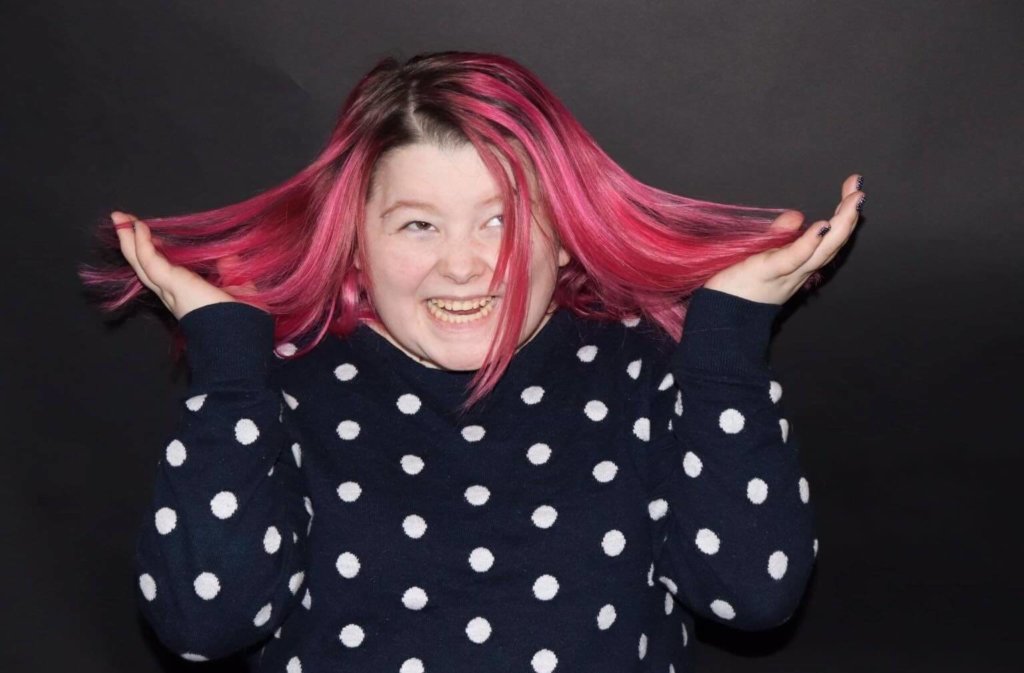 It’s hard to capture an infectious giggle in words, but that’s exactly what you get when you speak to Alicia.

Living with a brain tumour has been a lifelong endeavor for her. She was diagnosed at just six months old, and has undergone three brain surgeries, experienced loss of vision, and complications from multiple medications.

And yet, she laughs every day and is determined to inspire people by sharing her experience.

“To most people, being called a survivor is a huge compliment,” Alicia says. “But for me, living with a brain tumour is my normal.”

Her journey began when Alicia’s mom became concerned with her baby’s unexplained condition. She was “a very sick baby who was always thirsty and had a weird shaped head,” in Alicia’s words.

Her Mom also noticed that Alicia couldn’t see from one eye. Multiple doctor’s visits later, Alicia received an MRI. Later that same day, they were flown by helicopter from their home in Sudbury to SickKids in Toronto.

At eight months old, Alicia had her first brain surgery. Her diagnosis was Craniopharyngioma – a childhood tumour found in the pituitary area of the brain.

A side effect of the surgery, vision in her left eye was completely gone, leaving her with tunnel vision in her right eye. When she was just a toddler, another surgery resecting the tumour produced a scar that stretched from ear to ear.

It was only when Alicia had her third brain surgery at age fifteen, that she really understood the intensity of such a surgery. A keen student, she had arranged for the surgery to take place during March break. She went back to school on the Tuesday after March break and had a literary test the next day.

“I didn’t pass,” she laughed. “I was only off by a couple points, so I begged for leniency. They wondered why I was back to school so fast. Looking back, I should have taken a longer break to recover.”

This surgery helped relieve the daily headaches that Alicia had been suffering through, an outcome that was hoped for, but not guaranteed.

“I had to take nightly injections for growth hormone deficiency,” Alicia says. “I have to closely watch my fluid intake because of Diabetes Insipidus. When I get sick, it is a struggle because of adrenal insufficiencies. Since I don’t have a pituitary gland, I now take many medications to replace the hormones it used to make.

She still has yearly checkups with her doctors, and is happy to report that since her last surgery she has had no tumour growth.

Despite the lasting effects of her combined surgeries, having a brain tumour has also had a positive impact on Alicia’s life. She said her particular circumstances have made her cherish and appreciate things all the more, adding she has also helped motivate people – intentionally or not.

“They think I’m inspirational, she says. “But this is just my daily life.”

Alicia also attends the local brain tumour support group, saying it’s so nice to be able to connect with others.

“It’s helped me a lot” she giggles, “I call it my monthly therapy time.”

Her advice to everyone – brain tumour or not – is laughing every day.

“Find the funny. Find the bright side,” she says. “My brain tumour may have taken part of my vision but it will never take away my passion to make change in this world”.

Now, Alicia is in college studying to be an Early Childhood Educator, and has maintained a 4.0 average as well as making the Dean’s List. She says she wants to advocate for children with special needs, especially those with visual impairments. Not bad for someone who was told they wouldn’t graduate high school!