Alexander Rodzinka is an Undergraduate Science Student at University of Windsor

We are thrilled to learn that part of the work from this project has been moved forward. CIHR has granted more than $1 million for the project ‘Targeting Cell Cycle Checkpoints in Glioma‘. You can also read about this in this article.

Alexander was also featured in the local newspaper in September 2017, talking about his Studentship. Read more…

Despite the significant advances in understanding the biology behind brain cancer, treatments for patients with aggressive brain tumours, including those with Glioblastoma Multiforme (GBM) are inefficient. The protein known as Spy1, characterized by our lab, promotes cell growth even in the presence of DNA damage and in the presence of chemotherapy type drugs. We have discovered that the Spy1 protein drives aggressive and treatment-resistant GBM cells to expand their populations. This project focuses on discovering the importance of this protein in the persistence of this disease and determining the effectiveness of targeting this mechanism therapeutically. In this project, levels of Spy1 in human patient samples are manipulated using viruses, and the effects on tumour initiation, progression and response to treatment are measured. We have devised a model using Zebrafish where human cells are transplanted into the fish and drug responses are screened using a high throughput approach. A drug targeting approach is also being developed. The results from this study will assist in understanding how vigorous cancer populations, within select brain tumours, drive uncontrolled growth and resistance to present therapies; outcomes which may open new doors for the treatment of GBM.

About Alexander in his own words… 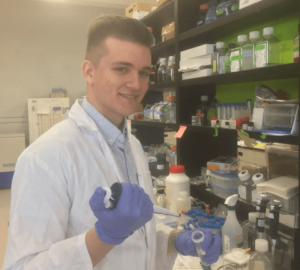 Being awarded a Brain Tumour Research Studentship means…
…Opportunity. In life, there are limited opportunities that are given to a person and I believe that the Brain Tumour Research Studentship is one of the greatest opportunities one can receive. As an undergraduate researcher, this Studentship gives me an opportunity to put more hard work and dedication into research and allows me to make a tangible difference in the field of neuro-oncology. More importantly, it is an opportunity that leads to potentially helping those families and patients afflicted by the disease. This is the main goal of Dr. Porter’s team along with Dr. Lubanska and myself over the next two summers.

My interest in brain tumour research was sparked as a high school senior where I found my passion and appreciation for science. After graduating high school, I made a goal to eventually be a part of any scientific research and possibly, if I was lucky, to be able to study the brain and its many nuances. Neuro-oncology is an area that drives my passion for a future in medical research due to the vast ambiguity of the brain. I was blessed to even have the chance to apply for this studentship, but to be accepted and to be able to work on something in which I am enthusiastic about is unimaginable.

I and the whole Porter Lab Team wholeheartedly thank Brain Tumour Foundation of Canada and the Taite Boomer Foundation for making this research possible. I promise to put my perseverance and all my efforts to make the most of this opportunity that you have graciously bestowed upon me.

Over the past summer, I have learned and utilized several in vitro and in vivo techniques essential for my project’s success. Importantly, I spent great amount of time optimizing the technically challenging injections of patient GBM cells into the brains of zebrafish, which is our in vivo model. This model allows cells to grow in a setting that mimics their natural environment.

Furthermore, I was able to obtain data from my work with in vitro GBM cell cultures. In collaboration with the Henry Ford Hospital System we obtained nine GBM patient lines of known genomic signatures. I mastered cell culture techniques involving the primary lines and began initial characterization. In order to dissect the Brain Tumour Initiating Cells (BTIC) composition of each tumour I performed series of flow cytometry experiments followed by magnetic bead sorting and Fluorescent-Activated Sorting (FACS) assays. These assays were conducted based on expression of known BTIC markers such as CD133 and CD44. Primary results revealed a strong correlation of specific marker combination within distinct GBM signatures, when three patient samples per subtype were tested. Performing the magnetic bead sort as well as FACS I was able to obtain a panel of several different BTIC populations which constitute an essential tool to determine the role of SPY1 protein in GBM expansion and therapy resistance, using both in vitro and in vivo systems. Through qRT-PCR analysis, I determined that there is a high significant correlation of SPY1 levels with specific BTIC populations which set a direction for assessment of potential new therapy targets and treatment strategies, however, still requires careful and detailed investigation.

Based on genetic information, GBM is grouped into three subtypes. This indicates that all GBM tumours are not exactly the same. With my research, we were motivated to look at GBM from another angle, specifically the cell surface markers. Understanding which specific BTIC populations within a GBM heterogeneous mass are driving tumour progression or drug resistance would be of utmost importance. Therefore, utilizing fluorescence activated cell sorting and magnetic bead sorting of the heterogeneous samples obtained from GBM patients, we were able to derive individual BTIC populations marked with well characterized surface molecules. Past data supports that when these markers are present on the surfaces of cells they are associated with characteristics like proliferation and drug resistance. With these subsequent populations, we then looked at different markers of proliferation and aggressiveness. In our research we discovered interesting correlations between a unique cell cycle regulator, Spy1 (or RINGO as named by other groups), and the markers tested for. Upon over-expressing Spy1 levels in low Spy1 populations we found that proliferation, aggressiveness, and therapy resistance increased. We have also begun in vivo studies of the certain populations derived from cell sorting and hope to continue these models in the future. With the different cell surface markers, I established a BTIC bank which will allow for further research into what role these populations play in tumours and will allow me to further dissect the role of Spy1 in GBM in vitro and in vivo.

Read more from the final report…