When people talk about the light at the end of the tunnel, they’re usually referring to a return to normalcy after a difficult time.

For Glenda, it was much more literal. She had lost her vision due to a brain tumour. About two weeks into radiation, she got a huge surprise.

“One morning I woke up and I could see,” she says.

But that’s jumping ahead in the story.

In 2018, Glenda was attending her daughter’s high school volleyball tournament when she was hit in the head with the ball. A couple weeks after that, her vision started to blur sporadically. She went to see doctors and specialists, but nobody knew what was causing it, or thought it was a possible concussion.

It wasn’t until Glenda went to an optometrist that she was referred for both a CT and MRI scan. The CT was clear, but the MRI told a different story. The day after the scan, she got a call from the neurologist confirming it was a brain tumour – an optic nerve glioma. 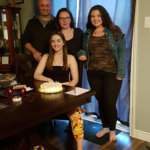 “I was kind of shocked for a while,” she says. “I was just mad… angry over the whole situation.”

It didn’t seem fair, she says. She lost her father to a brain tumour when she was only 13. Now, she was facing the same situation and was extremely upset about it –almost mad at the world, as she puts it.

Those feelings, she knew deep down, were not helping her at all.

“I didn’t know if I could go forward,” she says. “One morning I woke up and I don’t know what happened but I thought if I’m going to get through this, I can’t have this attitude.”

So, she decided to take things as they come. She is stable now, with two beautiful daughters and a husband to live for. There are still rough days, Glenda says. But they are fewer and further between. When dark clouds loom, there is a quote by Canadian artist Susan Gale that helps her through.

“Sometimes you don’t know your own strength until you come face-to-face with your biggest weakness.”

Because of the tumour’s location on her optic nerve, Glenda’s sight deteriorated – at first gradually, and then nearly completely. The neurosurgeon explained she had a 40 per cent chance of losing some or all  her vision with surgery. By her next visit, the tumour grew, and she was told surgery would result in a 100 per cent chance of vision loss.

It was recommended that she do radiation and chemotherapy. Meanwhile, her world had been reduced to grey haze.

About halfway through her 30 radiation treatments, she woke up and saw the world around her. Until that point, she had been preparing herself and her home for a life without sight, including learning to read the braille alphabet.

“I had myself almost prepared that I may never get my vision back,” she says. “It was just beyond amazing that I did.” 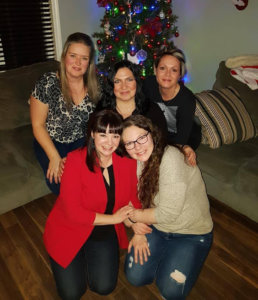 Glenda says if she can instill any message on people reading her story, it’s to be persistent and keep asking questions until you get answers. She knew something wasn’t right when her vision started getting blurry, but it was written off as a possible concussion. Because she was persistent, she was finally able to get the MRI that led to her diagnosis and treatment.

“It’s frustrating and it’s easy for people to want to give up and take it as it comes,” she says. “If one person says no, go to somebody else. Keep going and going.”

Back to the game… Glenda says she doesn’t know how long the tumour was there, but believes the jolt from the volleyball kicked it into overdrive. Her daughter’s friend – the girl who spiked the ball – felt terrible about it.

Glenda, however, believes it saved her life.