In May 2019 the Brain Tumour Registry of Canada was launched with the goal of collecting data on every malignant and non-malignant brain tumour in Canada.

Making sure every brain tumour counts.

What is the Brain Tumour Registry of Canada?

The Brain Tumour Registry of Canada collects data from every tumour diagnosed, to better understand prevalence and survival rates for brain tumours, and get a better picture on who is affected, and any possible causes. It was officially launched in May 2019.

What information is available through the registry?

The very first Incidence Report was published in May 2019, presents data collected between 2010-2015 in four provinces (BC, AB, MB, ON). The report breaks down tumour incidence according to several factors like age, sex, region and histology.

The first all-Canadian Survival Report breaks down 1, 2, and 5-year survival rates in the same four provinces, with the addition of non-malignant tumour data making this a first of its kind. A further report using data from all provinces and territories will be released early 2021.

Why is it important?

What does ‘making sure every brain tumour counts’ mean?

It means that every tumour has research value. The more information we have on all types of brain tumours, the better equipped our medical professionals are to provide the best possible treatment to each individual patient. A unique feature of the Brain Tumour Registry is that it features data on both malignant and non-malignant tumours.

Not only that, but having such detailed information on brain tumours helps secure funding for research, health care delivery and drug approvals by federal and provincial agencies.

How can I help?

Donations can be made toward the Brain Tumour Registry, to make sure we can keep it as up-to-date as possible, and ensure that medical professionals have the best information possible. 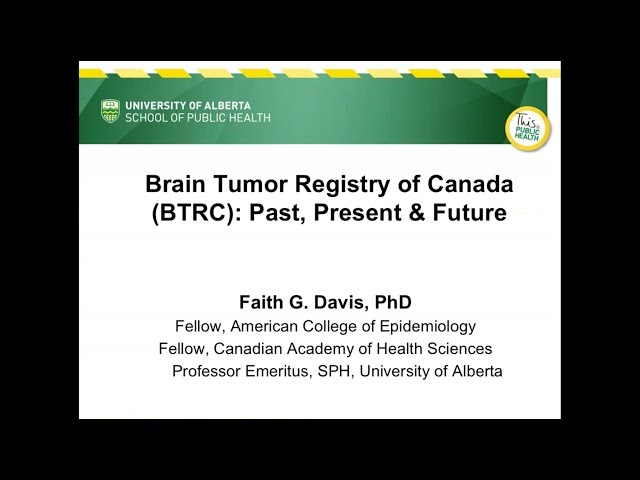 As part of the 2019 Brain Tumour Webinar Series, Dr. Faith Davis gave an update on the Brain Tumour Registry of Canada. This presentation includes:

Watch a recording of this webinar.

Help ensure that every Canadian brain tumour is routinely counted

Donate Now
Back to Top
Next Page