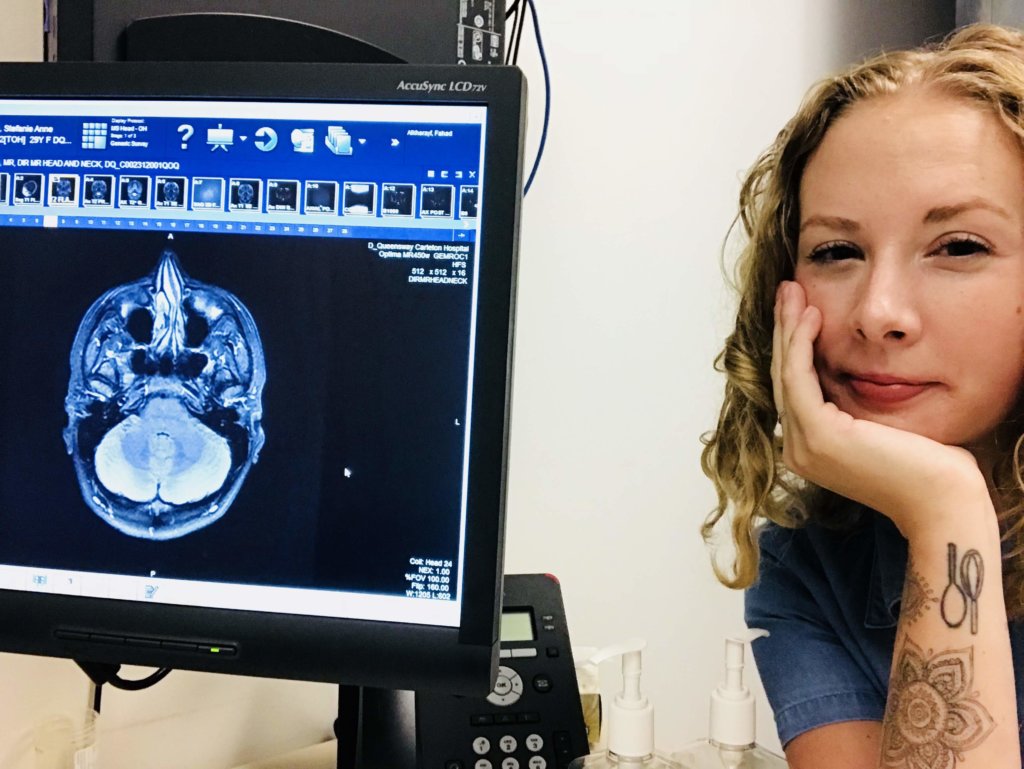 “I’m not glad I had it, but it taught me a lot,” Stef Scrivens says of her brain tumour.

“Looking at things positively and handling life as best you can are the two best things I learned.”

Her commitment to staying positive has helped her grow from a pediatric brain tumour survivor to an advocate and motivational speaker.

Hers is a unique situation – Stef’s brain tumour symptoms went hand-in-hand with the onset of puberty. At the time, it was easy to overlook because the partial seizures and minor headaches lasted for one week every six weeks. However, by the time she was 16, her symptoms got significantly worse. She never did have the tell-tale grand mal seizure, but she was having up to 20 partial seizures a day. It had gotten to the point where ‘normal’ just didn’t explain it anymore. So she started keeping track on a calendar.

Yet, the seizures were still occurring regularly – 10 days every six weeks. She could tell they were coming on by the appearance of auras and a metallic taste in her mouth. Seizures would last about 30 seconds, and when she came out of them, she had a headache as well as difficultly understanding words.

She is one-in-a-million in that Stef did not Google her brain tumour on the internet. Of course, as she is quick to point out, smart phones weren’t really a thing yet. Doctors still thought it may have been due to hormones.

But, in university her symptoms worsened, leaving her tired all the time. She took a year off to travel to Australia and within months, her seizure patter changed.

“As soon as that happened I knew something was wrong,” she said.

So it was back to Canada where she was diagnosed with a Stage 2 Oligodendroglioma.

Finding out she had a brain tumour finally provided answers for Stef. Until then, feeling bad was feeling normal.

“I was relieved there was an explanation for it,” she said. “It changed my life… I never thought it would be a brain tumour.”

There were two ways to deal with the news, she says. One way was to be angry and upset and the other was to be as positive as she could be.

“If I’m not going to make it, I don’t want to leave in a negative headspace.”

Stef underwent two craniotomies within the span of nine months. She was diagnosed in June 2009, had her first surgery in August and a second surgery in April of 2010. As a pre-med student at the time, she tried to look at her tumour through an objective lens. That would change in an unexpected way.

Stef was awake during her craniotomy due to the tumour’s location. Following that second round, her symptoms went away. She felt like a completely different person, she says. Stef was given the option of radiation and chemo afterward, but decided against it, since the second surgery was so successful.

Rather, she looked at things she could control in her life that would give her the best odds of recovery. The biggest contributor, she says, was diet. Stef has been off all medications for three years now, and credits this to a healthy lifestyle and healthy food choices.

What we eat, she says, is the one thing we are completely in charge of. Here’s where Stef’s newfound creativity came into play. After her surgery, the right side of her brain was unleashed, she says. Until then, she was relying mostly on the left, analytical side. Suddenly, medicine was no longer for her, and she took up other creative pursuits. Her passion for food and her creativity led to a successful career as a pastry chef, and she’s worked in kitchens around the world.

For the past two years (including the 2020 Virtual Brain Tumour Walk), Stef has been taking part in Toronto, including serving on the walk committee. The pandemic changed the game, she says, but she is still trying to fundraise and volunteer as much as she can.

“It was a quick pivot that we went through,” she said. “I really hope this can be in person again.”

Her experience with a brain tumour has given Stef perspective in her life. Most of the small things that we get upset about don’t actually matter, she says.

“You’re going to go through it one way or the other but for me handling it positively made all the difference.”

Stef shared her personal story of hope with Brain Tumour Foundation of Canada as part of its webinar series. You can view her talk here.