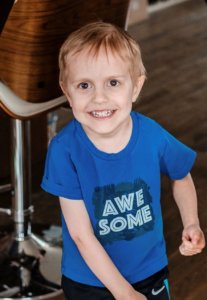 In June of 2020, Owen began to complain of a sore head when he laid down on his back. He began vomiting daily and developed regular headaches. We were initially told he had a virus, and that it would pass. When it didn’t, he was re-examined and taken to the hospital emergency room where a CT scan of his head revealed a large mass growing on his brain stem at the base of his brain and substantial swelling in his brain resulting from the tumour. He was admitted to Jim Pattison Children’s Hospital in Saskatoon where he was prepared for surgery to remove the growth. Three days after admission, his surgery was performed, taking approximately 12 hours to complete. The doctors believed that the tumour was completely removed. The mass was identified as a Grade 3 Anaplastic Ependymoma. Owen would require radiation on the area at the back of his skull, as well as chemotherapy afterwards in an effort to cure him for good.

Less than a month after the surgery, Owen had to be readmitted for a meningitis infection, delaying the start of his radiation treatment. The radiation treatments would be every weekday for 7 weeks. Toward the end of his radiation therapy, Owen had his first follow-up MRI completed to check on his progress after the surgery. On the second to last day of treatment, his family received the results of the MRI. The cancer had unfortunately spread to the lower part of his spine. These tumours could not be removed surgically. He was now palliative. Further information revealed that the specific subtype of ependymoma he had was not known to be curative, and was in fact, quite aggressive in its growth patterns in the 8% of ependymoma cases sharing this subtype, known to the doctors.

Owen would still receive chemotherapy but in a much less harsh regimen than originally planned, to maximize his quality of life. He was given a low dose of Etoposide orally every day in a 21-day cycle with a minimum of 7 days off before starting the cycle over. He also received another course of radiation treatment, this time targeting his spine. While the aim was no longer to cure his cancer, the radiation and chemotherapy were believed to be the best chance he had to extend his life. After this treatment ended in December, another MRI was scheduled in the spring. This new MRI showed there were more tumours in Owen’s spine, significant growth to the existing spinal tumours, and multiple new tumours in his brain, including a rather large one located behind his left eye. His prognosis went from possibly a couple of years to live, down to mere months, with the hope he would maybe live out the summer.

Despite all of this, Owen’s behaviour and abilities had not seen any kind of changes or deficiencies. He was still happy and energetic. That, however, changed in May of 2021. He woke up one Sunday morning early in May with a bad headache, and he became nauseous, vomiting frequently. He was given an increase in pain medications and eventually put on steroids as well as a host of other medications in an effort to keep him more comfortable. In a few weeks, he gradually started losing his balance and his fine motor skills. He became more lethargic and started having less of an appetite. Eventually, he had a generalized seizure and had to be taken to the emergency room for some anti-seizure medication. After that point, he could not walk anymore and steadily lost control of his limbs. He was bedridden for the remainder of his life, eventually becoming unable to eat, drink, speak, swallow, or even really open his eyes.

On June 25, 2021, at 5:49 in the morning, at his home, in his mother’s arms and surrounded by his family, Owen Robert Breker took his last breaths and gained his angel wings. His beautiful life cut far too short by cancer.

Treatments for childhood cancers are sorely underfunded and outdated, especially when they are aimed to treat more rare varieties, such as Owen’s cancer. In lieu of flowers, please consider making a donation below in honour of Owen, in support of pediatric brain cancer research.