Medulloblastoma (MB) is the most common malignant pediatric brain tumour. Previously considered as one disease, MB is now known to comprise at least four sub-classes with different survival. Based on early observations that MB with high levels of a strong cancer gene (MYC) was almost always lethal, Dr. Huang began studies to understand how to target Myc to prevent MB recurrence. Indeed, recent work has confirmed the MYC gene as a hallmark of the most lethal MB sub-class, called group C MB, which recurs fatally in > 60-70% of patients. These high-risk patients require innovative drugs and approaches which can only come from an in-depth understanding of the potent disease process in group C MB.

Prior work in the Huang lab has shown that turning on the MYC gene to high levels is enough to drive formation of rapidly growing, invasive and metastatic MB. Remarkably, recent data from the Huang lab also shows that Myc causes MB cells to shed tiny vesicles known as “exosomes” which can enhance the growth of other MB cells with low Myc levels and suggest that the most malignant high-Myc cells may use this novel communication mechanism to instruct other tumour cells or normal cells to promote a micro-environment that allow MB cells to persist despite chemotherapy or radiation. In this study, I will investigate how the MYC cancer gene uses these “exosomes” to alter the tumour micro-environment with the ultimate goal of devising therapeutics to eradicate these most treatment-resistant tumour cells. 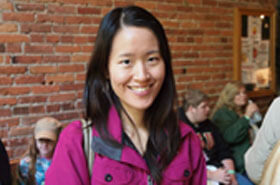 “I am very excited and honoured to receive this distinct award and feel extremely grateful for the generous funding. Being awarded the Richard Motyka Brain Tumour Research Fellowship is an important step in enabling me to achieve independence in my research. The funding will also support a project which will improve our understanding of metastatic medulloblastoma and may pave the way to the development of novel therapeutics for the treatment of this devastating disease. I would like to express my most sincere gratitude to the family of Richard Motyka and Brain Tumour Foundation of Canada for your contributions to the battle against childhood brain cancers.”

From the first report:

I would like to start by thanking Brain Tumour Foundation of Canada for awarding me this fellowship. It has been a pleasure and honour to work with the Foundation over the past few months.  Read the first report (PDF). Cathy opted not to return to the project.

Richard’s sister Alison and her husband Darrell, along with former business partner Howard Crone and his wife Michelle have played a vitally important role with the financial front in helping with the battle against brain tumours. Together, they have donated generously to Brain Tumour Foundation of Canada.

This had led to the creation of a research fellowship named in Richard’s Honour: Richard Motyka Brain Tumour Research Fellowship. The Fellowship is offered to help with the vision to find the cause of and cure for brain tumours while improving the quality of life for those affected. It supports the critical need for an increased focus on brain tumour research and enables young clinicians and scientists to enter the important field. These steps help to accelerates studies leading to a cure for brain tumours.

Help build Canada’s brain tumour research community by funding a Brain Tumour Research Fellowship. Contact us at 1-800-265-5106.
Back to Top
Next Research Recipient