Rajas Tipnis is in the BSC Honours program in Biological Sciences at the University of Manitoba. With his 2013-2014 research studentship, worked with Dr. Sachin Katyal on a project focused on malignant brain tumours. Here is an update from the Lab of Dr. Sachin Katyal, University of Manitoba and Manitoba Institute of Cell Biology at CancerCare Manitoba:

This studentship was funded in memory of Taite Boomer.

Current methods to treat the childhood brain tumour, medulloblastoma, are highly invasive and lead to poor quality-of-life. The targeted use of compounds that modulate DNA repair enzymes to affect tumour cell killing is an emerging tool in cancer chemotherapeutics. As studies have shown that the brain is especially susceptible to dysregulation of the DNA damage repair response, the project will investigate how this repair process co-ordinately affects brain development and how selectively modulating DNA repair processes in brain tumours may increase the efficacy of radio and chemotherapeutic drugs. Rajas’s research will serve to expand our knowledge of DNA repair neurobiology and translate his data into tangible next-generation cancer treatment paradigms with improved patient quality-of-life.

Over the course of two summers, Rajas will learn advanced cell derivation and culturing methods wherein he will use state-of-the-art genetic and biochemical techniques to modulate the expression of the DNA single-strand break repair factors Xrcc1 and Tdp1. Upon proficiency of these skills, Rajas will use advanced microscopy and single-cell gel electrophoresis techniques to perform DNA damage assays to measure the responses of cells to front-line cancer chemotherapeutics. Then Rajas will expand his use of mouse genetic models and incorporate analysis of medulloblastoma tumours in his research using the previous summer’s findings.

About Rajas, in his own words… 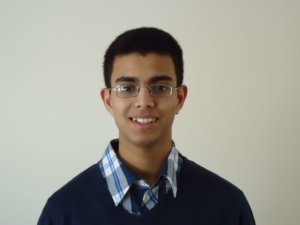 Being awarded a Brain Tumour Research Studentship means that donors are helping develop the next generation of research scientists such as me. This studentship assists me in reaching my career goal of becoming a brain tumour researcher. This award gives me a great deal of confidence in facing the challenges that lie ahead. I am extremely grateful for this award, and I look forward to conducting research over the next two summers and beyond to help fight brain tumours.

I am interested in brain tumour research because it deals with an extremely complex disease in an equally complex organ. Brain tumours are very difficult to diagnose, and even more difficult to treat due to their location. This leads to low survival rates for brain tumour patients. A great deal of research is still required to find a breakthrough treatment that permanently stops brain tumours.

I applied for this studentship so that I could experience brain tumour research first hand. Life sciences research has been my career goal for the last few years, and now I have decided on a future in neuro-oncological research.

The summer ahead is going to be very exciting, because I will not only be in a lab, but I will be conducting experiments and learning techniques that will serve me for the rest of my life. Working on a structured project with the goal of understanding how a part of the cell works is very motivating.

During the last two summers, Rajas has made some key inroads in identifying ways to target pediatric medulloblastoma (MB) cells through modulation of DNA repair pathways. As most frontline cancer chemotherapeutics in some way target the cell’s genome to induce cell death, there is a great deal of interest to harness the ability to modulate the tumour cell’s DNA repair activity in order to improve therapeutic efficacy. Rajas has performed numerous cell-based assays to track DNA damage repair activity in human MB cell lines. Using genetic techniques, Rajas inhibited the DNA single-strand break repair (SSBR) factors, XRCC1 and TDP1, in brain tumour cell lines and showed an increased susceptibility for these genetically modified lines to generate augmented DNA damage upon application of commonly used chemo/radiotherapy.  He also found that co-inhibition of these genes acted to synergize the formation of these breaks. Furthermore, as recent data has showed that ATM also participates in DNA SSBR, he found that further inhibition of ATM with XRCC1 or TDP1, could elicit an even greater genotoxic response, thus leading to increase tumour cell death. Rajas then took this data another step forward and used combinations of well-known inhibitors of ATM and the DNA SSBR pathways and showed that this synergized genotoxicity could be achieved pharmacologically, a validation of his genetic data and representing a more feasible approach with promising applicability in the treatment of childhood medulloblastoma.

Over the past two summers, Rajas has had a very educational and productive research experience. In pursuing the research goals specified in his Brain Tumour Foundation of Canada Studentship, Rajas has exceeded expectations by developing expertise in performing advanced cell culturing techniques and DNA damage repair assays.

I would like to take this opportunity to once again thank the Brain Tumour Foundation of Canada for their financial support of Rajas and the research project in my lab. Furthermore, I also would like to acknowledge the family of Taite Boomer, who helped make this Studentship stipend possible.