Low grade glioma (LGG) encompasses a heterogeneous group of primary brain tumours. Currently, the standard treatment of LGGs consists of surgery followed by chemotherapy and radiotherapy. Due to their heterogeneity, molecular subtyping of LGGs is routinely used in the clinic as a predictor of patient prognosis. Three LGG subtypes have recently been identified based on the mutational status of IDH1/2 and loss of chromosome arms 1p and 19q, where each display unique clinical, pathological, and genomic phenotype despite appearing similarly on histology. However, even with this new genetic insight, there remains a heterogeneous clinical response within each of the three LGG subgroups. We hypothesize that cellular aberrations other than IDH1/2 and 1p/19q status contribute to the intragroup heterogeneity. My role in this project will be to study the proteomics of formalin fixed paraffin embedded (FFPE) LGG tumour samples using a novel platform of mass spectrometry (MS). This method requires only 10 μm of tissue, allowing the submission of sections previously used on panel sequencing for MS. The integration between proteomic and genomic data in LGG cohorts will provide additional insight into the pathogenesis of brain tumours, and would ultimately result in better patient prognosis.

About Tae Hoon, in his own words… 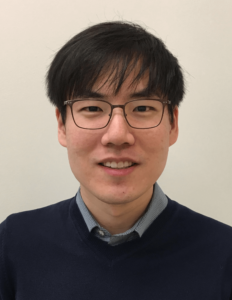 Being awarded a Brain Tumour Research Studentship means a lot to me. It is an opportunity for me to learn about brain tumours, contribute new knowledge to the medical community and build professional relationships with experts in the field. It also marks the start of my academic career.

My interest in brain tumour research stems from my long passion for understanding the brain and the complexity of cancer as a disease. Cancer is a disease that not only affects patients but also their family members and the society. Despite much efforts, the prognosis of brain tumours has not changed significantly over the past decade, and many researchers nationwide are trying to develop better diagnostic and therapeutic tools.

The Brain Tumour Research Studentship will allow me to join these leaders in a collaborative effort to end brain tumours and make impact on those affected by the disease.

I sincerely thank the Taite Boomer Foundation for their generous support and Brain Tumour Foundation of Canada for giving me this opportunity to work on brain tumour research. It is time that we make further progress in the field, and I am excited to be an integral part of it.

The purpose of this research was to validate and identify novel biomarkers in low-grade gliomas by utilizing a new platform of mass spectrometry-based proteomics. The first phase of the project was obtaining samples and preparing them for large-scale analyses. I have identified and catalogued 163 formalin fixed paraffin embedded (FFPE) blocks and snap frozen tissues. These were then grouped based on their genetic alterations, of which 67 are oligodendrogliomas (IDH1/2 mutation and 1p/19q codeletion), 56 are astrocytomas (IDH1/2 mutation and no 1p/19q codeletion), and 40 are glioblastomas (wildtype IDH1/2). After assessing for their quality, proteins and DNA/RNA were extracted from 120 samples, consisting of 48 frozen tissues and 72 FFPE sections. The frozen tissues were extracted after evaluating for their cellularity, whereas the FFPE sections were dewaxed with xylene prior to extraction. A total of 360 extracts have been prepared using the SP3-Clinical Tissue Proteomics protocol or the AllPrep DNA/RNA/Protein Kit, and quantified for analyses. We are currently transitioning into the next phase, and synthetic peptides are being generated for a targeted proteomics approach. Once in the next phase, the data from proteomics will be combined with genomic and transcriptomic data to find distinct molecular signatures that correlate tumour biology to clinical behaviour. The results from this study will allow for stratification to better define novel intragroup biomarkers that may inform about the clinical behaviour of low-grade glioma patients.