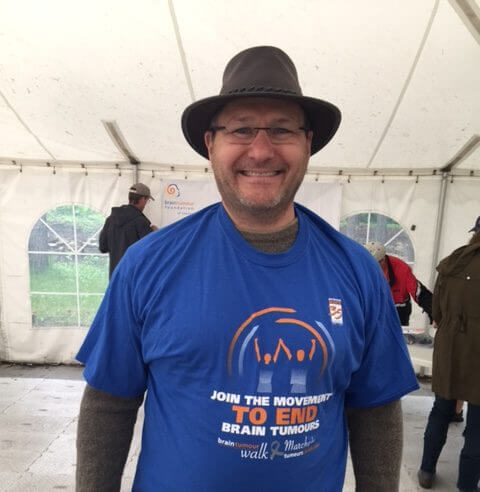 Lawrence, a successful businessman, is not one to take a decline in memory lightly. Lawrence was in Winnipeg, at home on leave from his job in New York City when he had his first seizure. “I couldn’t remember names; my cat, my brother, my parents. It would last half an hour at a time.” He went to his doctor, who told him that as he’d just turned 50, he would likely experience memory decline.

“I’m a science guy.” said Lawrence. Having thought about it, he went back to the doctor the next day and said: “These episodes are not random. The names I’ve known the longest come back first, and the newest names come last. It lasts for half an hour at a time. Something is wrong.” Lawrence pushed for and got a referral for an MRI. The doctor told him it could take months before he got an appointment. Not taking that advice, he called the hospital and asked them: “Is this like a dentist appointment where people cancel at the last minute?”. Told to come in, the next day he took a book and was prepared to wait. Sure enough, there was an opening.

“Before the MRI was even complete, I knew something was wrong. The doctors came in to give me the news. They prescribed anti-seizure medication, told me to pack everything up and gave me six months to live”. The size of the tumour meant that they were not prepared to operate.

Two years prior, Lawrence had met a well-known Canadian neurosurgeon at a conference. “So, I called him. He told me he would get my files and to fly to him. So, I flew to Calgary”. This neurosurgeon told him that his tumour was big, warned of the risks; it was likely that he’d be paralysed, lose his vision, spend six months in rehabilitation, but he’d operate. Two days later, Lawrence was in the operating room. “After the prep work, I woke up and said: “Hey, what are you up to?” to the surgeons, followed by “I told you, you gotta knock me out!”.” This was not supposed to be an awake craniotomy!

After the 14-hour operation, Lawrence woke up in recovery. He ripped out his lines and ran to the bathroom, wanting a shower… The nurses helped him back to bed. The next day the doctors came to perform post-surgery testing, to find Lawrence sitting up in bed doing Sudoku with his brother, demanding ribs for lunch. “Not bad for a guy who was supposed to need six months of rehab”. Four days later, Lawrence was on a plane back home.

In Winnipeg, Lawrence had 35 radiation treatments and 10 months of chemotherapy. He didn’t miss a day of treatment, followed the diet a nutritionist recommended, and had no side effects from treatment.

In order to get his driver’s license back, Lawrence pushed for more testing on his tumour, which has been referred to as three different types, and had an EEG which discovered that he uses both sides of his brain equally. “Somehow my brain adapted in the lengthy time it took for the tumour to grow” explained Lawrence “and I got my license back immediately”.

This was 7 years ago. “I’m still here” said Lawrence. Since then, there have been no signs of growth at all on Lawrence’s tumour, and Lawrence has been knocking items off his list.

The number one item on Lawrence’s list was fly fishing. “I took a lesson in Calgary, then flew out to fish with my brother. He was surprised by how well I handled it” Lawrence laughs, “it wasn’t ‘til I was coming home that I told him about the lesson”.  Other list items include climbing the Wapta Ice Fields, hiking the Cabot Trail on Victoria Island and a surfing lesson in Tofino. “I wanted to know what it felt like to surf. I was the only adult with four kids, who asked if I was their teacher”, laughed Lawrence.

Lawrence also gives back, sitting on the board at ‘A Port in a Storm’, a home away from home for cancer patients in Winnipeg that helped Lawrence while he was undergoing treatment and couldn’t drive. Lawrence is also an active participant at Brain Tumour Walk events.

He also continues to think of others and educate himself about brain tumours, which is why he is an advocate for the Brain Tumour Registry of Canada.

“When I was diagnosed, seven years ago, I went to an event where the researcher talked about how the data he was using was extrapolated from data from the USA and applied to the Canadian provinces. It’s so important that researchers use Canadian data.”

Lawrence was so passionate about this Registry that he drove to Alberta, to meet Dr. Faith Davis, the lead epidemiologist behind the Brain Tumour Registry of Canada. “I was maybe a little harsh” Lawrence said, “but I was terrified and horrified that Canada didn’t have a Registry”.

Lawrence is thrilled that the Registry was launched in May 2019, so that doctors can get the information they need. The next report from the Registry, due later this year, will be on survivability. “As a seven-year survivor, I need my brain tumour to count. I need researchers to understand why my tumour is not growing. Others need this information so that they can be in the same situation, with their tumour not growing”.

With all of his achievements, clearly his proudest accomplishment is his two children. “My son is a geo-physicist and my daughter is back in school studying film production. Both kids have graduated, both are married, and there’s a grandchild on the way. My kids lost their Mom to cancer eleven years ago, they watched me through my brain tumour diagnosis, I can’t believe how happy they are. It blows me away.” Lawrence continues with a chuckle, “My Mom’s in her 80’s, she tells me, “Remember, I die first”. I tell my kids: Be happy, live happy. I’m so happy that they’re happy. I feel blessed that things are going so well.”