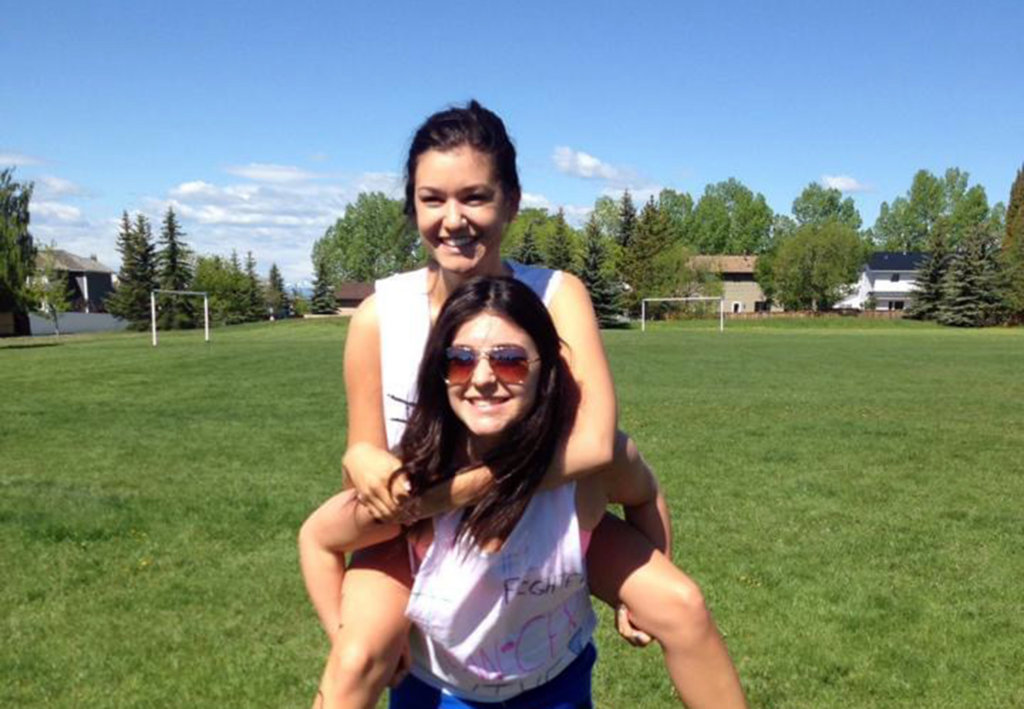 No matter where you live in Canada, Brain Tumour Foundation of Canada is here to help.

For Natalie Galarnyk and family, their relationship with the foundation began following her sister, Katrina’s, glioblastoma diagnosis in 2013. A friend referred them to the braintumour.ca website, and from there, a lasting connection was made.

Not only was the Brain Tumour Foundation of Canada website a source of valuable information, attending the Calgary Brain Tumour Walk provided them with a sense of community, and normalcy.

Team Galarnyk was the biggest team at what was then a relatively small event.

Going to that first walk was an emotional experience for both Katrina and Natalie. Being able to share their feelings while surrounded by people who truly understood helped them feel that someone was behind them through their struggles. Sadly, Katrina passed away in 2015, but the family continues to find hope and solace at the walk.

“The walk was our one day of the year we could come together as a community and as a family,” Natalie says. “It made us feel that sense of community – that we really had people behind us and supporting us.”

She says she wants to spread that support to other people, and help raise the profile of Brain Tumour Foundation of Canada.

As much as the walk is only one day a year, it was one of the family’s main supports over the years, and Natalie says she is happy to give back.

Last year, she and her fiancé and their dogs went out for a trail walk as part of the Virtual Brain Tumour Walk. This year, she says, they will be doing something similar.

But the walk is just one day a year. What about the other 364?

Natalie’s advice for anyone with a family member affected by a brain tumour is twofold.

Soak up every moment, but know that it’s okay to lean on people for support. “Accept the help you are receiving,” she says. “Make sure you’re always accepting what people are doing for you and being open to the help.”

It’s a common thread for caregivers across the brain tumour community – the need to take care of themselves too, even when times are at their toughest.

“A lot of people forget that,” Natalie says. “You need to focus on yourself too. Without you taking care of yourself, you can’t be there for anyone else.”

Her sister viewed her brain tumour as something that strengthened relationships, and brought people together. She knew how to appreciate life, Natalie says, and focus on the positives even amid all the bad.

“It’s a privilege to be here and we really need to make sure we’re appreciate the moments we have,” she says. “I could have dwelt on the whole situation of losing my sister  – we thought, ‘Why us?’ – but in the end it makes you take a step back and look at all of the moments you shared.”

Live in the moment

It’s easier said than done though, she says. In the thick of her sister’s illness, Natalie didn’t know how to take that step back. It’s only through a retrospective lens that she is truly able to.

That’s why she wants to share that message with families across Canada who are facing similar situations to her family’s.

With her diagnosis, Katrina made the decision to make the most of the time she had. Doctors had given her months to live. She fought for two and a half years, with her family by her side.

Their parents had separated years prior to Katrina’s diagnosis, but when she became palliative, they moved back in together to care for her. It was the first in a long line of family members from across Canada who came and stayed with Katrina and family.

“Family was her most prized possession.”