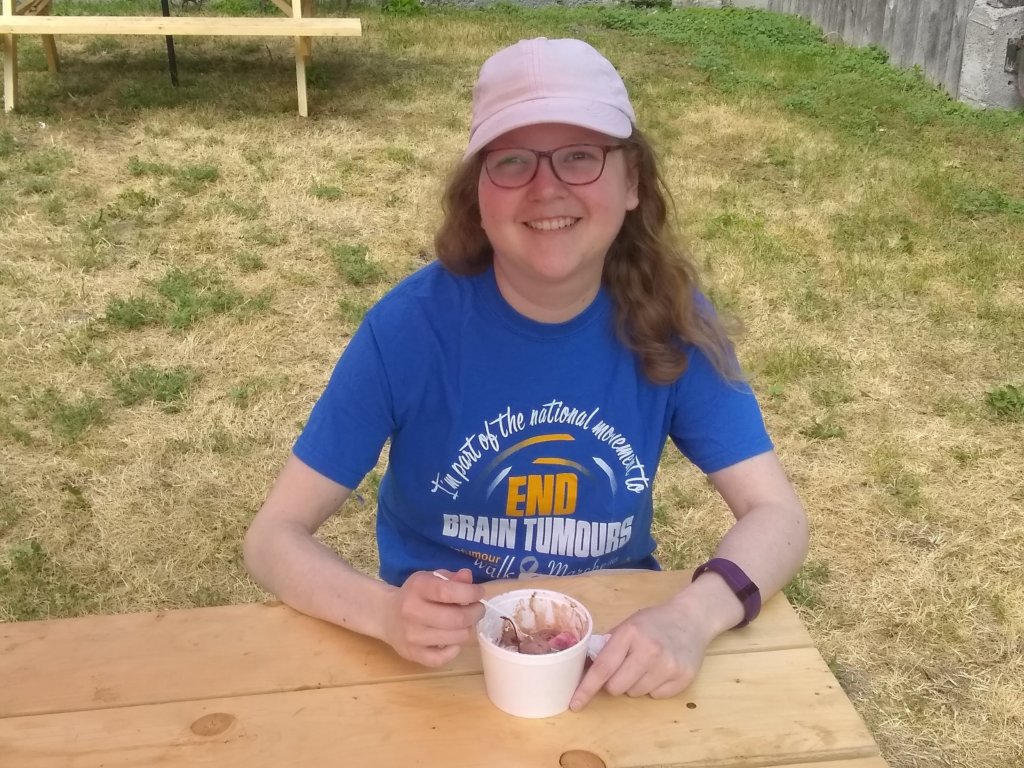 Find your path and follow it, and don’t let the obstacles get you down.

That’s just some of the advice Stephanie Doucet shares with her fellow brain tumour survivors, though it easily applies to everyone in life.

In April, 2016, Stephanie was fresh out of university when she began to experience terrible headaches. She visited her doctor, but says she had a hard time getting them to take it seriously. Eventually she was diagnosed with a meningioma, and was rushed to emergency surgery – the first of two craniotomies in the span of nine months.

Following her first surgery, she enrolled in college. Part way through her first semester, the headaches returned and in January she was back in hospital for another surgery.

“They got it all and I went back to school and finished that program,” she says. “I’m lucky I had a good surgeon who was not afraid of getting right in there.” Stephanie didn’t really know what she wanted to do after graduating from her veterinary assistant program. But, while recovering from surgery, she was introduced to a new friend – Stella.

“My neighbour found out I really liked animals,” she says. “They told me, ‘Our dog’s at home all day alone, we could bring her over and you can watch her all day.’”

So began her relationship with Stella, who Stephanie says has become “kind of a therapy dog for me.”

Since Stephanie wasn’t working, she was offered a job dog-walking Stella, and the two have been inseparable since.

It would be easy to give in to negativity, Stephanie says. She was diagnosed with a brain tumour at a time when she was ready to begin her life in earnest. She lost her vision in her right eye as a child to leukemia, and the hearing in her right ear, and feeling in the right side of her face decades later to a brain tumour. Taken all together it can get you down, she says. But she’s found plenty of ways to overcome it. It doesn’t mean every day is great, of course, but when things look bad, she is able to steady her course again.

“The big thing is to have people to trust and support you,” Stephanie says. That, and being thankful for what you have, rather than what you’ve lost.

“I can’t see out of my right eye. Some people might let that get them down, but so what if I can’t catch a ball or watch 3D movies?” she says. “I always remind myself things could be worse but they’re not.”

Living for the moment and taking life one day at a time helps give Stephanie a sense of control and perspective. Looking to far ahead, she says, can lead to frustration about missed opportunities. When that happens, it’s important to take a step back and focus on the moment.

Stephanie is shy about her Catholic faith, but like so many people affected by brain tumours – and people in general – faith is a source of comfort and perspective in an otherwise turbulent world. It’s how she stays grounded, she says.

Music is also a source of comfort for Steph, who is a big fan of Hunter Hayes – in particular his song, Dear God, where he asks his creator if it’s possible he makes mistakes. Doubt is a part of growth, Stephanie says. Getting past it only requires a single step.

“I think of these paths in life,” she says. “If you come to a fork in the road you can spend all your time deciding which way to go. But just pick one and start going down that path. If it’s not the one you want, you can always go back.”

Maybe one path will take you somewhere you didn’t know, she says. Even if the destination isn’t what you had in mind, it may lead you somewhere new and wonderful.

Steph’s father originally looked up Brain Tumour Foundation of Canada after picking up a handbook at the hospital. Stephanie was going through some anxiety at that point, and she says she first got involved with the organization by attending a young adult retreat. She says the experience was very meaningful, being able to connect with other people like her.

Being from a small town, there were no other young people with cancer she could connect with, and attending events like the Relay for Life, she always felt on her own because the crowd in her area was much older than she was. The young adult retreat changed that. She met her peers.

“It was basically 20 years later that I finally met another childhood cancer survivor,” she says. “I knew there was potentially other people like me, but I didn’t meet any.”

Stephanie is speaking later this year as part of Brain Tumour Foundation of Canada’s webinar series, sharing her message of perseverance and positivity.

Above all, she says, stay true to yourself.

“See every obstacle as an opportunity to be a stronger you,” she says. “Maybe you’ll even gain a new perspective.”