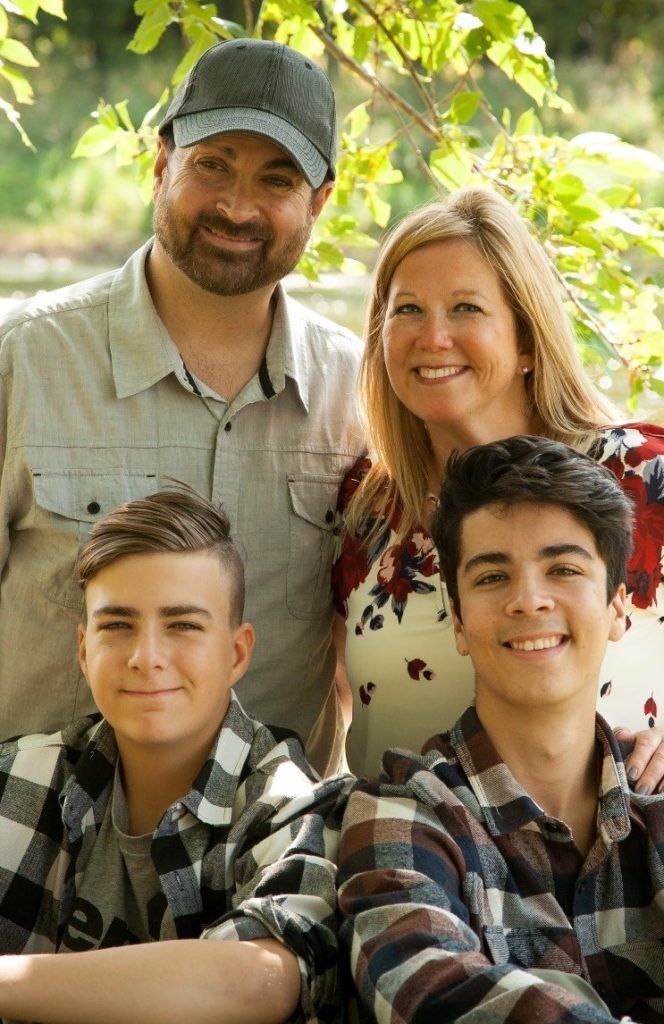 “Today, 8 Canadians will learn they have brain cancer. That’s 3,000 Canadians each year. In addition, every day a further 19 Canadians will learn that they have a non-malignant brain tumour. Non-malignant brain tumours can be just as life-altering as malignant tumours. October 24, 2019, is the second annual Brain Cancer Awareness Day in Canada. International Brain Tumour Awareness Week, is October 26 – November 2, 2019” – Brain Tumour Foundation of Canada

In Sept 2004, my husband Rob was 30 yrs old and I was 8 months pregnant with our second child, days away from leaving work to begin a special time on maternity leave, and time at home with my 2.5-year-old son. We saw such a bright future ahead of us and could never have anticipated what the next 15 years would bring. After months of struggling with symptoms and trying to figure out what was going on, Rob saw his family doctor who requested a CAT scan right away. He credits the baby-on-the-way for prompting him to finally visit the doctor to get things resolved.

The scan revealed a very large brain tumour and he was scheduled for a craniotomy within 48 hours. It turned out to be a stage 3 Anaplastic Astrocytoma and during his recovery time, I also went into labour and we delivered our second son. This was a very scary time with many unknowns, crying and sleepless nights however the baby brought much-needed peace and comfort to our family. Rob’s tumour quickly became aggressive so he underwent his lifetime dose of radiation daily over 5 weeks, followed by 26 months of very, very intense chemotherapy. He was young enough to absorb the high level of toxins and this was his only shot. It knocked him on his butt for years. Rob was unable to work for years and I was on maternity leave, taking care of Rob, a very busy toddler boy and a newborn baby. I also was unwell as I experienced a medical trauma during labour due to how weak I had become. Thankfully, our family and friends stepped in with meals and to help with the family’s day to day routines for the first month or so. Being stubborn and independent, it was very challenging to accept help however we didn’t really have a choice. After that critical time, many continued to support us with love and care, for which we are forever grateful. (Always remember the power of even a simple text to check in!)

In 2007, Rob was able to return to full-time work successfully and was even able to begin coaching hockey with our 5-year old’s team. This son also started kindergarten at that time, and it seemed like a brand new chapter for our family. We exhaled and then jumped right back into everything and just craved “normalcy.” We didn’t share with new friends the battle we had just survived. Our entire family grinded daily to continue our healing journey – physically, emotionally, financially etc. My husband’s condition was stable until 2016 and through those years, we focused on our young family and having fun times together – travelling, camping, getting caught up and just regular routines at school and work etc.

In Feb 2016, most of the chaos from the past decade was behind us. Not forgotten, but carefully tucked away and revisited every 3 months at Rob’s regularly scheduled MRI appointments (which I’ve always attended with him, never missing one.) At this time, I was in a new role at work and we were so confident at this point, that I decided to miss an appointment with Rob for the first time in 12 years. He was alone when he heard the devastating news that the cancer had come back and we would need to go back into battle.

I remember him calling me at work and the flood of emotions that came over me immediately. At this time, we both went into shock and experienced PTSD for years. Although our two sons were older now (14 and 12) it was very difficult to have to tell them this news. Rob faced his second brain surgery with bravery and his main concern was how his boys would see him differently. He always wanted to appear strong to them, like one of their Marvel superheroes. My sister had bought him an NFL headcover and Rob insisted that the nurses have this placed on him before his sons came in to see him after surgery. I will never forget the long walk that my older son made with me down the dimly lit, long hospital hallway towards the recovery room. In our family, we have all had to be courageous and become heroes for each other.

Rob could not receive any further radiation but began another long year of chemotherapy and appointments. He was surrounded by much love and support and by fall 2017, he was able to return back to work full time once again and back to coaching at the hockey rink. His team of professionals marvelled at how thick his medical file had become – each visit and milestone chronicled over a dozen years. (They don’t like to see the thin files…)

This summer we had another scare with some questionable MRI results however it miraculously turned out in our favour this time. This October, our nerves are completely shot but Rob is currently cancer-free, our oldest son Ben will graduate high school in June, and our younger son Adam – born at such an extremely stressful time in our lives – just turned 15 last week.

This Thanksgiving, we had so much to be grateful for and continue to live a life of Hope, Love and Gratitude. I am sharing our family’s story as part of International Brain Tumour Awareness Week.