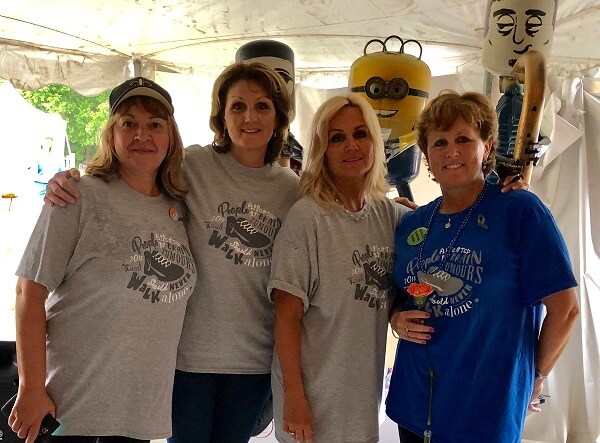 Usually surrounded by friends and family, Lynn was alone when she heard the words: “I’m sorry to inform you… an abnormal lesion… aggressive”. A brain tumour.

Lynn had been ignoring the initial symptoms that started two years prior to the diagnosis, attributing them to a new job, or getting older. She did see an audiologist for tinnitus in her left ear and about dizzy spells, which she thought were vertigo. Headaches were taken care of with Advil, and a visit to the optometrist did not show any cause. When the headaches became debilitating, Lynn finally sought medical attention. An MRI found the brain tumour.

Within minutes, she was prescribed steroids and anti-seizure medications. Blood work was taken, and an urgent appointment was arranged with a neurosurgeon. That day, faced with an uncertain future, Lynn began journaling to formulate her thoughts, along with a plan about how she would tell her family. Even though she was scared to tell people, Lynn was reassured by their offers of help.

The neurosurgeon told Lynn that while he thought the tumour was a non-malignant meningioma, it was so large that it needed to be removed in approximately three weeks time, the delay was to give the steroids a chance to shrink the edema. Living close to the American border, Lynn requested a second opinion, which confirmed the way forward.

“I had never felt such a total loss of control over my future, my health, or my life. Fear is an intense emotion. The only option was to place my trust in the surgeon and medical team. However, I did have the ability to control my mindset, responses, personal will, and determination.” Lynn remembers. Lynn used that positive mindset to research more about her tumour, using information on this website to find out more about meningiomas. 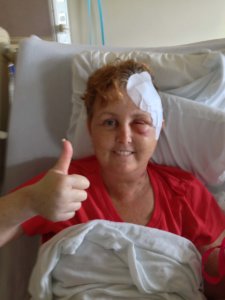 Lynn’s surgery was successful. “I could feel, move, hear, and speak. I even remembered my second language”. Recovery would take a while. Through the fog of fatigue, Lynn focussed on the small tasks. She broke big tasks into smaller parts and urges others to do the same: “As insignificant as these simple strides may seem at the time, they will become great triumphs when you put them all together!”

Lynn’s recovery was further complicated by issues caused by her medications. Some erratic behaviour caused a family intervention, after which she was told not to cook, email, or even call anyone without someone else there. She was admitted to hospital with an expected brain bleed. An adjustment to her medication was needed. “Whether we are the caregivers, or the ones being cared for, we all need patience to steer through this turmoil.”

One month after surgery, the neurosurgeon confirmed the diagnosis of a non-malignant brain tumour was correct, and that the entire tumour had been removed, with no need for chemotherapy or radiation. Monitoring of the tumour site would continue.

6 months after surgery, Lynn was assessed to gradually return to work. She had some tricks up her sleeve to support her memory. Her neurosurgeon had warned her that it would be a full two years before her brain would be fully healed and encouraged Lynn to rest when she needed it. 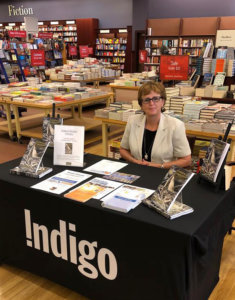 Lynn used her recovery period to write a book, ‘Steering Through It’ about her experience. Using her journals, and those of her family members who have also written in the book, she hopes to help others on the brain tumour journey. In the book, she urges people to use the resources, information and support groups that we provide. “Having facts that are reliable and grounded in research can empower us to avoid misunderstandings, to make informed decisions, and to be better prepared for the possibilities. Let’s all help each other stay afloat.”

While Lynn has been through some rough waters, she says (spoiler alert): “I am a survivor with a new perspective, and I would not have it any other way. The waters are calm and the course before me is now clear.”