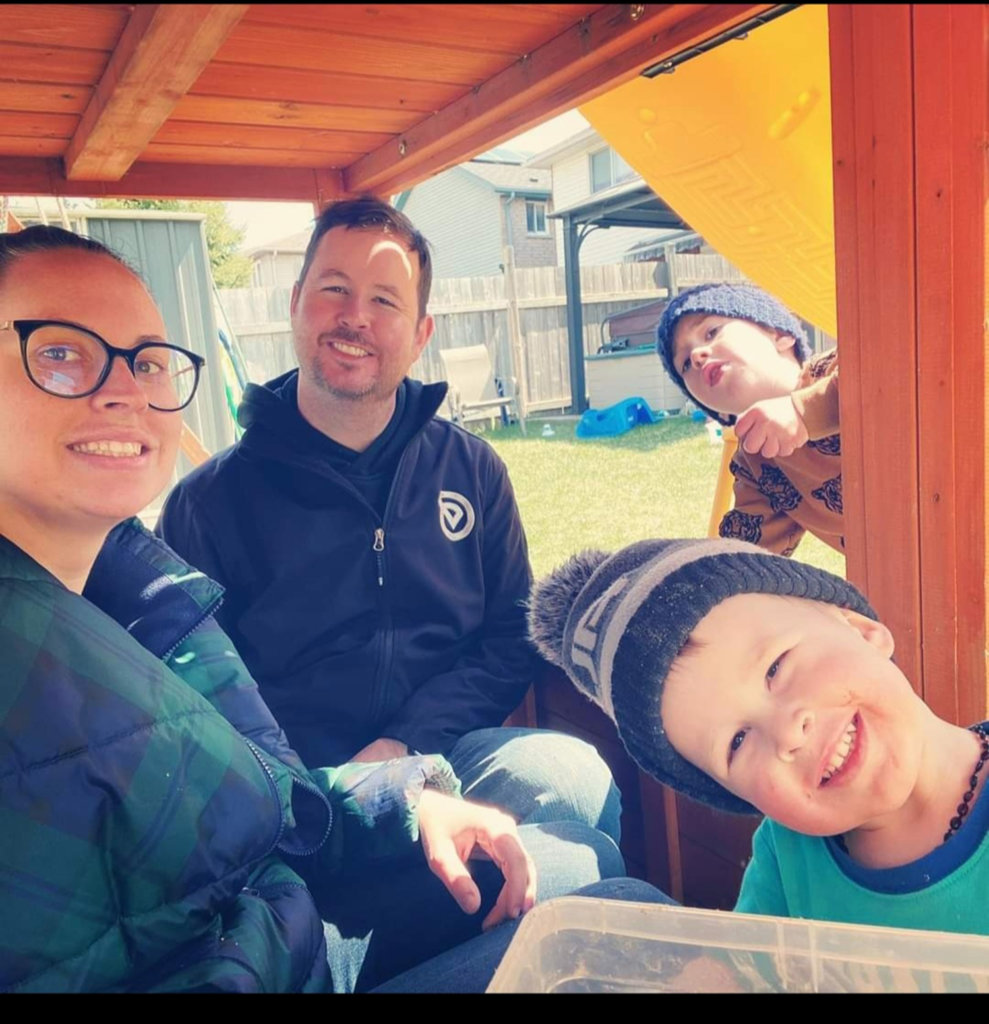 March Break, 2020, in Ontario was unlike any other.

The province had shut down schools, leaving parents and teachers – of which Sam is both – scrambling to move their classes online.

And, as it happens, Sam began to experience intense headaches.

Doctors thought it was due to stress, and after visiting the emergency department, she was given migraine medication. It worked for a while, but once the medication ran out, the headaches came back. By July, they became unbearable.

“I had a really bad night one night,” Sam recalls. “I was crying, and it just hurt so bad I couldn’t sleep.” The next day, she couldn’t move. She was too tired to do anything. Her husband, Jeff, took her to the emergency room once again, where Sam was exhibiting confusion trying to describe the reason for her visit.

That was all the doctor needed to send her for a CT scan, which revealed a large tumour on her right frontal lobe. She was transported to Hamilton for surgery, where they were able to remove three-quarters of her tumour. Any more, the neurosurgeon said, and it would have left her paralyzed.

Sam did radiation and chemotherapy, but the tumour had regrown, so she was sent for a second surgery in December 2020. During that surgery, Sam had a stroke, which resulted in her left side being weakened.

Because of various complications, including blood clots, infections, and troubles healing, she’s had two additional surgeries in January 2021 and March 2021 with a possible fifth surgery to come…

“I need to learn how to walk again,” she says over a phone interview from her hospital room. “My arm and my leg don’t move when I need them to move anymore.”

She’s been in the hospital for five months now and is anxiously awaiting the day she can head home and see her kids. Because of pandemic restrictions, she is only allowed outside visits, with rare exceptions for special occasions such as Christmas and her son’s birthday. Sometimes, her husband is able to take her outside in a wheelchair to see her kids.

“They make me have a little bit more hope and lift my spirits a little bit,” she says of the family visits. “Especially getting outside, too, instead of staring at these walls.”

Her sons, aged five and three, are doing okay Sam says, though they are having a tough time processing mom’s condition. Her eldest, she says, is frightened of her incisions and her youngest thought she didn’t have legs because she is always either in bed or in a wheelchair. During her time in hospital, Sam also tested positive for COVID-19. However, she’s had one positive and one negative test, and her family all tested negative despite having an outdoor visit during what would have been her infectious period.

The thought of going home to her kids is what keeps her going, she says. That, and eating something other than hospital food. Luckily, Jeff brings her food when he comes to visit, as does her dad, whose homemade meals are excellent – particularly his soup, she says.

Still, she would give anything for a cup of real coffee. Running on no caffeine is just not her normal state, she jokes.

Sam says telling her story helps her process things. Jeff has also done a great job of documenting everything, she says, as well as holding down the home while she’s in hospital. He talks to the doctors, gets regular updates, and organized a team in this year’s Brain Tumour Walk.

“Brain cancer is tough,” writes Jeff on the team’s walk webpage. “But Sam is tougher, and she’s one-step closer to her full recovery!”

Sam is currently in physiotherapy, getting one step closer to taking part in the walk alongside her sons.