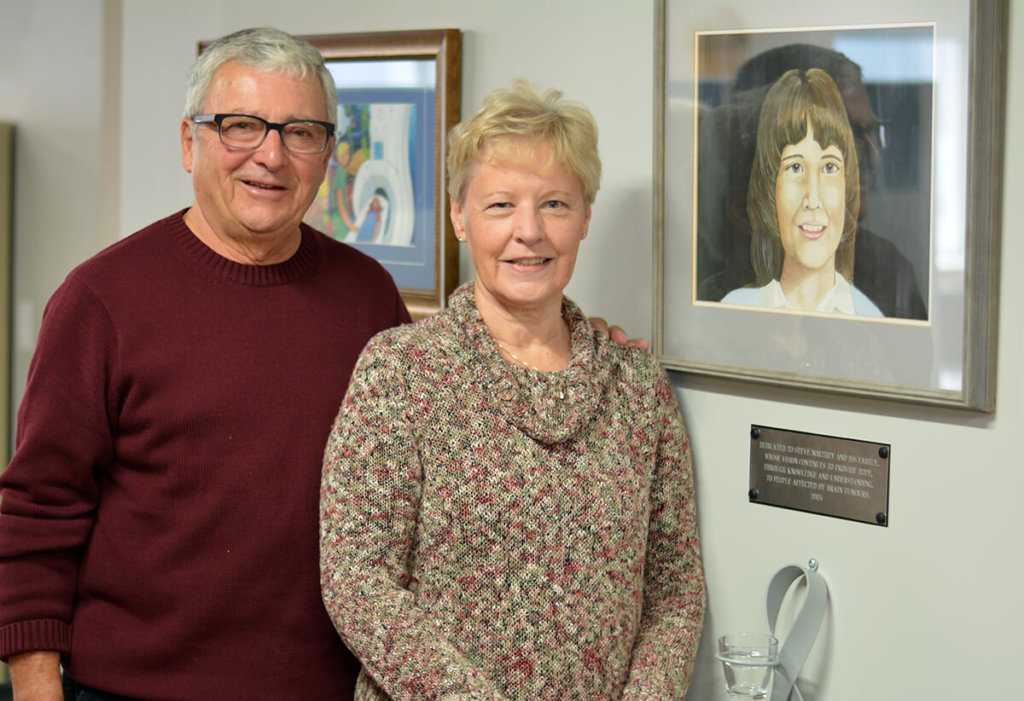 At the very first Brain Tumour Walk back in 1993, Brain Tumour Foundation of Canada co-founder, Steve Northey, held his then year-old granddaughter, Cassidy, in his arms while addressing the modest crowd at London, Ontario’s Greenway Park.

This year, as they have every year, Steve and his entire family will be taking part in the June 27 event that now spans the entire country.

That first year, the London Spring Sprint was initiated by Brain Tumour Foundation of Canada’s Executive Director at the time, Sue Barnes, who approached a local business, The Running Room, about doing a sponsored run to benefit the foundation.

Prior to the first Spring Sprint, Brain Tumour Foundation of Canada was partnering with a local 3-on-3 basketball tournament to fundraise. However, the cost versus return just wasn’t there.

Then one day, someone came into the office with a $500 cheque from a small community walk…Steve remembers stating at the time, “That’s the kind of thing that could really develop into something down the road,” “I don’t know if we ever really saw it expanding so quickly across Canada.”

It was a concept that caught on with the support groups across Canada, leading to more and more Spring Sprints and ultimately, the Brain Tumour Walk program that we have today.


Steve says. “It was just a really fun event, like a big picnic that brain tumour survivors, their families, and friends could take part in together”.

The Spring Sprint was an opportunity to bring everyone together and promote awareness of brain tumours, while simplifying the fundraising process.

The first London Spring Sprint brought in about $15,000, and was seen as a huge success. And it was… at the time. Now, the city averages more than $200,000 each year, and the organization has raised millions of dollars across the country.

“It gave us an opportunity to give back to the people we served instead of just being on the phone or at a support group,” Melodie says. “We could meet people, and promote the awareness of the foundation to attendees and the media.”

“We’ve always thought that it’s a good way for families to get together and do something,” Steve adds. “You only have to ask your friends and neighbours for one major fundraiser for the year.”

Back in 1982 when Steve Northey was meeting around the kitchen table with Pam and Rolando Del Maestro, they could never have imagined Brain Tumour Foundation of Canada growing into the national organization it is today.

The steady growth of the Brain Tumour Walk program has raised millions for Brain Tumour Foundation of Canada, and enabled the organization to vastly expand its support network across the country, as well as pour much-needed dollars into research.

Brain Tumour Foundation of Canada’s BrainWAVE program has been providing children affected by brain tumours and their families with fun opportunities to put aside their cares for the day and just enjoy the activities and one another’s company.

It’s all about the people

The Northeys say they are extremely proud of the staff and volunteers of the organization.

“The Walk was probably the biggest fundraising step forward for the organization,” Steve says. “It has provided the opportunity to raise money towards accomplishing our goals to help the over 56,000 Canadians each year coping with the diagnosis of a brain tumour. We are very much appreciative of everyone’s support of the Brain Tumour Walk.”

“It’s so wonderful to be able to help all the people that have reached out to us for assistance,” Steve says. “They know that we’re providing education material, support services, and funding research to find the cure.”

“I think Kelly would be very proud with what we’ve accomplished,” adds Steve. “It’s Kelly’s legacy.”

One of the staples of the Brain Tumour Walk, and definitely the most moving part of the event, is the survivor photo, where survivors gather with their blue shirts on in celebration of their successes and in tribute to those who passed on.

“When you look out and see the field of blue you realize that they are the heroes of the organization,” Steve says. “We do it for them, but they are the ones who had to fight the good fight”.

“To think we might have had a small part in their recovery is just wonderful.”

Next year will be the 40th anniversary of the organization. The Northey’s agree that while looking back and reflecting on the successes along the way is important, it’s not the only part.  Rather, they say, keeping focused on the future is most important, walking and working towards the goal of ending brain tumours once and for all.