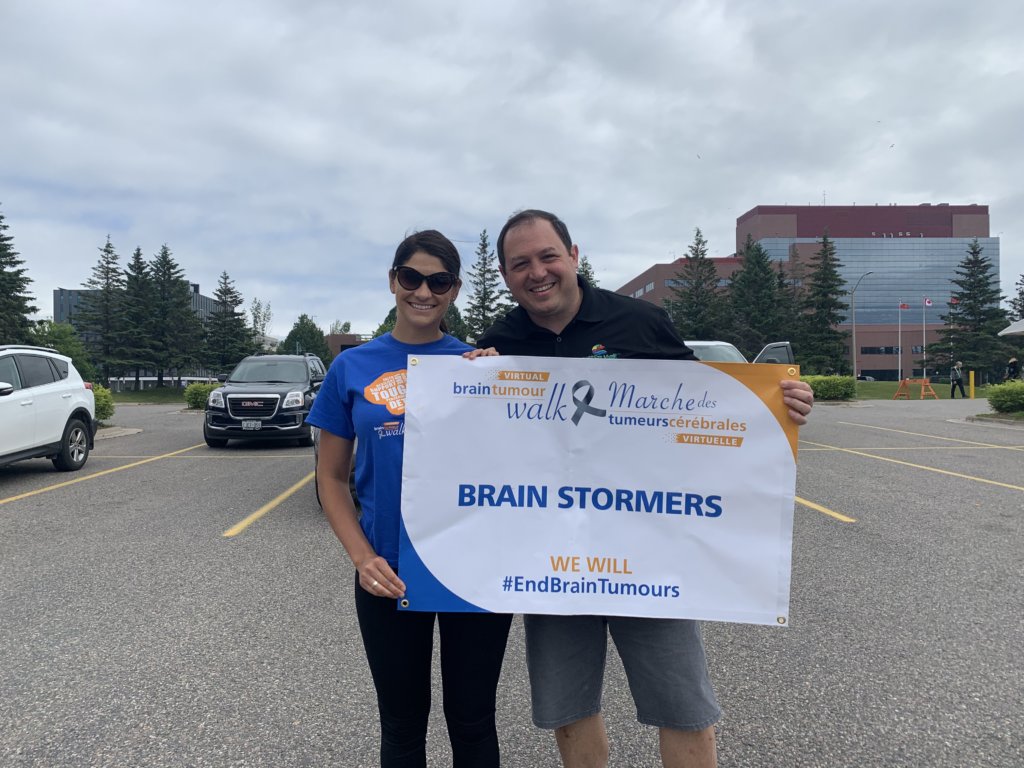 In the Sault Ste. Marie home of Kyleigh Provenzano, the coveted Cup of Hope sits high on a shelf, safely away from the hands of three curious little girls.

Provenzano led the nation in fundraising for the 2020 Virtual Brain Tumour Walk, bringing in nearly $40,000 for Brain Tumour Foundation of Canada and creating a local movement in the process.

Originally, she said she was planning a community walk event for May 27 during Brain Tumour Awareness Month. Like so many events (including Brain Tumour Foundation of Canada’s 22 in-person walks), it had to be cancelled due to COVID 19.

Not to be dissuaded, Kyleigh and co-captain Shaylan Spurway Bubinas created the #AlgomaGoesGrey campaign, which managed to thrive and unite people across the Algoma region and beyond.

The cup arrived in the mail Sept. 28, and Kyleigh opened it surrounded by her three daughters – the youngest of whom just started daycare. She said she didn’t explain what it was other than the cup was something mommy worked really hard for and was very proud of. Seeing the Cup of Hope brought on a range of emotions. 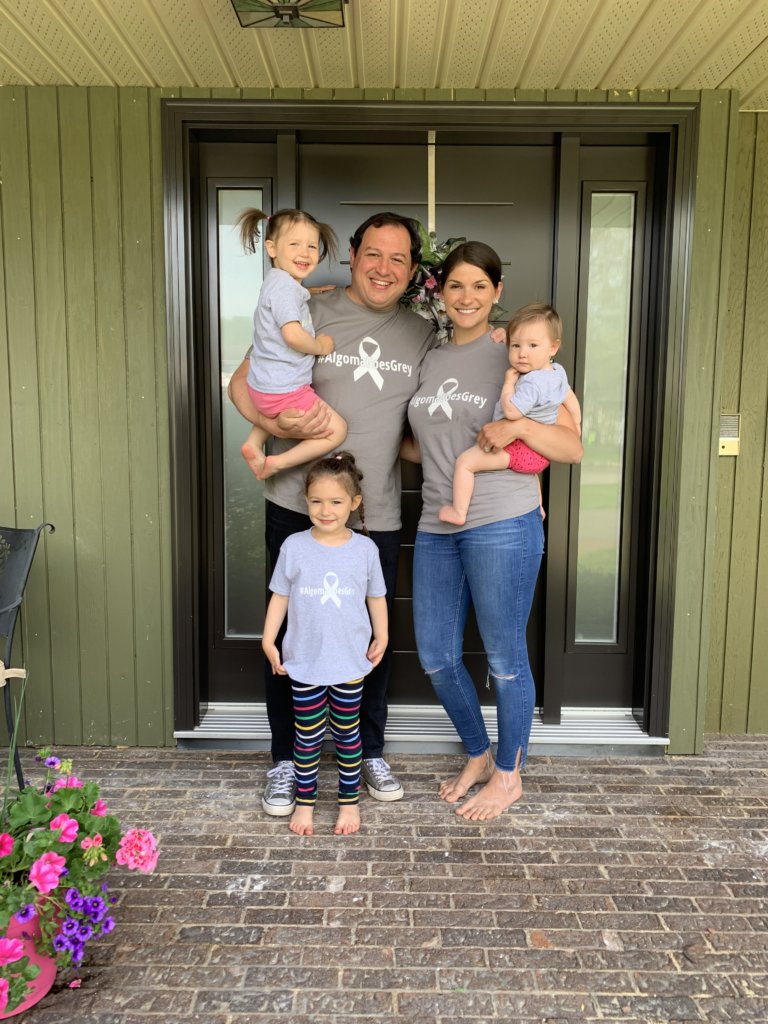 “It was a mixture of things,” she said of opening the package containing the cup. “I was excited and proud, but I also felt a little bit sad in a way. It’s something to be proud of to bring that kind of awareness but it’s a hard thing to be part of.”

Kyleigh and her team, Brain Stormers, raised a total of $39,175 for Brain Tumour Foundation of Canada, of which, Kyleigh herself raised about $34,000.

It all began with a desire to do something for the brain tumour community – though where to best place her support was the first step. Kyleigh reached out to a former soccer teammate who is entering into oncology, asking what organization would be the best fit for her fundraising efforts.

The result of that conversation led Kyleigh to Brain Tumour Foundation of Canada, and from there she went directly to the Community Events page and “just kind of followed the instructions from there.” This was the first fundraising campaign that she had ever organized, simply called #AlgomaGoesGrey.

During Brain Tumour Awareness Month in May, the entire Sault Ste Marie and Algoma region was awash in grey as Kyleigh’s campaign took on a life of its own. The campaign was to culminate with a community walk event on May 27, but COVID-19 restrictions made that impossible.

Instead, the Brain Stormers team took part in the Virtual Brain Tumour Walk on June 27 with a small group, joined by teammates from across the region, province and country.

For all the successes Kyleigh had during the month of May, it was also incredibly trying. It wasn’t just that she was in the midst of running a huge fundraising campaign with three young daughters at home. What made things so difficult was coming to terms with the seriousness of her situation.

“There was so much tumour talk,” she said. “All day, every day on the phone, in letters, on Facebook… in the community. It really kind of hit home – this is a potentially fatal disease I’m dealing with.”

So many of the stories being shared were of loss, from families who were grateful to Kyleigh for taking up the mantle of brain tumour awareness after losing their loved ones. It was both encouraging and discouraging at the same time.

May, as she puts it, was tough.

Kyleigh was originally diagnosed with a low grade glioma in October 2019. At the time her daughters were aged three, one, and four months. There were signs that something was not right, but she always attributed them to something else.

“I found with my symptoms, I could have easily brushed them off,” she said.

There were times when Kyleigh would lose her train of thought and had trouble forming sentences. These spells lasted only 30-40 seconds – something she attributed to ‘baby brain’.

“We have three children with 38 months between them,” she said. “I didn’t think about it at the time. I just thought, ‘You slept 1.5 hours last night – you just need a coffee and get on with your day.’”

Minor headaches, tripping up on her words, even coming up blank during a maid of honour speech at her friends wedding – each of these occurrences on their own were easy to ignore. Together, it meant something far more serious – a glioma located in the speech and language centre of her brain.

She’s on watch and wait for the time being, as the tumour is in too dangerous a spot to take out, with a 10-15 per cent chance of a permanent speech disability. 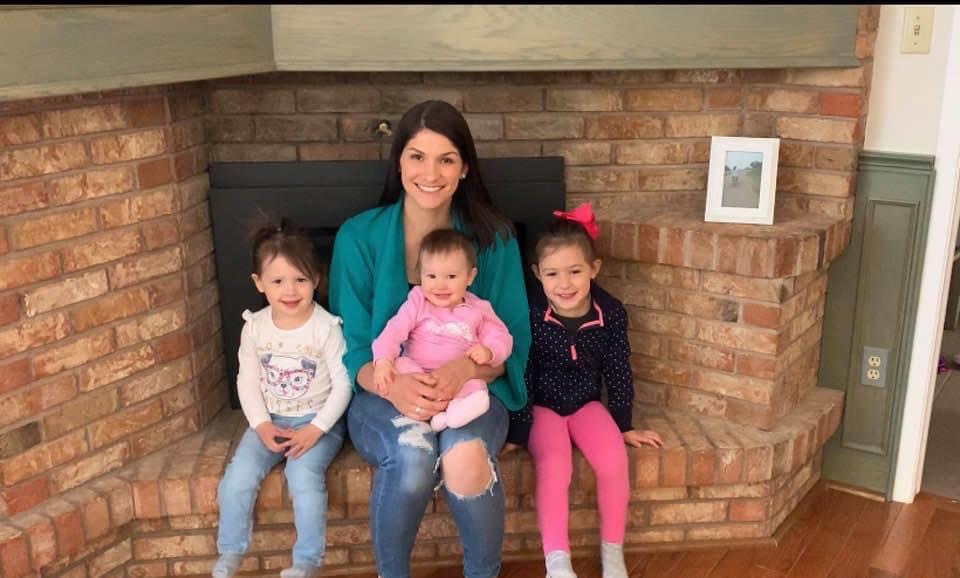 These days, Kyleigh says she is feeling pretty good. Seizures come and go, but she is managing them with medication. She’s currently not able to drive a car until she has been seizure-free for three months. Strangely enough, she says, COVID-19 has made that easier.

Suddenly, driving the kids to practices, games and recitals was no longer necessary. It was easier not to do things. In fact, she said, it felt normal.

Now that the trophy has arrived safely in the Soo, the hard part is how to make sure the team has a chance to celebrate with it. As of writing, COVID restrictions are still in place for gatherings over 10 people so Kyleigh said one idea is to have people come to take photos individually with the trophy and create a picture collage with them.

Another idea is to display the trophy in a case at City Hall where husband, Christian, occupies the mayor’s office.

“It’s challenging – usually when you celebrate things, you bring people together,” she said. Right now, though, it’s in a safe place in his home office, away from “Very curious little girls who like to get their hands on everything.”

Congratulations to Kyleigh and team Brain Stormers for their stellar fundraising efforts for the 2020 Virtual Brain Tumour Walk, and for raising so much awareness of brain tumours. Plans are already in the works for 2021, and while Kyleigh said she may not aim for the cup next year, Algoma will definitely be going grey once again.