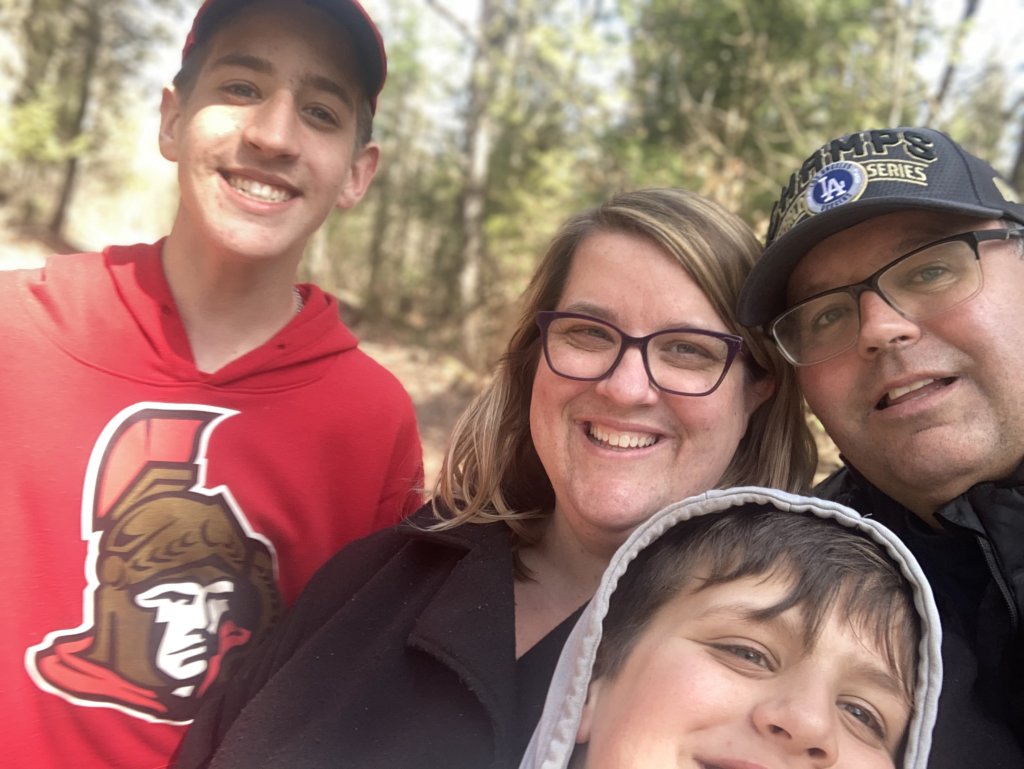 In April, 2020, Kim Stackhouse had a grand mal seizure, leading to a brain tumour diagnosis. She and her husband, Jim, shared their accounts of the events that took place, as well as the quick-thinking of their two sons, and the commendation they received. These are their accounts:

Jim and I spoke briefly about him going to get the tires changed. I remember going back to bed. I got up a short time later to downstairs.

I vaguely remember stumbling down the stairs.

From then on it’s a blur. I remember hearing the panic in Jim’s voice. He was asking me what was wrong and saying my name over and over. I stuttered the word “seizure.”

I felt like I was stuck inside my body. I vaguely remember talking to a paramedic and then after that…nothing until I woke up April 21 in the ICU at Queensway Carleton Hospital in Ottawa. I woke up to two nurses giving me a sponge bath (slightly awkward!).

I was trying to talk so the breathing tube was removed. They began explaining that I had seizures and was put into a medically-induced coma for three days to prevent swelling on my brain.

I remember asking if Jim and the boys knew I was here? They responed ‘Yes.’ The second question was “Does (my supervisor) know that I’m not coming to work? Yes she did. A battery of tests was done on me while I was in the coma to try to figure out what was going on with me.

The thought was a brain tumour, and an MRI confirmed that it was. I was told the news the next day, I think. I don’t remember much about them telling me the news. I think it was the drugs.

A plan was put into place at the Ottawa Civic. I was transferred there April 23, and met my doctor on the 26th. He was confident that it was a benign grade one Meningioma and that he could remove it all. He said I could have radiation but I was too young (43 yrs old).

I just looked at him and said I would like to have it taken out. Also he said I could go home but I would have to be with someone 24/7 as the next seizure I had could kill me. I was on seizure medication but the risks were still there.

We decided that it would be best that I stay at the Civic and wait for a surgery date – keep in mind COVID was still a new phenomenon and we didn’t know the risks. My surgery was scheduled for May 1. The tumour was successfully removed and I went home three days later.  During the week I was at the Civic, my family and friends were not allowed to visit at all.

My husband and boys Cameron (14), and Kyle (10), would wave at me from across the street on Carling Avenue. We called and FaceTimed regularly but it definitely wasn’t the same as being surrounded by loved ones.

I found out later that it was my youngest, Kyle, that recognized something was wrong with me and that he alerted his older brother who then called 911.

They saved my life – something I am so proud of them for, and so honoured that I am their mother.

On April 18, 2020, I was at a garage getting the winter tires changed when I received a call from my son saying mommy is on the floor. I left the garage and called 911.

I was told a call had already been made.

I made it home and realized the severity of the emergency. Ottawa Paramedics and Ottawa Fire arrived and soon transported Kim to the Queensway Carleton Hospital. Due to COVID, I had to be screened at the hospital.

The ER doctor told me Kim had suffered an initial seizure as well two more. She was placed into a medically-induced coma.

Prayer chains were soon set up, led by a close friend of our son Cameron’s, hockey team – Capital City Condors. My neighbours were amazing looking after the boys while I was at the hospital.

Our sister in law made some phone calls and in a few hours they had a food plan in place.

Kim woke up on April 20. The next day we were told the MRI revealed a meningioma. I got to speak with Kim that day, and she asked if the boys and I were ok.

It was difficult not being able to be there during this time.

Kim was transferred to the Ottawa Civic Hospital on April 23 and we both met with her neurosurgeon. He would perform a seven-hour surgery on May 1.

Following the surgery, I got a call to tell me it went well. They would do an MRI to verify they got all of the tumour. I spoke with the nurses in recovery, who told me Kim was resting – but in true Scottish form – making jokes.

Kim walked out of the hospital three days later with no speech therapy or OT.

Let’s hear it for the boys Our boys Cameron and Kyle are the true heroes in this story. Kyle, 10, recognized there was an emergency and woke his brother who quickly called 911.

Both boys received a commendation from Ottawa Mayor Jim Watson.

We have been truly blessed as a family with the love and support of so many people – from our family and friends, our co workers at OCAPD and Embassy West Senior Living, the Capital City Condors, and the lovely people of Knox Presbyterian Church in Vankleek Hill and St Paul’s in Hawkesburry.

In a time of crisis, the humanity of people will always be at the forefront. I will be walking 27km to the Civic Hospital and back on June 27 in honour of Kim and others, and to raise awareness for this cause.