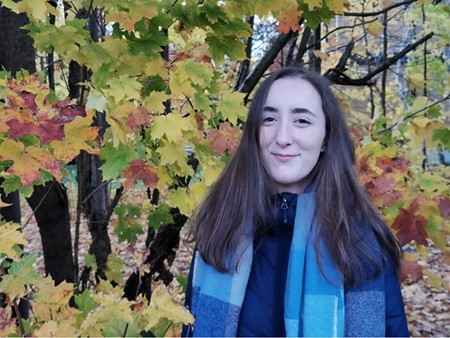 Hello, my name is Angélica. It’s been eight years since I was diagnosed with a diffuse brainstem glioma.

I was 13 when I was diagnosed. I remember several doctors gathered around me, while I lay in my hospital bed surrounded by my family. They told me it was inoperable.

I would like to share my story, because I hope it can inspire you and give you hope.

How was my tumour discovered?

I was a simple, ordinary teenager. I went to school, hung out with my friends, and took gymnastics and dance classes. I didn’t realize the symptoms were there at the time, and neither did my mom.

At school, I often fell and laughed about it with my friends. I often had non-stop hiccups and sometimes I stopped breathing and didn’t feel the need to. I had difficulty speaking, as if I had a potato in my mouth. I had hyper-salivation, difficulty swallowing, and double vision in my left eye.

Worst of all were the headaches, dizziness, and heartache. When I lifted my head up, especially too quickly, it hurt a lot. My brain was going boom-boom like a heartbeat. It gave me such a headache and made me vomit all the time.

It was one summer evening in July 2013 that everything unfolded at breakneck speed. In the morning, I woke up with a big headache and nausea. I stayed in bed most of the day. My mom would come to see me every now and then to see how I was, but I was sleeping.

That evening is very vague in my memory, because if I hadn’t gone to the hospital that night, I would probably have died. I remember lying on my stomach, trying to lift my little finger, but it felt as if it was held down by all the weight in the world. I was trying to call my mom, but my voice was so weak she couldn’t hear me.

I don’t quite know around what time in the evening my mother came to me and said, “Angé, what’s going on? You stayed in bed all day, you didn’t even get up.”

It was as if her voice had given me new life and I regained consciousness. She helped me up, as I didn’t have the strength. I crawled into the bathroom and kept throwing up. She called the ambulance and I was rushed to hospital, where I underwent several tests.

A few days later, I was told that I had a diffuse brainstem glioma and that it was inoperable. Wow, bad shock. Who in their life can ever think of having cancer, and especially when you are 13 years old?

The night I got back to the hospital, I felt paralyzed. My pinky felt so heavy, because somewhere in my brain there was a connection going wrong. The severe headaches and “boom boom” I was experiencing along with heart aches and dizziness were due to too much pressure in my brain. I almost ran out of space for the cerebrospinal fluid.

Diffuse brainstem glioma affects the central nervous system of the brain, which is why many functions were, so to speak, obsolete. I started medication and radiation therapy soon after. For this kind of tumor, chemotherapy is not known to be effective because, among other things, the blood does not get to this part of the brain. The medicine that worked the most for me was Dexamethasone. It probably saved my life, reducing the swelling and my symptoms quite a bit.

However, psychologically and even physically, it had a huge impact. I weighed 110lbs and climbed to 150lbs from the water retention the medication causes. I was unrecognizable. For me, it was very difficult, because when you are a teenager your appearance and your self-confidence matter a lot.

Radiation therapy worked, too. I got up every morning at 5am for my treatments. However, I was very well-supported by my family and the hospital staff. It was all of their encouragement and support that helped me too.

Return to school and to normal life

As for school, I had my Secondary 3 lessons at home. The effects of radiation therapy were causing me great fatigue, and the water retention caused by the Dex was still far too present for me to want to be seen in broad daylight. I was afraid of the eyes of other teens in my high school.

I wanted to continue my life, continue my success and my journey, but I was not yet ready to face the questions and comments of others. I didn’t want to be plunged back into it. In Secondary 4, I went back to school – I had to face it head-on. It was hard because not everyone is able to “deal” with the situation.

A lot of times people avoided me and didn’t dare look at me. I heard comments like, “Ah, she’s the girl who got cancer.”

Surely there must have been people who found me strong to carry on despite the illness, but at that age I didn’t have the insight I do at age 20. I sometimes had straight passes from the teachers and not everyone liked it. There were jealous people. I was bullied because of it. You may wonder – just as I did – how can you bully a person who has cancer? These are questions, that required much reflection to answer. Still, the intimidation did not stop me from continuing. I had been fighting for my future and my life for almost two years now, and these people were not going stop me.

I am lucky that my tumour did not affect the cognitive functions of my brain, so I continued to do well in school. In Secondary 5, it was happier. I was no longer alone because I had made a friend. I graduated and entered Cégep.

Life had more-or-less returned to its normal course. I still had follow-up appointments, but I put the disease aside for a good five or six years. I continued, with certain consequences, to live like a normal person, but with additional baggage and experience.

In July 2019, exactly six years after my first admission to hospital, I had a relapse. I was starting to have symptoms again, but much less intense. I had headaches and dizziness again. My left eye double vision followed me for six years, but it was getting worse.

Part of the tumour had spread into a small part of the cerebellum. On the right side of my body, I had less control, less strength and less feeling. It was like a lack of connection and my body didn’t want to do what I ask of it.

I had occupational therapy and physiotherapy to “revive” these connections. Even today, I have to work on this. For example, at the start of last summer, I wasn’t able to run at all. It was hard and I was dealing with a crooked foot, but there is progress.

The progress will not stop, I’m sure.

The relapse brought me back into this thing I never wanted to return to. This time, however, I knew what to expect, though at the same time I didn’t know. The mentality of a 13-year old child and that of a 19-year old young adult are different, but you can’t help but wonder when your life is in danger – Will I die this time?

When I started college, I had 2-3 radiation treatments left to do. I would go to my treatment at 11am and then attend my classes.

I’m pretty proud of myself and how far I’ve come.

Today I feel able to share my experience with others, which at the start of my illness was very difficult for me. My illness has brought me a lot of bad, but it has also brought me so much good. I wouldn’t be who I am today if I hadn’t had all the experiences I have had, met the people I met, or learned the things I learned.

As much as I would like her (my tumour), not to be there, she has given me a lot. I learned to live with it and I’m still learning – among other things – to let go and enjoy life.

The positivism that I have had since 2013, I think has been a big part of my survival. I always believed I was going to survive and I’ve been here for almost eight years. My tumour is inoperable and therefore, still there. She’s with me. She reminds me of who I am and what I’ve been through. I still hope that she will still be quiet and not put on weight for several more years.

I am now at university, studying psychology. I hope I can achieve my goal of becoming a psychologist. I have adopted as a motto “nothing happens for nothing in life.”

From any experience, you can come out with something positive and learn from it. As they say, what doesn’t kill us makes us stronger and it is true.