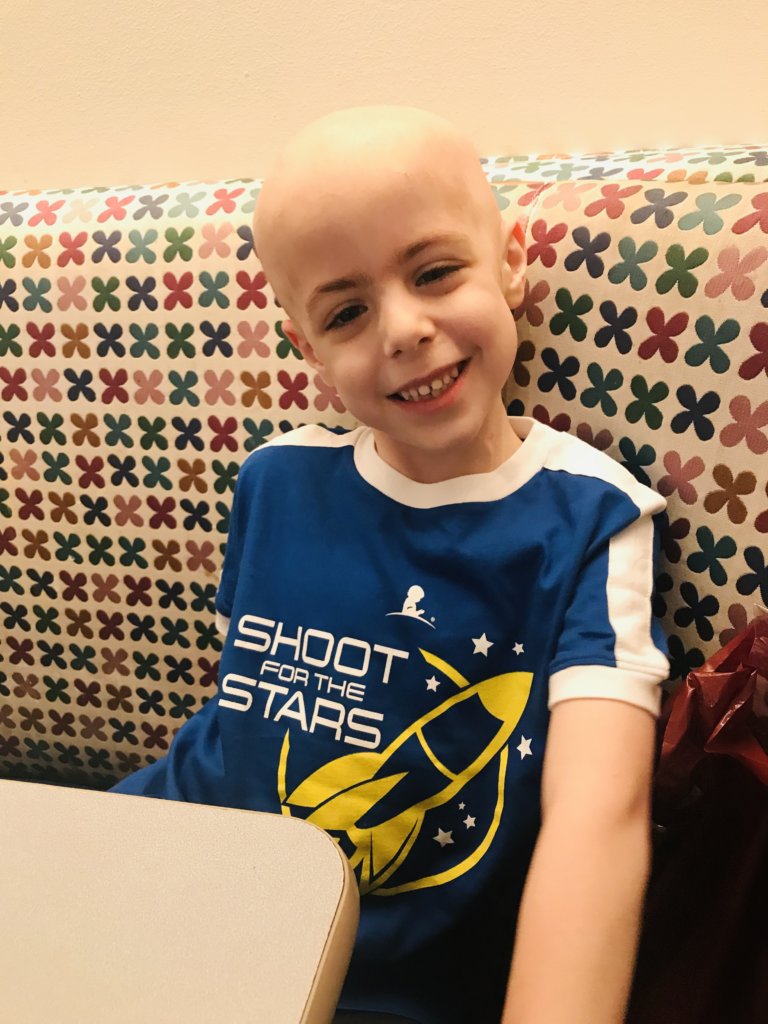 January 25, 2021, was a big day for eight-year old Ethan Hayes and his mom Cindi Shoot.

Following a scan the previous day, they received word that his cancer was gone – nearly two years to the day from his original diagnosis and one year after his last treatment.

The original plan was to hold a big celebration to commemorate the one-year anniversary of the end of Ethan’s treatment. However, like most aspects of daily life during the pandemic, that got put on hold.

Ethan was diagnosed with a medulloblastoma, sub-type 3, that had traveled from his brain to his spine. He underwent four surgeries, endured several complications, and traveled to the United States for experimental treatment prior to the welcome news. “He’s… been through some stuff,” mom Cindi says. After his surgery, Ethan was unable to walk for five weeks. His side effects included one hand that wouldn’t stop moving. This was in addition to an MRSA infection following surgery, which meant he wasn’t able to take part in many of the activities with the other children at SickKids.

He took it very well, and Cindi says she made sure to protect her son’s mental health. Even in the face of what could easily be a disheartening setback, Ethan handled it like a champ.

“He’s the most chill kid,” Cindi says. “I think Ethan has taught me resilience.”

It’s every parent’s worst fear to learn their child has cancer, but Cindi was determined not to let that fear overcome her.

Following Ethan’s diagnosis, she says she had a choice to make – stay positive and fight or give in to fear and isolation. Cindi chose the former, being prepared for whatever may come but facing it with positivity and an open mind.

Thankfully, Ethan was accepted for a clinical trial in the United States – something Cindi credits for her son’s recovery.

The clinical trial was a lifesaver in the truest sense.

Now when he gets needles and IVs, he practices deep breathing to relax. And, Cindi says, he’s had so many COVID tests at this point he handles them like a pro.

He is currently in physio and occupational therapy and making gains every time. It’s not an overnight process, but every gain is a cause for celebration.

During his stay at St. Jude’s in Tennessee, Ethan made some great friends, and still keeps in touch. Once a week Ethan meets up with a buddy online for a game of Super Smash Bros. While he looks like just a regular, happy kid, Ethan has acquired a sense of calm and wisdom that are beyond his years. His natural ‘chill’ not only helped Ethan get through his treatment and recovery, it’s also a calming influence for Cindi.

She recalled one day in particular when Ethan came to her and said, “Mom, you know I don’t have cancer anymore, I’m okay.”

“He’s very in tune with himself,” Cindi says. “He’s only eight, but he knows.”

Now, Cindi is determined to give back to the community that supported them and raise awareness of brain tumours in the hopes of getting better treatment for kids in Canada. It’s not just limited to cancer, she says. The stresses of malignant and non-malignant tumours are the same, as is the lack of knowledge and options.

“People need to be aware this is happening,” Cindi says.

Brain tumours – specifically pediatric brain tumours – are considered rare and often don’t get the attention that other diseases do. However, once you are thrust into that world, it’s hard to believe childhood tumours and childhood cancer are anything but common.

“People say it’s really rare,” she says. “I don’t feel that it’s so rare when you’re surrounded by it.”

For any parent who suddenly finds themselves a cancer mom or dad, Cindi says it is important to take care of yourself. Talk to people, whether they be support staff or people outside the medical bubble. It is tough, but there is light.

“You have to walk through fire, but you’ll get there,” she says.

Ethan gets scans every three months now to make sure he is cancer-free.

Meanwhile, the family lives in the present and celebrates what they have rather than worry about the future.

The January 25 news is the beginning of a new chapter for Ethan and family, and only the latest in a string of celebrations.

“What happens next is we’re just going to live our life happily,” Cindi says. “We’re going to celebrate five years and then ten years.