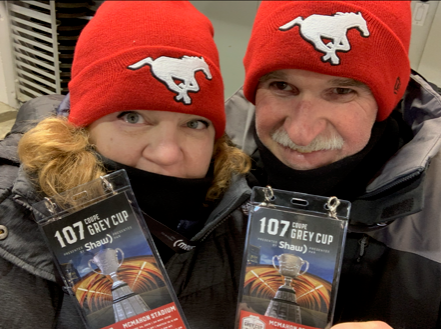 Twenty years ago this June, with her husband by her side, Lori Wilson was informed that she had a large brain tumour which needed to be removed.

“That was not the true start of our journey, and I say ‘our’ because this diagnosis affects not only the individual, but their family as well,” states Lori, whose family’s journey began in 1975. Her father was diagnosed with a non-malignant brain tumour, and sadly died at the age of 42. Lori was only 10 at the time.

“Many years passed, and I began to feel unwell. I had many symptoms; most we seemed to find a reasonable explanation for,” she remembers.

However, there were too many other signs that could not be explained away, such as intense headaches, a constant in her daily life.

“On a scale of 10, they were well above a 10. I compare them to the brain freeze you get when you drink a slushie too quickly,” Lori expresses.

After several years of ongoing worsening symptoms, intense headaches, and being told it was simply a migraine, Lori finally had a CT scan. At that appointment, Lori was diagnosed with two brain tumours. She traveled via ambulance to meet her neurosurgeon at another hospital. She had surgery the next morning to remove the large, 7-cm mass.

“The plan was to address the larger one first and deal with the other smaller one a few months later. My tumours are non-malignant meningiomas, although non-malignant tours come with issues as well. Let us not discriminate based on malignant or non-malignant,” says Lori.

Things changed when six months after her surgery, her stepfather was diagnosed with a malignant tumour, sadly losing the battle only three months after.

Two years after Lori’s first surgery, she scheduled her second. At that time, she was between her first and second year of university for her nursing degree.

“Things went well, and our life continued on. Then, at 14 years post diagnosis, my regular follow up MRI showed seven new growths so far. Another blow to the family when my brother-in-law was diagnosed with a non-malignant tumour six years ago,” she recalls.

Lori has regular MRI follow ups. She and her family will continue to watch the growths, and any new ones should they happen. Because her initial diagnosis found two brain tumours, there is an increased likelihood of multiple tumours occurring and recurring.

“Should we be faced with more surgery, we will deal with it then. For now, we remain positive and try to live with what I have always called our ‘new normal’,” she says.

As the convenor for her local support group, Lori enjoys giving back to the community.

“We have been involved with the Brain Tumour Walk for many years and have had the pleasure of meeting some amazing people along the way!” she exclaims.

“Together with my husband and family, we imagine a cure one day, so no one ever has to hear those words we have heard too many times.”