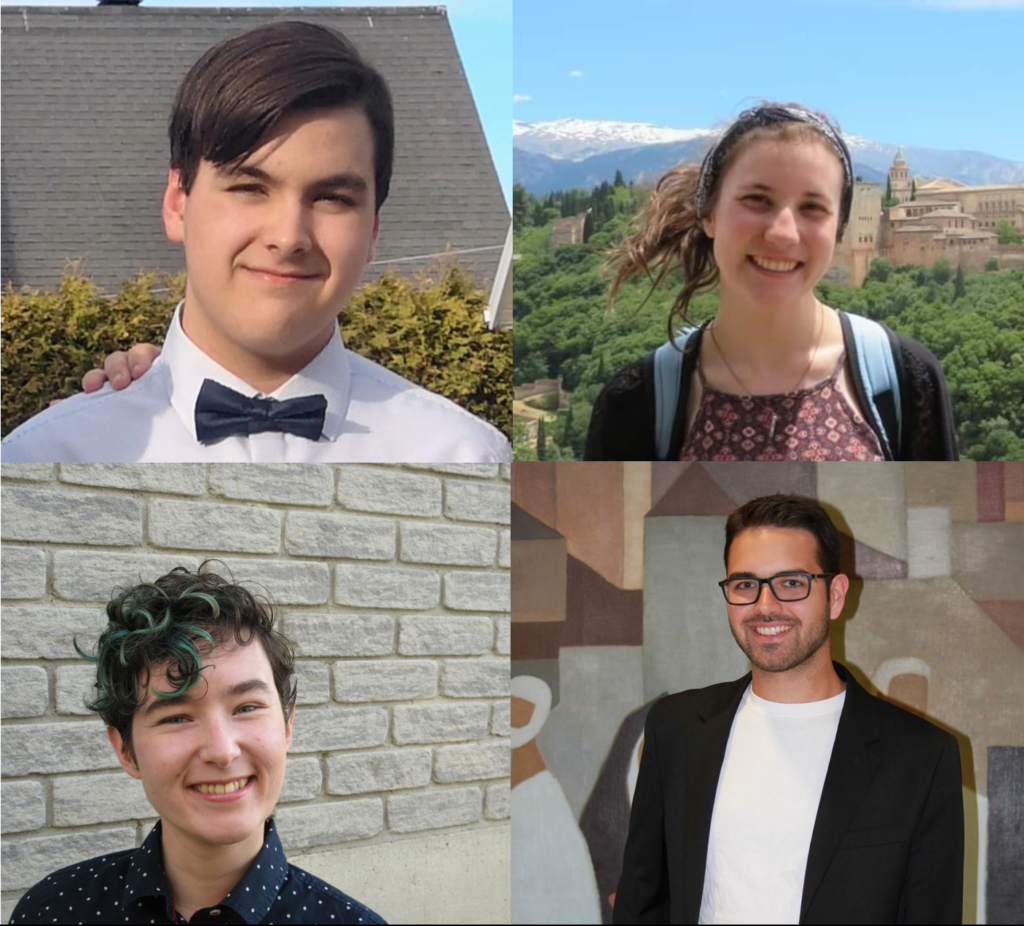 Each year, the Pam and Rolando Del Maestro Undergraduate Student Research Competition reinforces why we do what we do.

To see bright young minds thinking in new ways about brain tumours, and developing a passion for research, gives hope to all of us about the future of brain tumour treatment and quality of life.

We sent each winning team a series of questions to learn why they chose to compete, what got them interested in brain tumour research, and what challenges they faced with working from a distance.

The winning team of this year’s competition is Dominic Bélanger, Sabrina Juhasz, Maxime Kusik, and Naomie Linteau of Laval University in Quebec City.

Q: How did you first learn of Brain Tumour Foundation of Canada, and what inspired you to enter the competition?

DOMINIC: We first learned about the Brain Tumour Foundation when our program director Darren Richard shared the event invitation with all the students in our program. Since some group members know people who have suffered this disease, the invitation struck a chord. The invitation was quickly forwarded to two other students who were interested in neurosciences. Everyone immediately understood the value of such an exercise and we swiftly got to work.

Q: What inspired the group to take on this particular project?

Our project was inspired by our own internships during the summer. Indeed, we were looking for a way to transfect specific neurons using viral gene therapy. Thus, we thought that this concept could be applied for cancer therapy, as we knew that it was possible to transfect a selected gene in targeted cells using a viral vector. Our research in the litterature confirmed that it was possible, so we looked for a specific protein which would have the ability to impede tumor progression of this specific cancer. Collectively, these findings allowed us to build our project for this competition.

Q: How did it feel to know you were one of the winning teams

We were astonished at first, as this is something we felt only happens to other people. We were already proud of the project that we presented notwithstanding the final result; winning the competition was the cherry on top of an already amazing sundae.
While the initial elation has faded and we have moved on with our daily lives, this honor motivates all of us to keep participating in research projects and eventually, become researchers.

Q: Was it difficult to work as a group during the pandemic?

As we knew that communication would be a key factor to being successful in this competition, we wanted to establish efficient communication amongst ourselves. Not only were we able to communicate well throughout the completion of this project, it was also an opportunity for us to keep in touch with each other as good friends. Technology helped us to practice together and work on the details throughout the project as well as to look after each other to make sure that everyone is doing well in these unprecedented times.

Q: What are your plans moving forward in your academic careers?

Maxime will pursue his studies in neurosciences, as he will gather further knowledge on multiple sclerosis during his master degree. He ultimately wants to become a researcher and professor in the domain of immunology and neurosciences.

Dominic also wants to continue his studies in neurosciences. He is interested in spinal cord injury and cancer and wants to proceed in one of these fields.

Naomie will pursue her studies in research, with a specific interest in the fields of neurosciences and molecular biology. She is open to see what the future holds for her career path.

Sabrina aims to become a researcher in cognitive neurosciences and hopes to study mental illnesses, neurodiversity, and processes related to happiness.

The team of Peter Liu and Chelsey Zhao were one of two teams from Western University in London, Ontario to place in the top three. Their research presentation, “Potential antisense oligonucleotide inhibitor treatment for midline diffuse glioma”, earned them second prize and $750.

Q: How did you first learn of Brain Tumour Foundation of Canada, and what inspired you to enter the competition?

PETER: We learned about the Brain Tumour Foundation and competition from Dr. Zhang, and thought it was a good opportunity to get a taste for research and practice presentation skills.

Q: What inspired the group to take on this particular project?

After we read the case study, we were initially interested in the genetic abnormalities of diffuse midline glioma H3K27M mutated. Dr. Zhang recommended we examine non-coding RNAs as they could be delivered and detected in cerebrospinal fluid using a non-invasive procedure. We started investigating relevant ncRNAs associated with H3K27M and began building our experimental design once we had a few candidates.

Q: How did it feel to know you were one of the winning teams?

We are very grateful to be one of the winning teams. It is wonderful to be recognized for our effort and thinking. We greatly appreciate organizations like the Brain Tumour Foundation and the Del Maestro family who support student research and exploration by hosting events such as these.

Q: Was it difficult to work as a group during the pandemic?

It was difficult in that communication had to be done online. However, due to the online format for school, we were both home all the time which made meeting times easy to organize!

Q: What are your plans moving forward in your academic careers?

Like many undergraduate students we are unsure. However, working and gaining experience with Dr. Zhang’s Lab has sparked an interest in science for both of us, and we hope to continue work on research projects during our undergraduate, and perhaps pursue graduate school in the future.

Q: How did you first learn of the Brain Tumour Foundation of Canada, and what inspired you to enter the competition?
SHREYA: In 2004, my mother was diagnosed with subependymoma – a rare benign ependymal tumour. After countless surgeries, months of rehab, and years of physical therapy, she was out of danger; however, her life would never be the same. In support of my mom, I joined the Brain Tumour Foundation of Canada in 2016. Since then, I have helped coordinate yearly Brain Tumour Walk events, co-founded a youth brain tumour awareness campaign, and joined the organization’s SuperKids committee. I truly believe that with all of the scientific advancements that have been made thus far in research, the newest generation has the power to propose therapeutic interventions for previously inoperable brain tumours. It was with this knowledge in mind that I entered the competition – acknowledging that I would compete alongside like-minded neuroscience enthusiasts who strive to have the same impact on the brain tumour research community as I do.

Q: What inspired the group to take on this particular project?
Pediatric brain tumour research has always been very close to my heart. As the daughter of a brain tumour survivor, I can understand the helplessness that parents may feel during a diagnosis, as well as the implications that surgery can have on an individual’s quality of life. It is for this reason that I work with the Ontario Provincial Youth Cabinet to facilitate more accessible education plans for pediatric brain tumour survivors. Consequently, when I read the case-study for this year’s competition, I knew immediately that I was interested in providing my own unique perspective on a potential therapeutic intervention. In our case, we proposed K-M enhancer region deletion for the regulation of Temozolomide sensitivity because it is a rather pain-free process that impairs rapid cell proliferation in diffuse midline glioma.

Q: How did it feel to know you were one of the winning teams?
It felt surreal when we were announced as one of the winning teams. The week leading up to the competition consisted of an endless number of essays, midterms, and assessments. My partner and I met virtually between midnight and 2:30 AM every morning to prepare and practice our presentations. It was an incredibly tough week for both of us, but we did not give up! Nonetheless, as amazing as it felt to win, we were more so in awe of everyone’s proposals and felt incredibly privileged to compete alongside such bright and successful individuals.

Q: Was it difficult to work as a group during the pandemic?
The pandemic definitely posed its challenges in the preparation process for this
competition. Maisha currently works in a Residence Building on Western’s campus, and I am back home in Brampton, Ontario. Given the nature of our conflicting academic schedules, Maisha and I relied on late-night Zoom calls to prepare the PowerPoint presentation. Unlike in-person competitions where Maisha and I would normally sit in round-table discussions with expert researchers to gain alternative perspectives, the pandemic subjected us to long email chains that were often prone to misinterpretation. This usually hindered our long-term goals because we were unable to establish clear performance metrics and strong communication lines.
Although it required some adjusting and flexibility, in the end, we were both extremely proud of our final product and knew that we had learned many new skills along the way.

Q: What are your plans moving forward in your academic careers?
When my mom was diagnosed with subependymoma in 2004 – a rare benign brain tumour – I realized first-hand how fragile life could be. I remember my family putting all their trust and faith into the neurosurgeon that had saved my mom’s life. It was at that moment in time that I knew I wanted to be that same pillar of support for other families in similar situations.

It is for these reasons that I hope to pursue neurosurgery in the near future. Currently, I am pursuing an Honors Specialization in Neuroscience at the University of Western Ontario. I am also a member of the Ontario Provincial Youth Cabinet, working with the Health and Education Ministries to help facilitate more accessible education plans for pediatric brain tumour survivors.
However, I intend to continue contributing to the brain tumour research community in any way possible, acknowledging that they have set the foundation for a vast number of the advancements that have been made in early detection and diagnosis. Currently, I am volunteering at the Culham Lab in the Brain and Mind Institute, and as a Research Lead at Nexus Laboratories. I am also the current Co-President of the Western Undergraduate Neuroscience Society.