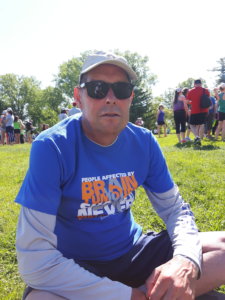 As an award-winning renovations general contractor, Michael J. Martin’s well-respected business was thriving in our Nation’s Capital. Mike was also a well-liked hockey Coach for minor league and also coached his wife’s ladies team. He was an energetic 240 pounds, very warm-hearted man filled with pride and as generous as they come.

On-going childhood migraines were typical and often became cluster headaches after taking over-the-counter pain medications. He knew how to deal with these. In the summer of 2016, we noticed Mike becoming a bit impatient and even irrational. His behaviour, while out of the ordinary, in hindsight, who knew what was about to unfold?

Over the next 11 months three negative CT head scans, lead to several misdiagnoses – from anxiety burnout to allergies, to pneumonia, to vertigo, and depression – his physical, mental, and emotional health was declining. He was becoming more and more lethargic, reduced appetite, and losing passion of working. It became apparent he was becoming forgetful and quieter; his health was rapidly declining. His family doctor had retired, and it took four months to find a new doctor. On August 17, 2017, we were finally able to convince him to see a family physician, who then requested that we take him to emergency immediately. At that point, he had already lost 40 pounds and was unable to walk without assistance.

The emergency CT scan showed a mass in three lobes. It was determined to be: Primary CNS diffuse large B cell lymphoma.

Mike received chemo treatments, one week as an in-patient then one week out-patient. But, partway through the protocol, an MRI determined that a second spot was found, growing fast even during the chemo! Without treatment, they said he might have two months to live. The second option, although very risky, was whole brain radiation treatment. This would give him 12 to 16 months longer, with a possibility of five years or more. He chose radiation and thankfully, with his stubborn will, he managed to make it through three years longer. The treatment resulted in him unable to work, but he was able to regain some independence at home and take on minor chores!

Over the next three years, Mike participated in two Brain Tumour Foundation of Canada 2 km Brain Tumour Walk events and attended monthly support group meetings at Maplesoft Centre, also organized by Brain Tumour Foundation of Canada. He enjoyed learning from guest speakers. In addition to making new friends, they shared their day-to-day challenges of dealing with brain cancer which was extremely helpful. Although due to Covid, these meetings ended in March 2020. Even though the meetings resumed virtually, it was truly being able to meet in person, with a destination, that was incredibly important. It gave him a purpose.

In October 2020, during a follow-up clinic appointment via telephone with our oncologist, he was advised that he was in remission, finally. However, over the next two months, his health once again declined, this time even more rapidly.

Then New Year’s Day, 2021, he fell off the side steps at home and was taken to emergency. The trauma unit treated the four broken ribs and punctured lung. After six weeks, the reason for the fall was being investigated and in mid-February an MRI was ordered. That’s when we found out that the primary CNS lymphoma was recurring in the cerebellum, affecting his coordination and appetite.

In March five radiation treatments were administered. We were told that he might have a few weeks or a couple of months, as the radiation was only to prolong his life, it was not a cure. He hadn’t been eating well since November, his body was depleting, his weight dropped to 132 pounds. After three months in hospital, he was bedridden and declared a two-person assist.

No longer being a treatable oncology patient, he had the option of being transferred to a nursing home facility. Of course, with Covid, we wouldn’t be able to visit with him. With only a few days’ notice, we converted the master bedroom into a hospital room. He came home on April 6, 2021. Due to Covid, there were no personal support workers available to us for that first week. We were able to retain a private nurse who graciously taught us how to care for his basic needs.

Mike really wanted to be home to pass peacefully, with us by his side, he did so on April 26, 2021. We are comforted in knowing that he is no longer suffering.

Cherish the moments with your loved ones. It is what it is!