Branavan Manoranjan is a Medicine and Biochemistry/Biomedical Sciences student at McMaster University. With his 2013-2014 research studentship he worked with Dr. Sheila K. Singh on a project looking at the self-renewing cells in brain tumours.

This studentship was funded through the generosity of the Cayouette family

Medulloblastoma (MB) is the most common type of malignant brain tumour in children, and is thought to arise from an abnormal stem cell. Recent research has categorized MB into four subgroups, only one of which is consistently associated with good patient outcome. This good-outcome subgroup is characterized by the involvement of Wnt proteins, which are present in stem cells and usually mark aggressive cancers.

We hypothesize that Wnt activation in stem cells from aggressive MB subgroups will reduce tumour growth. We will program MB stem cells to overactivate Wnt proteins, and measure these effects on tumour formation in our mouse model of brain cancer. We hope to discover the potential beneficial role of Wnt proteins in controlling MB growth through mitigation of specific stem cell properties allowing for the development of new targeted therapies for children with MBs characterized by relapse and poor overall survival.

Over the course of two summer terms, Branavan will perform functional experiments to assess the presence of brain tumour-initiating cells (BTICs) such as self-renewal, proliferation and differentiation; lentiviral work for generating MB BTIC lines that have been genetically manipulated to conditionally express genes involved in Wnt signaling; and gain-of-function and loss-of-function experiments to determine the effect of Wnt signalling on MB tumorigenesis 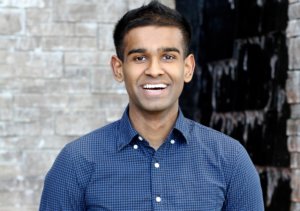 For 24-year-old Branavan Manoranjan, working with the human brain has been a dream since childhood. What began as a youthful wish has now grown into a career goal of being both a doctor and a researcher. “I always found the brain to be so fascinating,” explains the McMaster University MD/PhD student. “Even in elementary school, I wanted to be a neurosurgeon.”

Branavan is one of the first recipients of a Brain Tumour Research Studentship, a funding opportunity that allows him to take two summer terms in his mentor’s lab to study medulloblastoma, the most common malignant pediatric brain tumour. Describing his work, the enthusiasm and excitement Branavan has for brain tumour research is clear. “In the end, I’m happy to ask the crazy and absurd questions! I think the best scientists and most amazing discoveries are the result of people asking strange questions. That’s how I go about my research,” he adds laughing.

Branavan’s long-time interest in the human brain piqued in Grade 9 when he did a volunteer placement at a local Alzheimer’s facility: “I was absolutely intrigued. I’d have the same conversations with residents week after week. To know they couldn’t remember me or any of our talks – that motivated me to understand how the brain works.” From there, Branavan sought a high school co-op placement with one of the country’s leading research scientists/neurosurgeons, Dr. Michael Cusimano. Spending several months at Dr. Cusimano’s lab opened Branavan’s eyes to the world of brain tumour research. It’s there Branavan also met his current mentor and supervisor, Dr. Sheila Singh.

Today, Branavan’s research looks at a specific mechanism in the stem cells of one of the four medulloblastoma subgroups. It’s a mechanism that, if Branavan is proven correct, could change the course of the disease for all types of medulloblastoma. “We need to find a way for kids with medulloblastoma to live better lives. After radiation and chemo, you see just how damaging these standard treatments can be. Post-secondary school can be out of the question, and sometimes the kids end up staying with their parents indefinitely. Where is their quality of life?” he questions.

Though he admits his project is a bit “out there,” initial findings suggest that Branavan’s original idea could be on the right track and, in the future, may reduce the need for aggressive chemotherapy and radiation. “If we can figure out that one mechanism that gives my subgroup a better outcome, maybe we can activate it in the three other subgroups’ stem cells too. It could lead the way to fewer treatments and much better quality of life for all medulloblastoma patients.”

As Branavan looks to his second summer term with Dr. Singh, when he will complete his research studentship, he’s optimistic about the future of not only his work, but that of the entire brain tumour research community. “I’ve learned so much in Dr. Singh’s lab. I appreciate the sense of collaboration and that I can explore findings that aren’t necessarily brain tumour-related. I believe that if we look at different cancer systems or models and pose questions but in the context of brain tumours, we will find the answers we’re looking for.”

Our results provide preliminary hope for novel strategies towards the treatment of medulloblastoma (MB). Proposed experiments for the remainder of my school year include repeating the in vitro experiments in surgically-resected primary patient samples and to translate my in vitro research findings into an in vivo mouse model by performing intracranial injections of Wnt-activated and control MB stem cells. The outcome of this experiment is expected to yield data on the role of activated Wnt signaling in improving survival and reducing MB tumour burden. Our long-term research interests will be to characterize MB BTICs generated from recent Group 3 MB mouse models. In collaboration with Dr. Robert Wechsler-Reya, we will co-transduce our inducible Wnt-activating and reporter construct with the characteristic Group 3 Myc-driven construct. In treating mice with doxycycline, we will assess our capacity to reduce tumour growth and prolong survival in mice at different dosages of activated Wnt signaling. We will further study the effects of treating Group 3 MB mouse models with small-molecule GSK3 inhibitors to asses the clinical utility and off-target effects of activating Wnt signaling in a pre-clinical model of Group 3 MB. These experiments will most definitely provide us with a comprehensive understanding of the protective nature of the Wnt pathway within the context of MB. Our hope is to demonstrate novel context-specific roles for Wnt signaling and more importantly, identify novel strategies for treating Group 3 and 4 poor-outcome pediatric medulloblastoma.

The Brain Tumour Foundation of Canada summer studentship provided me with the unique opportunity of conducting cutting-edge brain tumour research under the mentorship of Dr. Sheila Singh, while also having the privilege of interacting with patients and their loved ones through events supported by the McMaster Children’s Hospital. These memorable experiences served as a strong motivator for my summer research since I was able to reflect on the importance and value of my work whenever there was an unexpected hurdle to overcome. In terms of my exposure to pediatric oncology, my summer research term allowed me to appreciate the difficulties associated with conducting research in pediatric brain tumours as these tumours are rare in the general public, which may limit the number of primary samples that can be collected during the course of a 2-month research term. To further complicate the work we do, not all samples are proliferative, consisting of healthy cells, which may limit the number of experiments and replicates that can be performed on a given sample. Nevertheless, I was able to develop several new practical research skills in molecular biology. These include: molecular cloning, immunoprecipitation, and chromatin immunoprecipitation.  On a more conceptual and theoretical front, I developed greater insight into the dynamic nature of signaling pathways and their role in cancer. For example, the Wnt pathway has long been considered as a promoter of tumorigenesis and indicator of poor prognosis. However, my summer research term has indicated that this notion is truly context-dependent and is not the case in all types of cancer. Therefore, the idea of a constantly evolving pathway with different roles and functions depending on the stage of tumour progression and type of tumour may be considered by some to further complicate our understanding of cancer, but such ideas may also trigger novel avenues for targeted therapy if these pathways can be leveraged at a point during benign tumour growth.

The opportunity to work with Dr. Singh in the clinic and operating room and then to “cross the bridge” by her side to the research laboratory and ask the pertinent questions that were triggered from our clinical encounters has been a priceless and truly motivating experience. Words cannot express the gratitude that I have for programs such as the Brain Tumour Foundation of Canada summer studentship in making such memorable and impactful experiences a reality. Lastly, my summer research has further solidified my desire to merge my research interest in neuro-oncology with a clinical career in neurosurgery focused on surgical neuro-oncology such that I may translate the observations made in the clinic and operating room based on a patient’s clinical features and tumour location/size to the laboratory where I may investigate the biology of these tumours and apply these findings to those same patients seen in clinic or the operating room.