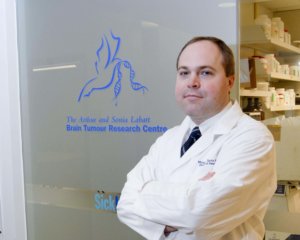 Cancer is the leading cause of non-accidental death in Canadian children, and brain tumours (medulloblastoma) are the leading cause of pediatric cancer deaths. Those children who do manage to survive usually have a severely impaired quality of life due to the aggressive treatment of the disease. Thus, innovative strategies are needed to improve the quality of life for families of children with brain tumours and increase survival rates.

Development of more effective therapies specially targeting tumor cells or risk-adapted treatment strategies require a profound understanding of the biology driving brain tumour development. Several studies analyzing the tumour genome have yielded important biological insights over the past decade. However, these studies automatically assume that single biopsies are representative of the entire tumour.

The proposed study will determine the degree of intratumor heterogeneity in pediatric brain tumours across the entire (epi-) genome in multiple regions of the same tumor. Our results will indicate if biological signatures are geographically stable and how representative single biopsies are of the entire tumour.

Solid cancers, such as brain tumours, vary considerably throughout the tumour mass, this variation makes it very hard for doctors to identify specific targets within a given patient’s tumour that could be used to develop patient specific treatments. During our project we analysed several different parts of each tumour that we had isolated from 35 different patients. We then used a series of genetic tests and data analysis to determine what differences occur at various points within a given tumour. We found that for Medulloblastoma the potential targets for therapy varied considerably across the tumour mass. That is to say that a single biopsy or sample of a tumour seldom had the same targetable genetic changes as another sample from elsewhere in the tumour. Our results question the validity of single-therapy options for the treatment of Medulloblastoma. They also suggest that clinical trials for targeted, patient-specific therapies should first address the potential of this variation throughout the tumour.

Spatial heterogeneity of transcriptional and genetic markers between physically isolated biopsies of a single tumor poses major barriers to the identification of biomarkers and the development of targeted therapies that will be effective against the entire tumor. We analyzed the spatial heterogeneity of multiregional biopsies from 35 patients, using a combination of transcriptomic and genomic profiles. Medulloblastomas (MBs), but not high-grade gliomas (HGGs), demonstrated spatially homogeneous transcriptomes, which allowed for accurate subgrouping of tumors from a single biopsy. Conversely, somatic mutations that affect genes suitable for targeted therapeutics demonstrated high levels of spatial heterogeneity in MB, malignant glioma, and renal cell carcinoma (RCC). Actionable targets found in a single MB biopsy were seldom clonal across the entire tumor, which brings the efficacy of monotherapies against a single target into question. Clinical trials of targeted therapies for MB should first ensure the spatially ubiquitous nature of the target mutation.

Our subsequent research has concentrated on using similar techniques to further define the different types of Medulloblastoma. While Medulloblastoma is widely recognized as being four distinct diseases, the differences within the four disease groups, and the extent of overlap between the four diseases is unknown. We have now managed to show that each of the diseases can be further divided such that there are actually twelve quite distinct disease types, with different diagnoses, prognoses and potential treatments. By refining the boundaries between the four types of Medulloblastoma, and identified clinically and biologically relevant diseases, we can now improve pre-clinical modelling, as well as refine our current clinical treatments.