Faran Rashid is a student at the University of Northern British Columbia.

“My passion for science was reignited,” Rashid said in this article from the Prince George Citizen, May 2017, about his studentship.

Glioblastoma multiforme (GBM) is the most prevalent and aggressive of all known malignant brain tumours. It is extremely difficult to treat GBM as the tumour cells are resistant to conventional treatments. Additionally, existing treatments can damage brain tissue, which is limited in its capacity to self-repair. Evidently so, there is substantial need for new/alternative therapeutic interventions for brain tumours. Many biologically active mushroom fraction extracts have been shown to have anti-tumour properties. For example, the compound Krestin from Coriolus versicolor has growth-inhibitory and immuno-modulatory activities, and has been used in Japan for over 30 years as an adjuvant for chemotherapy. British Columbia is home to a vast range of unexplored mushroom species, many potentially harbouring novel compounds with similar anti-tumour properties. In this project, I will first screen active crude fractions isolated from various wild BC wild mushrooms for growth-inhibitory activity against a panel of 10 human glioblastoma cancer cell lines. The second part of this project involves purification and identification of the responsible growth-inhibitory compound(s) from a selected crude mushroom fraction. Hence, this study has the potential to discover new anti-cancer compound(s) for the treatment of patients with glioblastoma multiforme to improve their quality of life.

About Faran, in his own words… 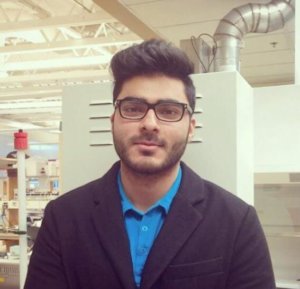 Being awarded a Brain Tumour Research Studentship gives me the opportunity not only to conduct research in a field that I am truly fascinated by but also gives me the potential to conduct meaningful research that can positively impact the lives of individuals suffering from brain tumours. Throughout my life, I have been passionate about science/research and helping others and this studentship will allow to partake in both. I would sincerely like to thank Brain Tumour Foundation of Canada and associated organizations for offering me this amazing opportunity and I am more than excited to begin my research this summer.

My interest in brain tumour research stems from both the complex nature of cancer as a disease as well as the vast complexity of the brain as an organ. Tumours of the brain are not only resistant to current treatment options but they can also damage brain tissue which is limited in its ability to self-repair. Therefore I aim, with this studentship, to discover novel anti-cancer/tumour compounds from the extracts of wild BC mushrooms for the treatment of brain tumours to hopefully increase the quality of life and survivability of glioblastoma patients in the future.

Of the crude mushroom fractions I had available to me, I found two mushroom species that had a significant anti-proliferative effect against the glioblastoma cancer cell lines. Although I cannot disclose the name of the species involved, one was a basidiomycete and the other was a tree fungus. A 5% NaOH extraction of the basidiomycete had on average 60% growth inhibition of the glioblastoma cells as compared to control. A 50% methanol extract of the tree fungus had on average 80% growth inhibition on the glioblastoma cells as compared to control.

Additionally, I ran each crude fraction through a gel filtration column in attempt to separate the compounds according to size. I then tested these fractions again on the cell lines. The basidiomycete activity elutes out in earlier fractions, indicating that it is a relatively larger compound. Anti-proliferative compounds of large size from other studies have been demonstrated to be polysaccharides or proteins. The tree fungus activity came out in a later fraction indicating, meaning that it is of a relatively lower molecular weight. Growth inhibitory compounds from literature that are of low molecular weight can be of a vast range including alkaloids, quinones, terpenoids, etc.

This summer I will focus on the third objective of my experiment which is to further purify and identify the bioactive molecules of interest from both of these species. I will utilize several chromatographic techniques in order to sequentially purify the compounds. I will employ different stationary phases or resins, and development different solvent systems in order to separate the compounds based on chemical differences. For example I can use a silica column to separate the compounds based on polarity, or ion exchange chromatography to separate compounds based on charge. After each purification step I will test the resulting fractions on the glioblastoma cancer cell lines again in order to actively track down the activity. Once I obtain relatively pure fractions for both species I will send them to the Chemistry Facility at the University of Alberta for further detailed HLPC-MS (High Performance Liquid Chromatography-Mass Spectrometry) and NMR (Nuclear Magnetic Resonance) analysis for further compound identification and structural elucidation.

During the second summer working on the brain tumour project involving BC wild mushrooms, my focus was directed towards the third objective of my experiment which was isolating, purifying and identifying the anti-cancer compounds described in the previous research update. I aimed to pursue the 50% methanol extract of the tree fungus, which was speculated to contain a small compound, exhibiting on average 80% growth inhibition of the glioblastoma cells. I performed a large scale extraction of the fungus, followed by several large gel filtration runs which further separated the compounds based on size, in order to maximize the amount of material I could work with for further purification.
I then performed dose-dependent analyses on semi-purified fractions, which showed 80% inhibition at a dose that was four-fold lower than the original extract, indicating further purification. In the next set of purification, I developed a set of HPLC (High-Performance Liquid Chromatography) protocols which I used to further isolate the compound. The UV detector which analyzed the compounds coming out of the column showed one significant peak, which was indicative of a pure compound. I then performed several dozen runs in order to obtain the maximum amount of this pure compound.
This compound was then subject to NMR (Nuclear Magnetic Resonance) analysis for structural elucidation and in order to confirm purity. The results indicated that the compound was relatively small and was of high purity, as the peaks obtained in the experiment seemed to be quite clean with little to no background noise. I am currently working on a dose-dependent assay in order to confirm activity of this compound and further mass spectrometry analysis, which in conjunction with the NMR data, will allow me to determine the identity of the compound.
Read Faran’s final report.
Read more about Faran Rashid’s research in this news article from August 2015.
Back to Top
Next Research Recipient