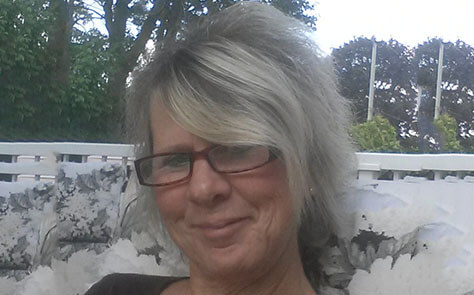 Donna started skating as a child. Aged 15, she began to coach and continued to skate for 37 years. She had motor skills, she had balance. She also had a tumour growing in her brain.

Donna’s brain tumour, a juvenile pilocytic astrocytoma, had probably been in her brain since she was eight years old. Due to a lack of symptoms, it wasn’t discovered until she was 44 years old. When it was discovered, it was almost fatal.

In February 2005 Donna mentioned her headaches to her family doctor. They weren’t normal dull headaches, they pulsated from the back of the head. In May of that year, the headaches came back, along with new symptoms that were affecting her balance. Donna thought maybe her iron was low. The symptoms continued, she began to forget silly things and began to walk into walls. She went to the hospital and was diagnosed with a bad tension headache and sent for a massage to relieve the tension. Days later, Donna was making a cup of tea and mentioned that she was feeling nauseous. Her husband wouldn’t let her finish the tea but took her straight to the hospital. A wise decision. Donna had hydrocephalus, or fluid on the brain. At the hospital, Donna mentioned that she felt as though her blood was not flowing to the brain. This comment prompted a CT scan, where they found a 4.5cm tumour.

Donna’s first thoughts were with her children, as her eldest daughter was about to graduate grade eight. The healthcare professionals told her that she wasn’t going home. Instead, she was taken by ambulance to Kingston, ON and received Decadron to reduce the swelling on the brain.

The following Monday she had surgery that was very successful. The neurosurgeon told her that it was almost like the tumour popped out. As the surgery was so successful, she didn’t need any further treatment, just yearly MRI’s until those stopped two years ago. Donna left hospital ten days after treatment, after helping multiple other people on the ward.

Donna credits her positive attitude to her recovery. She’s also grateful to the surgeon, who happened to be the same surgeon who performed neck surgery on her husband a few years later. “Where his scar ends, my scar starts!” she laughs. Donna was also grateful for the Brain Tumour Handbook she received. “They don’t tell you a lot when you are leaving the hospital,” she said “so the handbook was fantastic”.

Donna is also determined to help others on the brain tumour journey, starting with sharing her story. When asked what advice she had for the newly diagnosed, she said: “Talk about it, have someone listen who understands. If you had a broken arm, it would be easy to fix. The brain is so much more complicated, and that makes it more complicated to explain how you are feeling”. She continues her advice with, “Have faith. Keep a positive attitude and keep your thoughts as best as you can. Never lose hope. There are miracles. They do happen!”