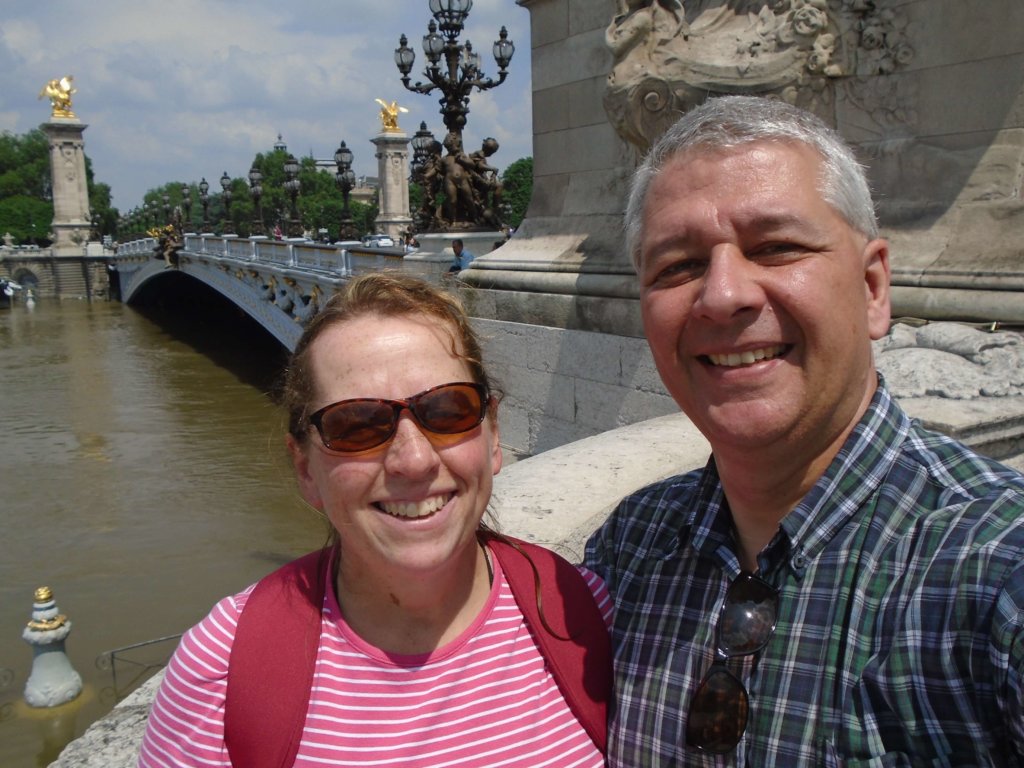 I had headaches, almost daily, for 10 years or more. It was a rare day if I did not have a headache. I used to joke that I should own stock in headache remedy companies. I also had a lot of night sweats, non-restful sleep, and trouble regulating my body temperature. All these symptoms both my GP and I put off to stress. My marriage was not great, I didn’t enjoy my job … I thought it was stress.

My marriage ended in mid-2010. I lived on my own for a couple of years but all my symptoms persisted. I thought I just had new stress to replace the old stress. I had to look after my own home, worry about retirement savings, etc. I had also noticed over the years that I had to turn my head slightly to be able to hear sounds coming from the left. The change was very, very gradual.

In 2014 I met my girlfriend, now my wife. After dating for a while we decided to move in together. A few months later we were sitting in the basement watching a movie. I started to complain that with the fireplace fan and other background noises, I could not hear the movie.

I went to my doctor for a regular checkup and happened to mention the hearing loss. He said he would refer me to an ENT (Ear, Nose and Throat specialist) for a second opinion. I thought I would have a hearing test to confirm the hearing loss; I’d get a hearing aid and be on my way. The ENT said that anytime there is single-sided hearing loss an MRI should be done.

I had the MRI in April 2015. A week later the results were in. I went to the ENT and he told me that I had an acoustic neuroma, 2.5cm in diameter. The estimates were that it had been growing, slowly, for at least 10-15 years. I was referred to London for a consultation for traditional surgery. While there I asked about stereotactic radiosurgery (my ENT had told me about both methods of approaching the tumour – traditional surgery and Gamma Knife).

I was then referred to Toronto Western because London University Hospital does not have a Gamma Knife machine. After attending the consultation in Toronto, and after discussing it with my fiancée, making a detailed pro/con list … I decided to go ahead with Gamma Knife.

Treatment was only a few weeks away in late October 2015. We arrived at the hospital the day before surgery for a high-intensity MRI. After that was done, we had the rest of the day free. So we went to the ROM and had a lovely dinner at the CN Tower restaurant.

Next morning, Wednesday, we had to arrive at the hospital at 4:30 am. The titanium head frame was attached by the team of doctors. The frame has four pins that secure it to your head, two on the forehead and two on the lower back of your head. The frame is quite light. The pins are tight and break the skin but they are not bolts that are drilled into your head.

There were two of us getting Gamma Knife treatment that morning and one other patient in the afternoon. Once the head frame was on, I was taken for a scan (I think it was an MRI but am not sure. It could have been a CT scan). The head frame is bolted into the scan machine so that the tumour can be mapped very precisely. After the scan, I was taken back to the ward to wait for treatment. The other patient was first so I had to wait a while. My fiancée went to the coffee shop in the hospital and got us coffee and muffins. We hadn’t eaten yet that morning. The crossbar on the head frame crossed my mouth and it’s over an inch wide. Needless to say, it was quite amusing to see me drinking coffee through a straw. Eating the muffin involved breaking it into small pieces, then tilting my head up so that I could drop the muffin between my lips and the head frame, hoping it would hit my mouth.

I was taken to the Gamma Knife room in a wheelchair. You can’t turn your head with the frame on so it’s not safe to walk. There was a wait while the Gamma Knife was programmed according to the scan mapping.

When ready, I was helped onto the table. The head frame had a heavy attachment locked onto the back of it. The frame was quite heavy now and I needed help lying down. The frame was bolted into the Gamma Knife machine. The room was cool and blankets were offered. The machine opened and the table slid into it. The machinery around you looks like a giant metal colander. The doctors explained that the beams go through the apertures in the ‘colander’ and where they intersect inside your head; the tumour is burnt by the radiation.

Once the programming was completed, everyone left the room. It is a big room. The machine takes up about a quarter of the room. The shielding on the room is immense. The doors are three to four inches thick with giant hinges.

The technicians asked me through the intercom if I wanted music. I opted for classical music and they adjusted it to the volume that I wanted. Then they said to relax and the treatment would start soon. The radiation is utterly silent so you have no idea when it actually begins. My treatment was to be 45 minutes.

I fell asleep and suddenly I heard someone say we were all done. I had had a nice nap. I was taken out of the machine and helped into the wheelchair. A doctor removed the head frame and bandages were applied to the four pinpoints. I was wheeled back to the ward and given juice and water. I had to rest in the bed for an hour or two.

My fiancée drove us home to Kitchener. I had a headache but overall felt pretty good. When we got near home I started to feel a little off. When we were home and changed, I had to run to the washroom to throw up. I drank a lot of water and took some headache pills. Then I went to bed at 3:30 pm. I woke up later in the evening and threw up again. Then I slept for 10-12 hours straight.

The next morning I felt pretty good but was really tired. I overdid it by staying up for 8 hours. As a result, I was not feeling well and went back to bed for another 10 hours. The surgery had been on Wednesday. The weekend was not too bad. No more sickness but very tired. I was scheduled to go back to work on Monday. My fiancée suggested that I should at least take a couple more days off. I stayed home on Monday and Tuesday. I went back to work on Wednesday, one week after the treatment. By this time, there was an almost complete reversal of my symptoms, the headaches and night sweats had disappeared.

So, overall, my experience was relatively painless and very fast from discovery to ‘cure’. I feel very lucky that the tumour affected my hearing such that the tumour was discovered before it was a bigger problem.

My next MRI is in October 2018. I’m hoping for 2.2 or 2.3cm measurement. I will probably graduate to 3-year MRIs if everything is going well. I am very grateful for all the wonderful doctors, nurses, MRI staff, and everyone who I have met through this journey.

And, in June 2016, I married my fiancée Debbie and we are living happily ever after!