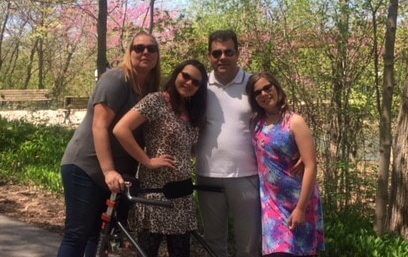 Within seconds of sitting down with Debbie, I had learnt that she had a brain tumour, her husband had kidney cancer, her eldest daughter was born with a physical disability affecting her mobility and then her youngest daughter, Debbie called her “the healthy one”, also had a brain tumour. At some point, each of them has learnt to care for each other.

Debbie’s brain tumour came first. In 2003 she was diagnosed with an acoustic neuroma after a phone call with her boss where, on the one ear it sounded as though he were speaking Latin but, when she switched to the other ear he sounded normal. After 16 hours in surgery, she spent a year in and out of hospital with multiple CSF leaks and a mistake that almost killed her. As a result, she has lost some hearing, has no eardrum in one ear, and suffers frequent debilitating headaches.

Despite all she went through, she confessed to having tremendous guilt when her youngest daughter was diagnosed with a brain tumour, thinking that she had given it to her. The genetic testing proved otherwise.

Her daughter’s diagnosis did not come easily. In November 2015, eight-year-old Sammy had a very bad case of pneumonia. After Christmas she had healed but continued to lose weight, and she had constant headaches. Doctors dismissed these symptoms as migraines. By April, Sammy’s school were concerned when her face started to swell. The doctor again said these were migraines and possible allergies as they had recently relocated to the country. By late June, the Emergency Room said it was classic migraines and refused to scan her. Sammy had been a competitive dancer since the age of four, so Debbie knew that something was seriously wrong when Sammy said she couldn’t keep up anymore, saying “Mommy, my feet won’t do what I want them to”. Debbie continued to advocate for her daughter and so her pediatrician referred her to a neurologist. Five minutes into that appointment, when Sammy’s eye started jumping during a simple eye tracking test and she had fallen over during a balance exercise, they knew something was seriously wrong. Sammy was sent for an emergency MRI which revealed a 5.5cm Juvenile Pilocytic Astrocytoma (JPA) compressing on her brainstem.

They were sent to London Children’s Hospital and were greeted by a huge team. Sammy went through 18 hours of surgery. When the neurosurgeon came out, she said: “I couldn’t leave until I got the whole darn thing”. Debbie refers to this surgeon as Dr. Angel for this surgery and for the exceptional care they personally gave to Sammy.

Following surgery, Sammy was told that she wouldn’t be able to dance again. Debbie told her: “Never accept what they tell you. Listen to it, absorb it, then prove them wrong.” Sammy’s surgery was in August. By October, she was dancing again. Recently, Sammy was awarded third place overall in her category!

That doesn’t mean that her recovery was easy. Her elder sister helped Sammy when she had to learn to walk again. Debbie said: “My kids switched roles for a while, it’s helped them to understand each other better”.

This year, both mother and daughter will walk side-by-side as brain tumour survivors, proudly wearing the distinctive blue t-shirts, at the London Brain Tumour Walk on June 10, 2018.

The family also frequently attend BrainWAVE events. “BrainWAVE has been a life-line for Sammy. It’s so great to meet other families who understand what it’s like to feel different”.

Debbie explains that Sammy now feels: “I was supposed to be her Mom because I could help her, as I understand what it’s like to have a brain tumour”.

Debbie is now taking that level of understanding to help others on the brain tumour journey by helping to compile a new caregiver resource. We are so grateful to this ‘family of 4 Strong’!