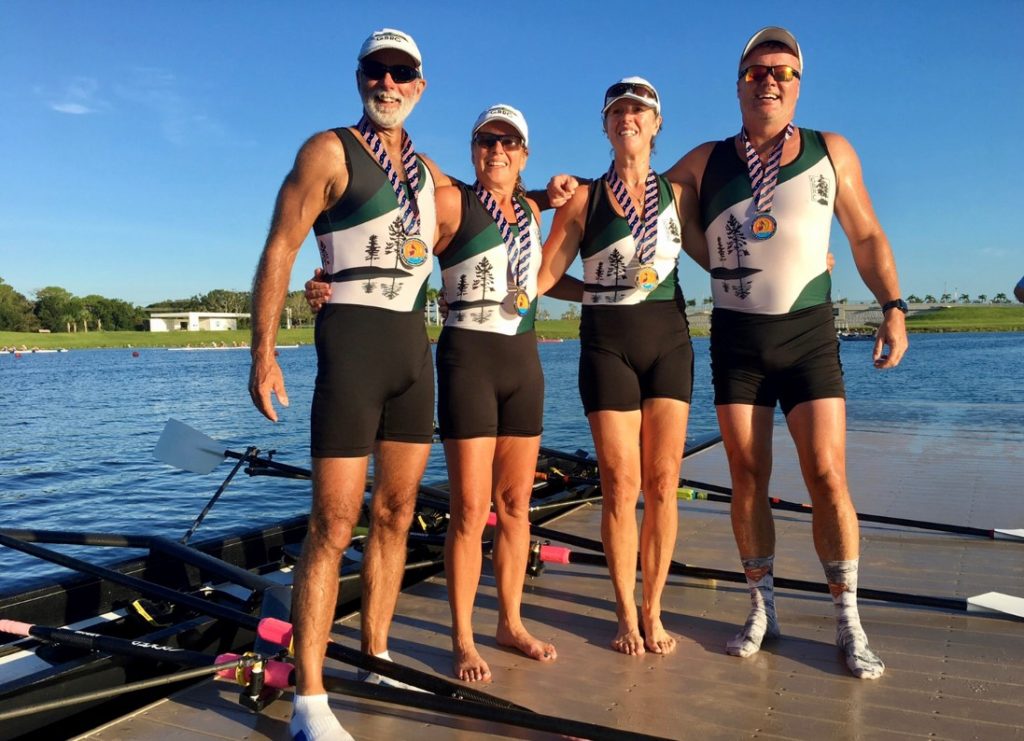 I am Doug, I have brain cancer; I am told it is terminal, but the “good” kind of terminal. I can assure you that receiving that news was not as good as I think the people telling me thought it would be. But I choose never to define myself with negatives or problems so I will begin again; Hi, my name is Doug, a current defending two-time world rowing champion. That sounds better. Here is just a small summary of my adventure last year.

My diagnosis came as a result of my somewhat reckless approach to life. After suffering three significant head injuries in the winter of 2014, all revolving around snowboarding and trying to show my kids that I am cool, I began showing signs of severe fatigue and headaches. I found myself waking up on the floor confused and angry (most people refer to that as having seizures; we did not realize that at the time). My family physician thought it would be best to have an MRI completed. I did not argue but I honestly was not planning on attending. The day before the MRI I had a metal rack drop on my head, so away I went.

Leading up to, and the day of diagnosis, was an experience. During the MRI they stopped the test and the technician came in and added an IV with contrast. The technician’s hands were shaking so I knew there was an issue. When I asked how bad it was, she stuttered out that I would know soon and it was not bad enough for immediate admission to the hospital. The test was on Friday evening. That following Monday I was called into my doctor’s office. His statement was this, and I quote “I have some good news for you… the headaches you have been having are not all in your head, you have a  brain tumour…….” followed by an “I am sorry” and a gentle pat on the shoulder (not exactly great news). He pulled my driving immediately and told me I was retired from work and athletics. I was told I should get my affairs in order as it could be a quick ending, the statement of 3 months to live came up more than once.

The diagnosis happened on June 7, 2015, one week before I was to start another racing season. I am a rower; In 2014 my doubles partner, Jeff, and I won the Royal Canadian Henley, our equivalent to a national championship and we were in training ready to defend. I coach and train full time 7 days a week, 11-17 times per week. This was my life, my passion, I had raced and rowed all over North America since I was 14 years old. It is all I know. I was told I would never row again. Wow, talk about doom and gloom!

Within a week, I was at St. Mikes in Toronto and further investigation began. After a whole bunch of MRI’s, multiple appointments, and a full year of stress, I finally found a physician who said it was ok to start training again. (I may have slightly down-played the intensity of my training). Cue the comeback!

The next year was all workout, no fun. My intensity and drive were fueled by a sense of urgency I had never felt before. I was striving to reclaim who I am and was not accepting the” new reality” that everyone preaches. My body was sound and I had a desire to show my kids what can be done when your mind and heart are in the right place. That is when a very unique opportunity presented itself – World Masters Championship was coming back to North America for the first time in 8 years, and it would be held in Sarasota, Florida in September 2018. I had only ever raced that particular race one other time, finishing a disappointing third in 2010. It was time to fix that.

I had headaches daily, I was fatigued and stressed. The migraines would last for days. The bonus to going off work and not driving was that I could rest and stop activity, as well a significant amount of stress was eliminated. As a result, the frequency of seizures diminished. I was very focused on my goals for the World Championships. I kept the stress hidden (that is an important statement); The stress gets buried with activity, I never actually dealt with it.

With a few scares along the way, and more appointments and tests than I would like, fast forward to April 2018. What I thought was supposed to be a routine appointment with my neurosurgeon (for some reason people are impressed when I say I have one of those) was not. The latest MRI showed changes and we had waited long enough the tumour had to come out. (Well ugh!) Following long discussions and debate, we settled on a date, the week after the Worlds. The surgeon was confident that it would not impact my mortality if we waited a few months (This again is not a great statement to hear when dealing with cancer). My instructions from him were simple; have an amazing racing season, in all likelihood this would be my last.

My goal was even simpler: Win everything! Going into September I had raced 38 times and medaled in 35 of them, not perfect but by far the most aggressive and successful season to date for me. During the World Championships, I had eight races against 4000 of the fastest competitors in masters rowing from all around the world. Game on, lets race!

The drive to Florida was uneventful, other than getting a call from the surgeon and booking the surgery for the following week. (Everything got real from that point on). After hundreds of training hours, the thousands of km on the lake, and mountains of weights moved, it all came down to this. I had eight races of 1,000 meters, three very intense minutes per race. Our team was so successful that we won 14 gold medals. Amazing for a small Canadian club from Northern Ontario. I was able to take home two gold medals.

While this was not exactly the plan, I have a high degree of respect for my competition. I am not sure any of them would have had any idea of all of the stuff I was dealing with. I kept it secret from most of the crew for the competition (hiding illness and pain is something we do as rowers and I am learning as cancer patients as well.) In the end, we were the top Canadian club and every one of our crew members medaled. We had accomplished all of our goals as a group.

An exclamation mark was placed at the end of my career as a rower…or was it? Upon my return, I was admitted to the hospital for a craniotomy. (I do have a cool scar.) Unfortunately, the biopsy showed a cancerous astrocytoma/low-grade glioma. According to the experts, that is the good kind of terminal cancer to have. (According to the patient, not so much.) The life expectancy is a big question mark, but for me, the surgery was a huge success. The location of the tumour was of concern; I was at risk for paralysis blindness and affected speech, none of that happened. In fact, I received a call from the surgeon 2 weeks to the day following surgery. My first and only question was “can I go for a row?” After some debate, he agreed to very light row. I truly tried to stick to the restriction, mostly because I did not want to give my partner a heart attack. Cue the comeback!

As for me, as always, my future has yet to be written. Hi, I am Doug, world champion, cancer survivor and future……