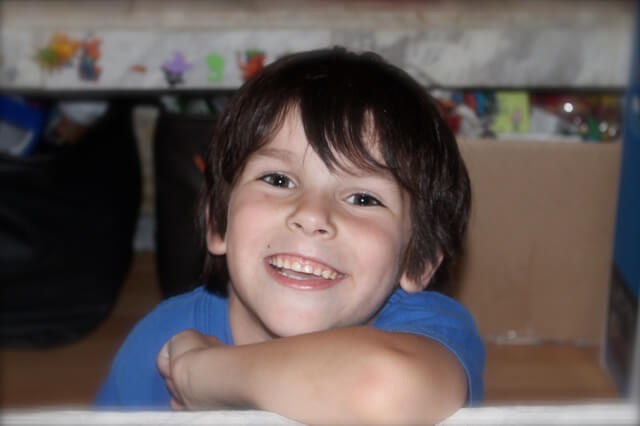 It was just a toddler taking a tumble down a couple of stairs. The doctors tried to reassure Mom that all was probably okay. But Dustin’s Mom knew that something wasn’t right. Time would prove that her instincts were correct.

Dustin was just 3 years old in the summer of 2012. He’d had a couple vomiting episodes upon waking but was then fine. Those times were a month apart. No alarm bells were ringing, although Dustin’s Mom called the Nurses Helpline to check and was asked about an intestinal blockage, of which there was none.

About six weeks after Dustin’s third birthday, Dustin was at a relative’s house when he fell down a couple of steps. The relative didn’t want to worry Mom so told her about it when she picked him up a couple hours later. Mom said, “He looked wonky”. To be sure there was no concussion, Dustin’s Mom took him to the BC Children’s Hospital where “I remember thinking, the worst possible diagnosis would be a brain tumour’’.

The doctors did some tests, and they were kept overnight. The doctors tried to reassure Mom that Dustin likely had an inner ear issue or mild concussion, although they did ask whether Dustin was just goofing around. The next morning some doctors from the Neuro department came and Dustin’s Mom asked them to watch him walk. Dustin stood and immediately fell.  It was only at this point that the doctor’s smiles turned into frowns and they ordered a CT scan.

After the CT scan, three people came in to see Dustin’s Mom, including the head of the neurology department. An accompanying resident looked teary. Dustin’s Mom was told that there was a tumour at the nape of the neck that had tapped off the spinal fluid, causing severe hydrocephalus. Dustin needed immediate surgery to remove the pressure. Mom immediately called her husband and her Mom to the hospital. Surgery was successful, removing 99.9% of the tumour, leaving an amount behind about the size of a grain of rice as it was located on a blood vessel. The original diagnosis was a neuroblastoma but when the tumour was analyzed the diagnosis was changed to medulloblastoma. With the new diagnosis came a certainty around how to proceed. The doctors told Dustin’s parents “If we don’t treat this, it will come back”. So they prepared to spend the next six months at the hospital.

Dustin’s treatment was called “Headstart 2” an intense form of chemotherapy involving 5 different chemo medications. Day zero was in mid-September. In October, Dustin had his stem cells removed with a machine that was like dialysis, filtering Dustin’s blood through four times, each time skimming off the stem cells. Throughout the treatment program, Dustin would have his immune system boosted to stimulate the white blood cells, only to have them clobbered again. Dustin’s parents watched him suffer fevers, mouth sores, nausea, issues with kidneys dumping sodium, a fungal lung infection…  Dustin took Benadryl as he was itchy from the methotrexate. Dustin didn’t have just one IV line, he had a tree with 4 or 5 lines, plus a nasogastric tube, plus a central line. Because he didn’t walk for a while, he had to go through physiotherapy to get his strength back.  In February, Dustin got his own stem cells back.

By Dustin’s 4th Birthday in July, the central line and NG were out.  By Dustin’s 5th Birthday, he was attending Kindergarten, albeit for shorter days and with more time away for hospital appointments than the other children in the class.

Dustin is now in Grade 1 and doing well. He has some high-frequency hearing loss but with no need for hearing aids. You can’t see the scars from the surgery. Dustin is still undergoing regular MRIs to check for regrowth, but otherwise is showing no signs of ill effects from the treatment.  Dustin is joining the BrainWAVE program and Dustin’s parents hope that one day he will apply for the Youth Education Awards.

Looking back on the experience, it’s easier for Dustin’s Mom to recognize the symptoms of the early morning vomiting and wonky gait and she urges everyone to know the signs of a brain tumour. That’s why she’s sharing Dustin’s story and also to urge everyone to trust their instincts and “don’t second guess your gut instinct”. The neurosurgeon told her after surgery that if she had not brought Dustin to the hospital, he would have been dead within four days.
Dustin’s Mom had one more thing to say.

During treatment, Dustin received at least 50 transfusions, mostly red blood cells and platelets, but also some plasma. “These oncology kids need so many transfusions, just to be able to continue on with treatment. Sometimes there wasn’t blood for Dustin that was readily available locally and it needed to be brought in from Vancouver Island or other parts of B.C.

A side note is, that if one is willing and eligible to donate blood, it truly is lifesaving in these situations and of course many others. Dustin’s dad and I donate as often as we can. We know how much need there is. I think Canadian Blood Services told me that only 3% of Canadians donate blood. My husband said it is the same people donating over and over. Please give. It costs nothing but time.” Update 2019: Dustin in now in Grade 5, doing well in school, and quite the character. He will need hearing aids as he is occasionally missing hearing things in class but is otherwise doing well. His Mom had a small panic in September when Dustin complained of a swirly feeling where the surgery took place, “No-one should be worrying but at the same time, if your child suggests that something isn’t right, get it checked out”. Fortunately, the doctors checked Dustin in September and everything is fine. They are getting ready for their annual check-up, but hoping that patterns of good scans continue.

The family would like to again stress the importance of everyone who is willing and eligible to donate blood, to please do so. “Blood transfusions were essential for Dustin’s survival and necessary during his chemo treatments. Blood donations are lifesaving for many, not just Oncology patients. Without blood donors, there would be far less survivors of illness or injury.”

Back to Top
Next Pediatric