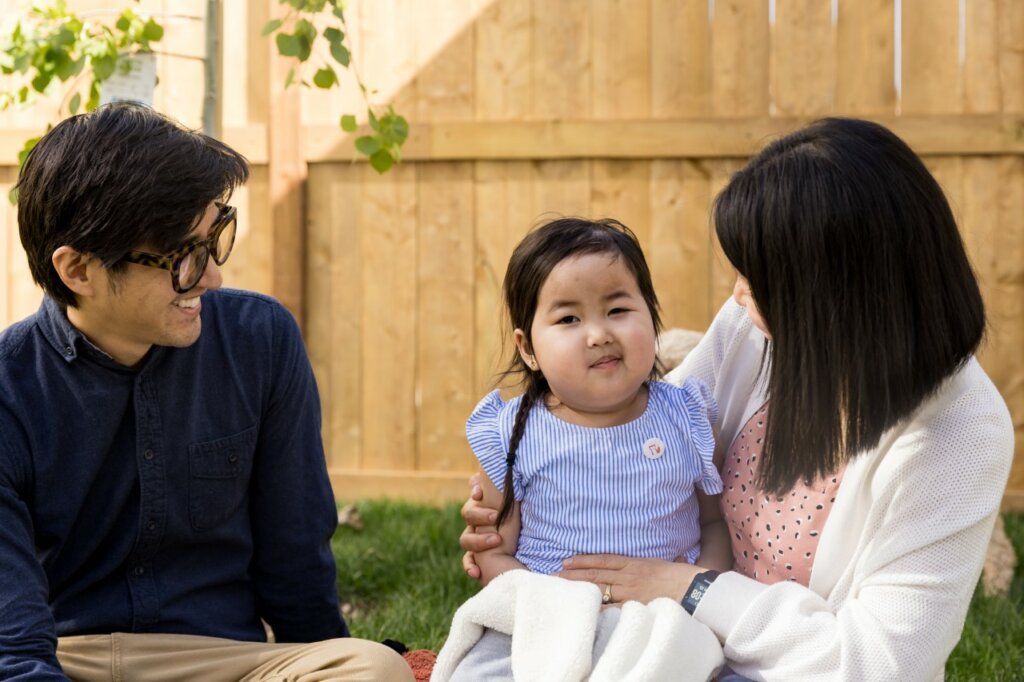 You can live to 99 and still not accomplish everything on your list.

“As parents, you have dreams and aspirations for your children, whether it’s going to college, having their first crush, playing sports, or travelling,” says Catherine Gulinao.

Coming from a tight-knit family in Calgary, Penn Manabat knew she was dearly loved by her aunts, uncles, grandparents, mother, father, big sister Paige, and dog Pepper Potts. She had over 20 cousins.

Penn thrived at school. She also loved pirates, the playground, and her favorite animal was the fox. She was given a stuffed fox as a baby, which she named “Dox”.

“She was just very imaginative and was an absolute foodie. Her favorite foods were ice cream, croissants, chocolate, and a Japanese pancake called Okonomiyaki,” recalls her mother.

Penn’s family nurtured her into becoming a healthy three-year-old; intelligent, articulate, and had a one-of-a-kind personality. 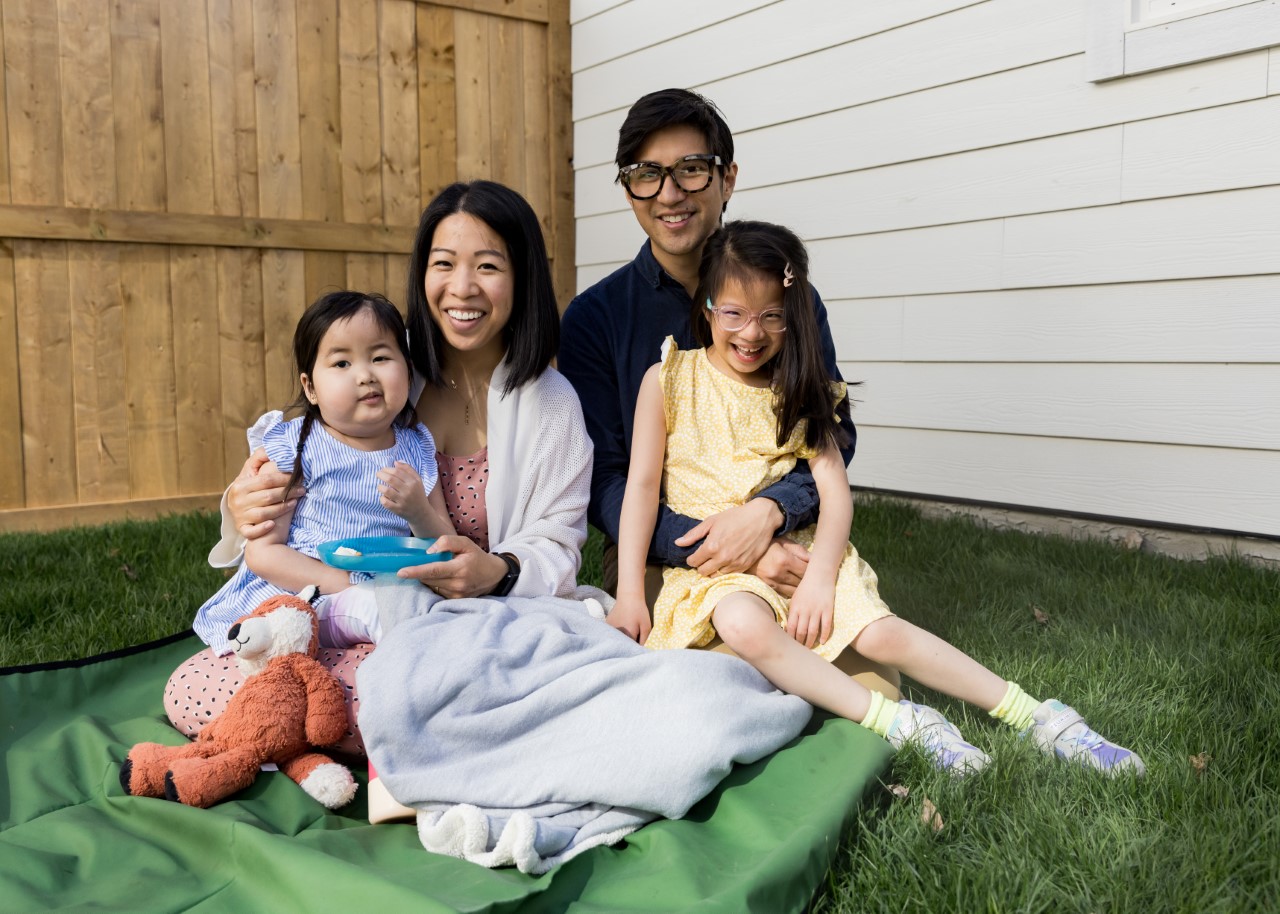 “If she saw someone that was left out, that would be the person she would be drawn to, just to make sure they knew they were loved, and not forgotten,” remembers Catherine proudly.

“She was mature beyond her years. Even when she was going through so much pain, I know she was thinking a lot about Mom, Dad, and Paige.”

Late one night in February of 2021, Penn started to have pains causing her to scream and cry in agony.

“We had no idea what was going on. We assumed it was growing pains. My cousin has a daughter around the same age as Penn, and was also going through the same thing,” says Catherine.

“Two weeks later, she grew an inch after it happened. We just thought that’s what it was.”

For two months, the excruciating pain stopped. It wasn’t until the end of April when it returned. Catherine and Sheldon knew there was something seriously wrong.

“We were in the height of the COVID pandemic. One Wednesday, we had a virtual phone call with one of the ER doctors at the Alberta Children’s Hospital. Penn was assessed and was thought to be fine. A blood work requisition was sent in,” Catherine says.

Two days later, early Friday morning, Penn was experiencing the extreme pains again and a slight tremor in her right hand. These symptoms would require a hospital visit and a subsequent CT scan.

“I knew it was bad news when the doctor rushed out of the CT scan room before the lengthy scan was completed,” her mother remembers.

A significant, tangerine-sized mass was discovered on the left side of her brain. Other than the tremor, Penn had no other symptoms, such as nausea, vomiting, blindness, or paralysis, and she was still able to speak.

Three days later, Penn had a craniotomy. She showed remarkable resilience and strength.

“She did amazing after her brain surgery. She was very alert and was able to recall her favorite foods. She even said, ‘Mom, I’m so brave.’ That’s how we came up with the name Penn the Brave,” states Catherine.

After the operation, Catherine and Sheldon received the news that Penn had a tumour. It was originally thought to be glioblastoma, a fatal kind of brain cancer. 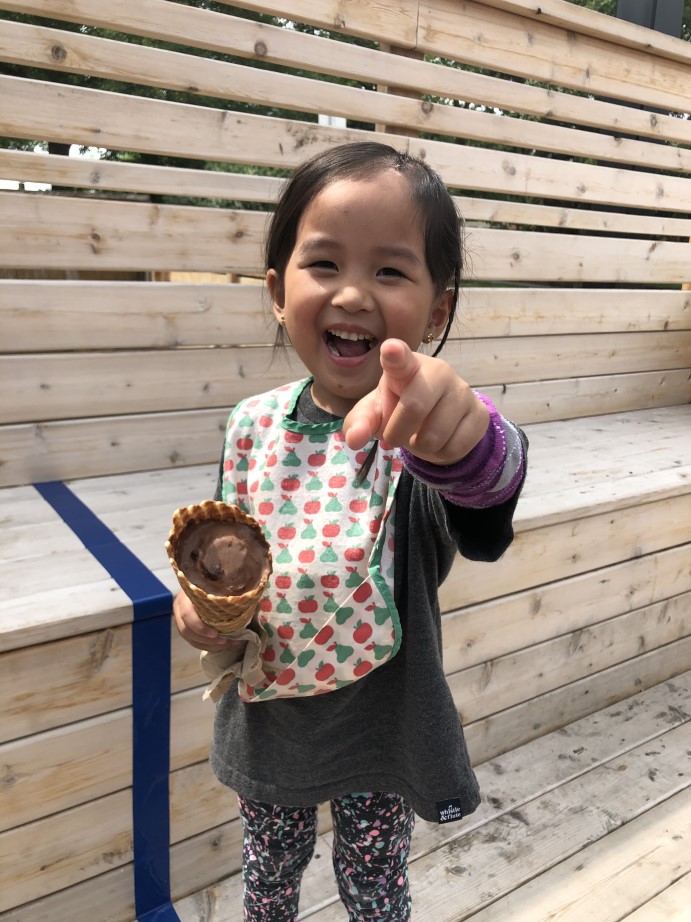 The second report from SickKids Hospital in Toronto, however, diagnosed Penn with anaplastic ependymoma. Although this grade of brain cancer is a higher-grade glioma, the survival rate is better than that of glioblastoma. This gave the family hope.

“When the doctors realized they could change Penn’s treatment plan to just radiation, within six weeks her tumour grew back. She would need a second craniotomy,” explains Catherine.

“She did incredible, but she lost her entire blood supply. We really appreciate blood donors because Penn wouldn’t have survived otherwise.”

In seven days, Penn was able to walk out of the hospital. Three days later, she started her radiation treatment.

“She did quite well up until March 8th, 2022—International Women’s Day-when her routine MRI showed a recurrence of the cancer. It had spread throughout her brain, including her spine,” her mother remembers.

Throughout Penn’s cancer treatment, she had routine MRIs where she would need to be sedated; two invasive craniotomies, 33 grueling radiation treatments, along with three rounds of palliative chemotherapy.

Pending her diagnosis, it was isolating for the family not to know any other cancer families or patients. Catherine and Sheldon could not meet other parents when their daughter was undergoing treatment.

There was a specific schedule of “one in, one out procedure”, to prevent crossing paths with anyone who may be infected with the coronavirus.

“At the time of her diagnosis, that was not even possible. This was very challenging for us, because Penn didn’t know anyone else who was walking a similar journey as her,” Catherine says.

In the late 1970’s and early 80’s, Catherine and Sheldon’s parents immigrated from the Philippines to Calgary.

Upon doing initial research on Penn’s condition, the family saw there was little diversity in people of color sharing their experiences.

“Cancer does not discriminate between age, gender, or race. It’s important for families of all backgrounds to know that they’re not alone,” Catherine advocates.

Her hope is for other children to connect with individuals and share similarities, which could resonate with them throughout their own personal journey.

From the prognosis of their daughter’s cancer to getting a second opinion, Sheldon and Catherine were determined to learn everything they could. They learned about Brain Tumour Foundation of Canada when Penn was first diagnosed.

“It was so frustrating to know that there have been shifts in adult-related cancers, but not in the pediatric world,” states Catherine. 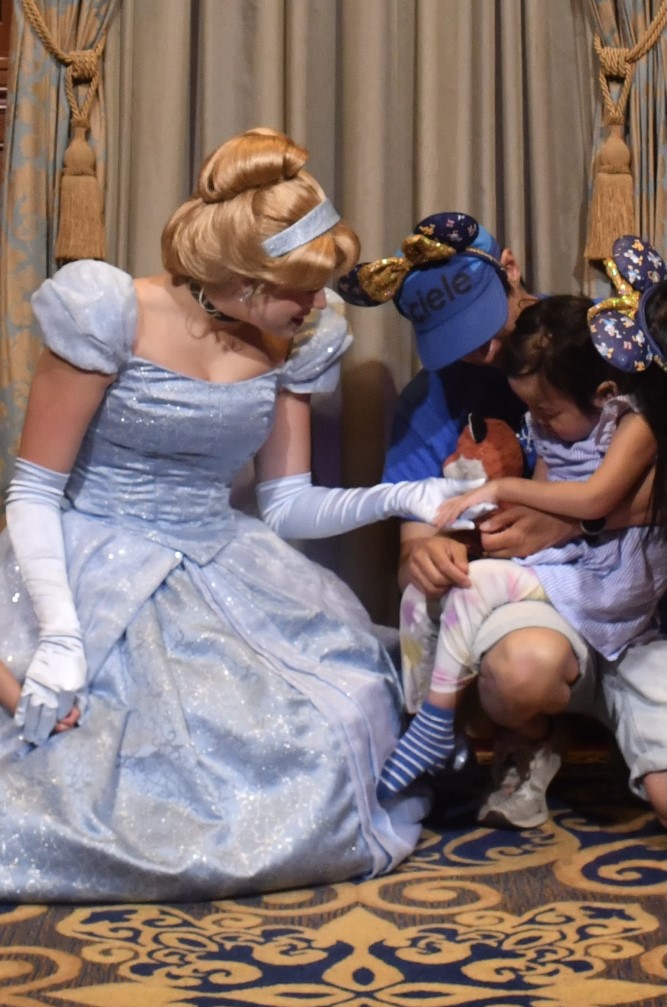 Penn’s parents were transparent about their daughter’s experience and treatment. They made sure to answer any questions Penn had about her illness. She was very aware as to what was happening to her and had lost three quarters of her hair.

Most of all, they made sure she never felt alone.

“We didn’t want to shelter her from the reality she was facing. Sheldon and I had conversations with her about what might happen when she went to school. For example, kids might ask why she was bald,” Catherine explains.

Catherine is grateful for the support that she and Sheldon received from their workplaces.

“Not everybody has the privilege to take the time off. Every day was a gift because we didn’t know how much time we had left with her,” says Catherine.

The family learned there was a recurrence, and there were no other treatment options available, except for palliative chemo. Sheldon and Catherine chose temozolomide because it could be administered at home and wanted her to be as comfortable as possible. They are very thankful for the amazing team at The Alberta Children’s Hospital.

“I am brave” — Penn Eloise Manabat

“She said that multiple times throughout her different treatments, “I am brave. I’m so brave, Mommy– or I’m so brave, Daddy,” remembers Catherine fondly.

Penn created her own bucket list, which made her parents extremely proud. After her radiation treatments, she would go to the local ice cream shop, or enjoy baked goods.

Despite being immunocompromised from her treatments, Penn was able to fulfill her last wishes to see Cinderella in Disney World or watch in awe at the whales swimming in the ocean.

“It wasn’t about us anymore, and we asked her what she wanted to do. She told us, and we wrote it down. Some of them were simple. ‘I want to go to the playground every day, I want to throw rocks in the river and go camping,’” states her mother.

Penn had always loved bubble gum ice cream, but it was never available at her favorite store. The family connected with Made by Marcus, a local Calgary ice cream chain. They created Penn’s Bubble Gum ice cream, with all proceeds going towards brain cancer research.

In partnership with the Made by Marcus Foundation, Penn’s family raised over one thousand dollars. Catherine gave the proceeds to Brain Tumour Foundation of Canada.

“We always told her, ‘You’re always in our heart.’ When she could no longer speak, she would always touch her heart,” she remembers lovingly. 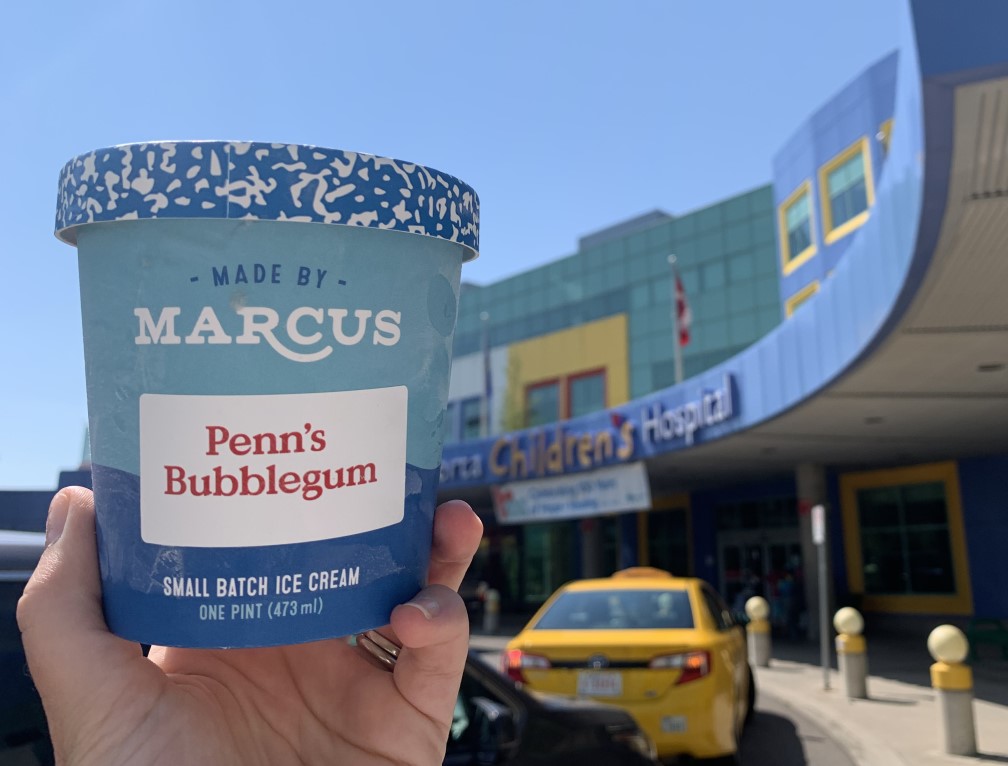 The family takes things sometimes minute by minute. Paige loves to look at videos and pictures of their time together.

“It’s a way for her to be at that moment with her sister, which makes her happy. What we must realize is that everybody grieves differently. We have recognized and respected our various forms of grief. Be kind to yourself. Even if you can just eat two crackers and have a shower, you still have given it 100% because that’s all you can give. Tomorrow’s another day,” encourages Catherine.

Despite not having the ending they had wished for; her family remains very hopeful that a cure for brain cancer is possible.

Although Penn cannot be here physically, she is still able to touch lives each day, in her own special way. Since she has died, Penn has guided her family to places. For them, it is a sign that she wants them to move forward.

“It’s about being true to Penn and remembering that this is for her. It’s for her legacy to continue. She was able to accomplish so much, and touch so many people’s lives in a very short time. That’s something I think that’s one of so many things she’s going to be known for,” says Catherine.

Thank you, Team Penn the Brave!