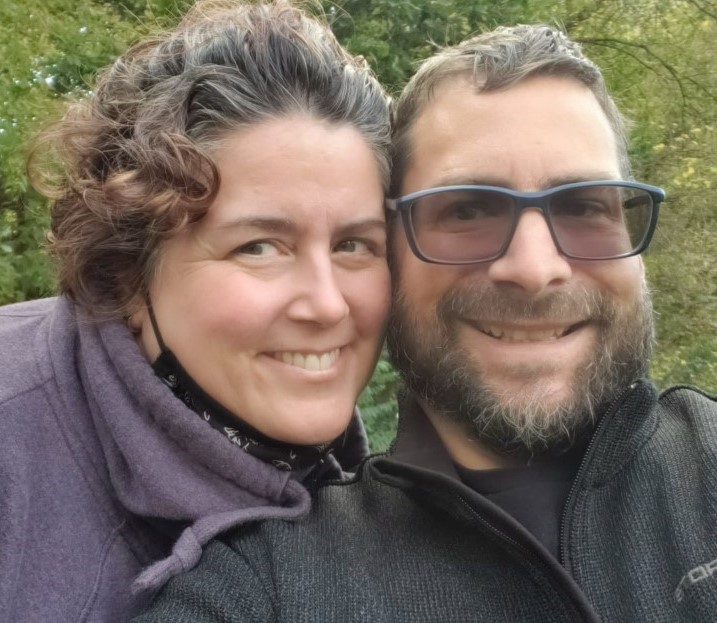 The Merriam-Webster dictionary defines resilience as “the capability of a strained body to recover its size and shape after deformation, especially by compressive stress”; courage as “the ability to do something you know is difficult or dangerous”; and hope as “to want something to happen or be true and think that it could happen or be true”.

For nearly three decades, Sarah Blanchard has embodied the true meaning of these words, throughout her endless journey with a brain tumour. 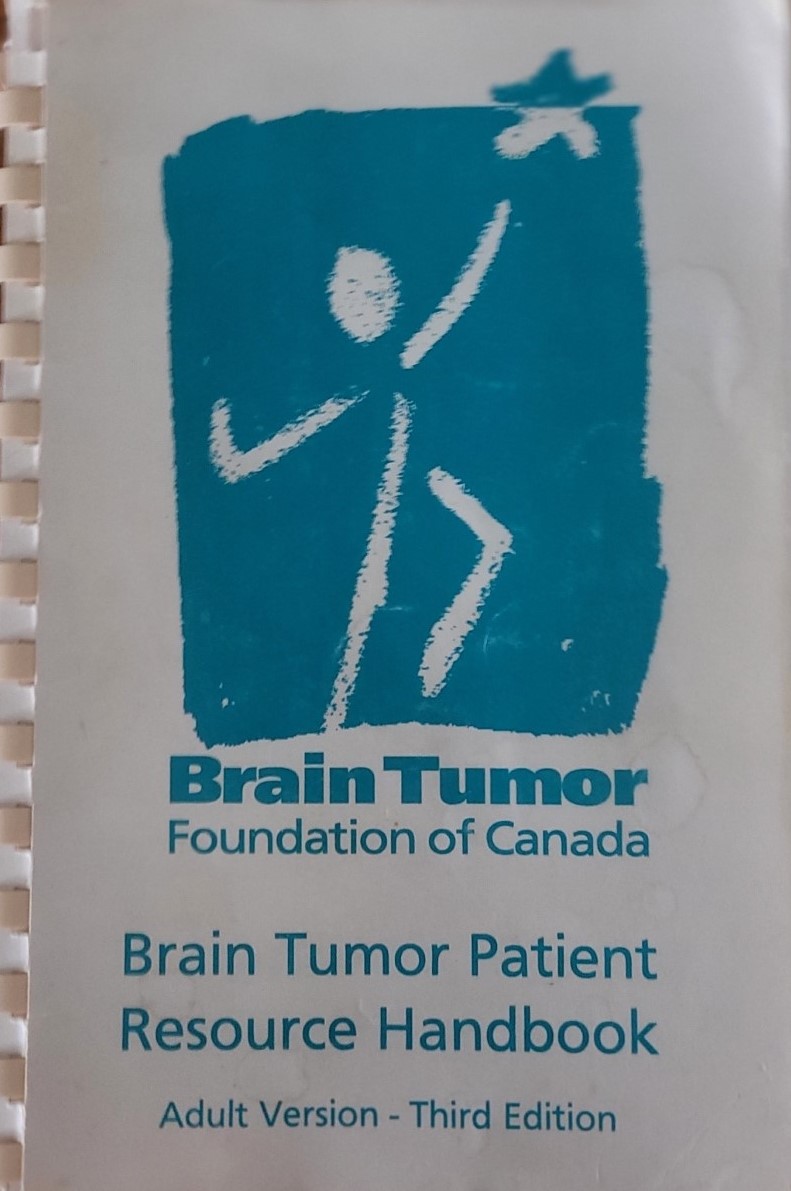 “I do not fit neatly into a box, I fit into several boxes,” she says.

At 21 years of age, she was diagnosed with a pilocytic astrocytoma. A biopsy was performed on the tumour, which proved to be non-malignant. Surgery was still needed, however. The first operation was completed in October 1996, by one of the only four female neurosurgeons nationwide at that time.

After this operation, an ICP tube was put into her brain, by drilling a hole through the skull. Even though the wound has healed, Sarah still feels pain, “it feels like an ice pick is being driven into my head. When the weather changes, I feel it. Much like a person with arthritis does.”

It was also then that Sarah began researching brain tumours. During that time, she received a third edition of the Patient Resource Handbook, which was published through the Brain Tumour Foundation of Canada. Through the organization’s website, PDF versions are now available for patients, caregivers, and families.

One year and four months after her first craniotomy, Sarah had a second operation in February of 1998, with minimal complications at that point.

She was scheduled for a third craniotomy only nine months later in November 1998. “I was on the six-month routine of having MRIs. And so, they found it on this, and that it was growing.” She experienced cerebrospinal fluid (CSF) leaking out of her incision area. Sarah had to remain lying down until the incision dried out and closed.

In June of 1999, she started 25 rounds of radiation, which came with life-altering side effects. She constantly felt nauseous; lost her hair twice, her sense of taste and smell, and is also prone to memory loss. From the onset of her condition, Sarah has and continues to be affected with tinnitus, which is a constant ringing in the ear/s. 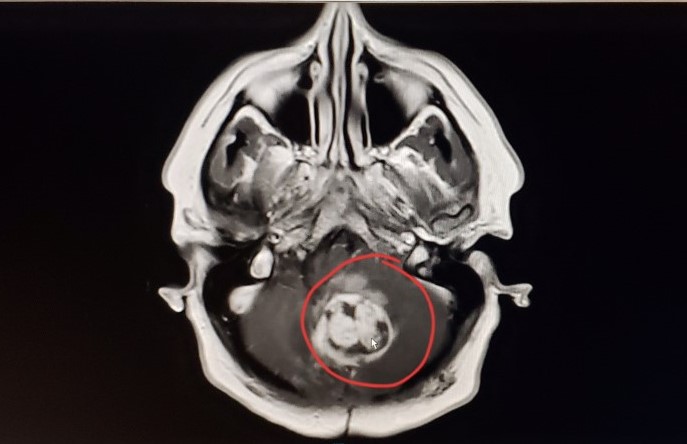 When Sarah was 33, it was now 5 years since the last radiation treatment. Despite the emotional and physical trauma, she had suffered, she was clear from tumours, “I could finally start living again”.

Marc Anthony says that if you do what you love, you will never work a day in your life. Sarah and her fiancé Todd own a dog walking company.

“I found what I loved. You know, it’s not everybody that finds a job that they love, and they don’t feel it is work. I worked as a server, bartender, and manager at different restaurants for decades, working sometimes 10 hours a day. I have never run from hard work, so when my body said “no”, but my mind said “yes”, I was mad!” Sarah exclaimed.

On March 5th, 2020, Sarah’s world turned upside down for the fourth time; her tumour had come back. She was a 45-year-old businesswoman and fiancée to Todd. The following day she was put on a steroid treatment which increased her appetite and swelling throughout her body. She spent two months recovering in hospital during the pandemic.

On June 26th, 2020, Sarah Blanchard went in for her fourth craniotomy. After being discharged from hospital in July, she was readmitted a week later. At that time a VP shunt was surgically placed in her brain at the back of her head. 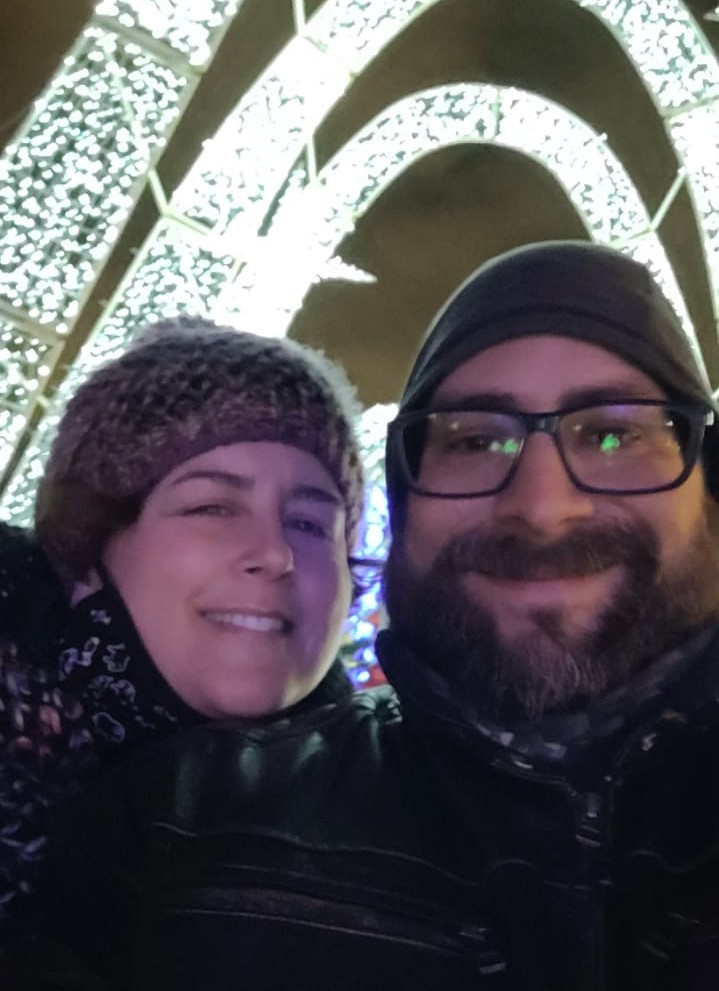 The surgery was a success, however Sarah unfortunately developed radiation necrosis. This meant that the debris from her previous radiation treatment over 20 years ago had not completely dissipated inside her skull. The radiation necrosis caused a bacterial infection and pulmonary embolism. She experienced other complications of the condition, such as nausea, loss of appetite and low levels of potassium and iron. She was constantly subject to medication, tests, and procedures, including two lumbar punctures and a pic line.

Sarah felt very alone as she was not permitted any visitors but found comfort in videos being sent from loved ones, “I especially enjoyed the videos Todd would send of the dogs at the park. It made me smile to see them just running around, chewing a bone, or carrying a stick, doing what dogs do– being happy and playful.”

During the two months she spent recovering in hospital, she needed to learn how to walk again.

“I had weak muscles in my legs. I had to crawl to my bed about five feet away and pull myself up into a standing position. Right now, I have this thing with my eyes. They kind of bend in, and so if I look at my feet there’s no depth perception at all, and my vision overlaps. I become tired because I am always working to straighten them”.

She consumes nutritional supplements and is very aware of her physical limitations surrounding food consumption. She takes iron supplements to manage her anemia and a regimen of other medications to regulate various side effects. Sarah remains vigilant in receiving her required number of vitamins and nutrients.

Sarah fondly remembers Thanksgiving of 2020. “I ate more than three bites of food. It was spinach and strawberry salad. It was so good! I ate it for every meal that weekend”.

While walking the dogs, Sarah uses a cane to navigate the terrain, at her father’s suggestion. She is determined to remain independent as best as she can under her current circumstances, by optimizing the tools, mobility aids and resources available to her. “I put items in the same place, so I know where they are. I wear shoes in the house to steady my gait. I use a pill box to remember to take medication and supplements. I try to depend on myself as much as I possibly can”, she says. 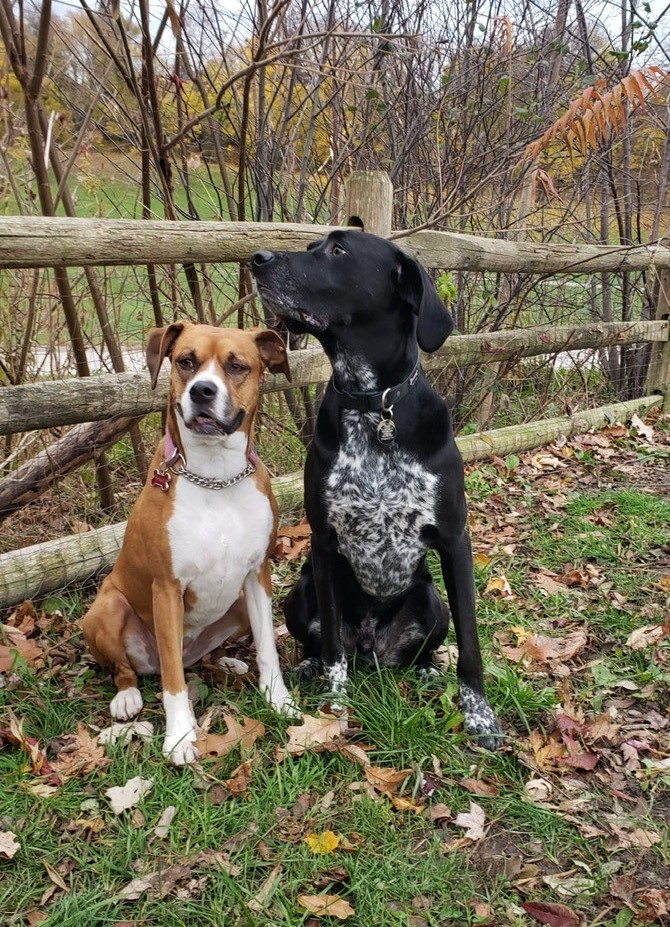 “My responsibilities and roles have shifted throughout my brain tumour experience. I can look after the dogs, but in a slightly limited capacity. I can go for short walks, and I can care for them in-home. I feel lucky enough to be able to still contribute to our business in a positive and productive manner.”

Her persistence also reflects in her academic achievements, despite having multiple surgeries on her brain. “Even though I have been “lost for words”, I have managed to complete a Bachelor’s degree in English, without any help”.

While her parents, Mary, and Al, along with Todd remain her biggest advocates, she attributes her rehabilitation progress to her medical professionals. She describes her current neurosurgeon as someone who “really knows what they are doing and concentrates on just the brain”. Sarah also recalls the times different nurses made her hospital stay comfortable.

With guidance of her therapist, she is encouraged to take inventory of her day. “She said write down everything you do every day– from getting up in the morning to brushing your teeth. That way, I can look back at the weeks and days and see that I have been contributing. I did a bunch of laundry and I looked after the dogs.

She furthers her learning and education by regularly attending Brain Tumour Foundation of Canada’s virtual support group meetings, hearing from others who have also experienced a brain tumour.

“They are absolutely amazing. It’s nice to be around or to talk with people who get it. They understand the lack of energy, eating or the issues that you go through. It may not be exact, but it’s similar and very comforting. For example, one woman was describing her experience with ataxia. I wrote it down, and when I saw what it meant, I could relate to that. My non-dominant hand shakes all the time. I would never have realized that if I hadn’t attended that virtual meeting.” 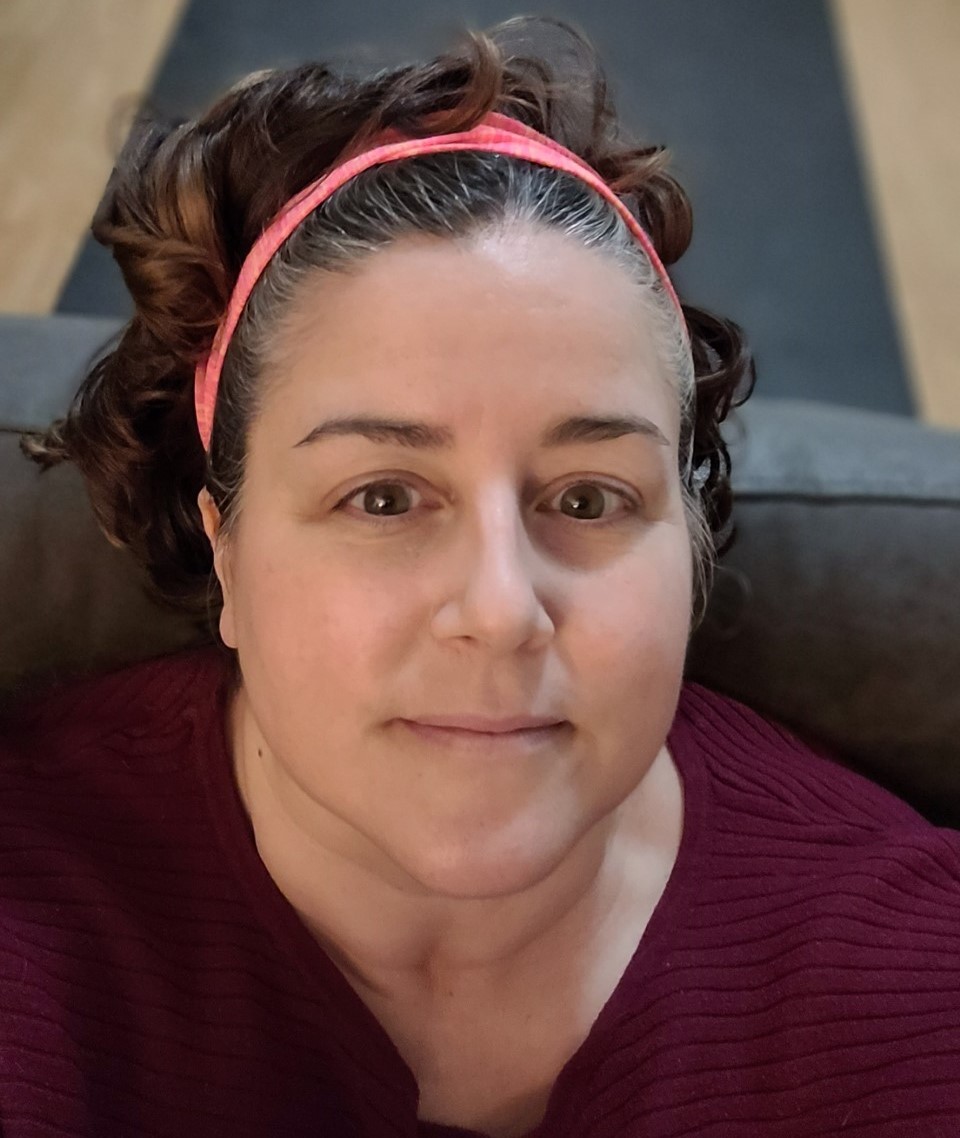 She chuckles that Todd often tells her she barely talks during the meetings; Sarah responds, “I’m listening and learning.”

Having endured over 25 years of trauma and pain, the healing process has been arduous for Sarah. The frantic stress has started to subside. “I know there’s good days. There are probably some great days. I think I’ve learned something through all of this, so it’s a learning curve. It’s very difficult to have been so viable, then suddenly, have these things happen”.

It takes courage, strength, and determination to remain hopeful. Sarah hopes we can find an end to brain tumours.

She continues to learn from herself, others, and the folks at Brain Tumour Foundation of Canada so she can empathize, educate, and engage with people with similar conditions. Sarah remains positive, upbeat and continues to find quality so she can live life to its fullest.