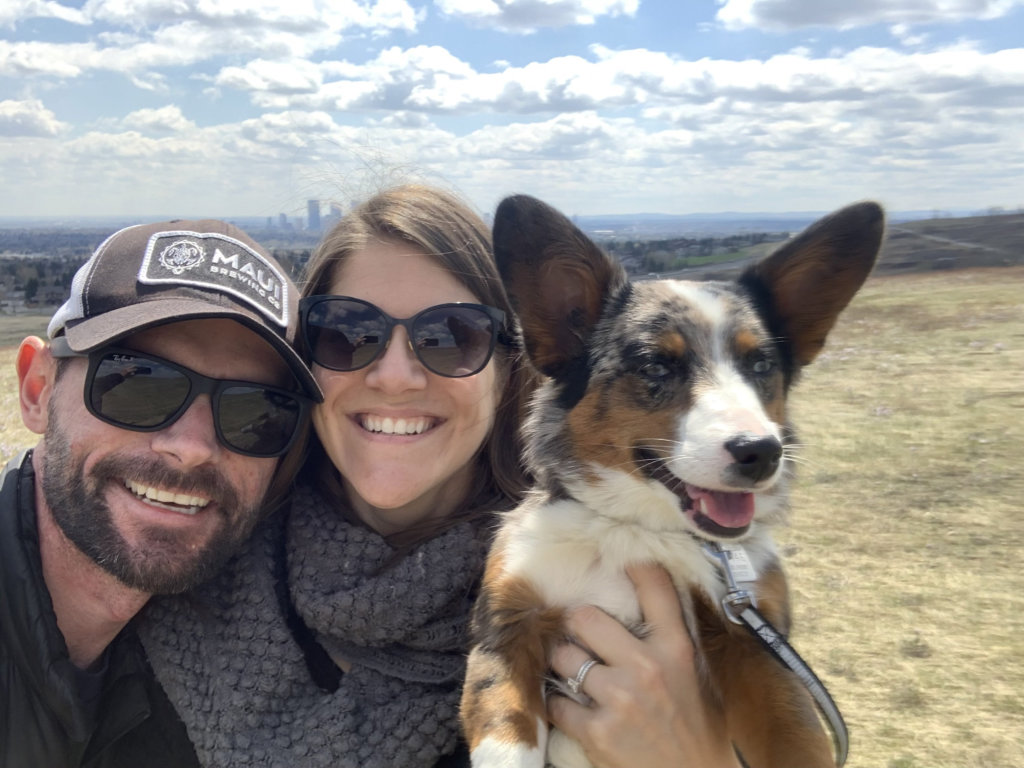 I am a 38-year-old living in Calgary. Originally from Australia, I have been in Canada for 12 years, happily married to my beautiful, amazing, and supportive wife Donica for six years now.

At 36 I suffered a grand mal seizure while working out at my local gym in Canmore at the time. A CT then showed a mass in my right frontal lobe. As Canmore had no MRI machine, I had to wait for the following day when I was taken to Calgary for an MRI that indicated I had a low-grade glioma.

Luckily, the biopsy determined a grade 3 Oligodendroglioma along with other markers (IDH mutant, 1P 19Q co deletion, MGMT methylated), to indicate a better prognosis and determine most responsive course of treatment. The following months were very difficult for Donica and I, but we were fortunate in having two neurosurgeons as close friends in Australia to guide us through the intense information and the unknowns of surgery, radiation, and chemotherapy treatments. 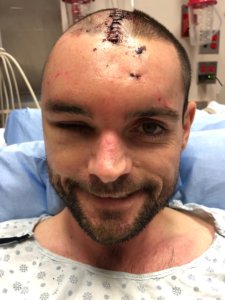 I have not been able to drive for most of the last two years, so my ever-supportive wife Donica has been driving me to and from the endless medical appointments. We both recall the drive to the Tom Baker Cancer Centre – 100km from our home – for 33 radiation sessions as one of the most stressful periods to date. We made this journey five days a week for seven weeks, with occasional stays at the hospital hostel.

Later in 2019, I commenced 12 months of chemotherapy. During that period Donica and I decided to leave the amazing mountain town of Canmore and move to Calgary to be closer to the Tom Baker Center and closer to Calgary International Airport where Donica worked as a flight attendant for Air Canada.

Comically, since we moved in April 2020 (Start of COVID 19) all my appointments except for MRIs switched to virtual and Donica has been temporarily laid off from Air Canada. Despite this we are happy with our move to Calgary being closer to family and friends and dog parks for our puppy, Bella.

Donica and I have enjoyed the chance to spend more time together as we both used to work away from home.

Throughout treatment I was chronically fatigued, but it was the changes in my personality, mood, and cognitive functions post-surgery that caused the greatest difficulties and frustrations for both of us.

Thankfully the list of appointments has now reduced. The 12 months of chemotherapy finished in May last year, and my most recent MRI showed what’s left of the tumour to be stable, which means MRIs are now quarterly. 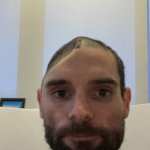 Recently I have had some additional complications, where I was admitted to the Foothills with what was assumed to be COVID-19. A chest X-Ray showed that I had pneumonia. Hard to believe I was relieved to only have Pneumonia…

In February this year I noticed some swelling over the bone flap from my original craniotomy. I was once again admitted to Foothills with concern that there was an infection causing the swelling. A few days later I had another surgery to remove the bone flap that had a staph infection.

I have spent the last 8 weeks on IV treatment with a PICC line. The infection remained after the first six weeks of treatment and now I am in the middle of another six weeks before I can get my bone flap replaced. Until then I am walking around cautiously missing some of my skull.

Despite all these setbacks I am grateful that there has been no further cancer progression or decline in cognitive function and I have been able to remain positive.

All the changes and uncertainties regarding the future has had a massive impact on our lives and priorities. We are considering a move to Australia, and have some major travel plans high on our agenda – once safe to do so.

In the meantime, along with a group of our Aussie mates, we formed the AusCan Team, trained, and fundraised for the 2021 Bike Ride for Brain Cancer in Australia – raising over $30,000!

Knowing that brain cancer research is continuing pushes me to do everything I can to live a happier, healthier, and hopefully longer life.

I am very happy to have had the opportunity to share my story and what I have learned over the last two years with anyone who has recently been diagnosed with this devastating disease. My wife also understands how difficult this situation is on a partner and caregiver and is also happy to speak with anyone in our situation.