In 2014, Georgia Trimidas’ cousin, Ari, was diagnosed with a malignant brain tumour.

“The news was devastating; not only for Ari, but for everyone who loved him,” she says fondly. “Despite his diagnosis and going through many treatments, Ari was always available to help others by sharing his personal experience and participating in support groups.”

She also remembers her cousin being the captain of Team Ari in the Montreal Brain Tumour Walk.

Georgia is a member of the Montreal chapter of an International Hellenic organization called Daughters of Penelope.

“Part of our mission is philanthropy and raising awareness. The members knew how close I was to Ari, and we decided to create a team, raise funds for the Brain Tumour Walk, and participate in the walk with Ari,” she states.

Georgia and her team participated every year afterward. In 2019, they walked the last physical walk with Ari, who sadly lost his battle to brain cancer on December 27, 2019.

“It was a difficult period for his close friends and family,” she remembers. “Then, in 2020 the pandemic hit. Brain Tumour Foundation of Canada was going to host a virtual walk on June 27th of that year.” Georgia, Ari’s sister Anna, and friend Giulio saw this date as a sign that the fundraising must continue; Brain Tumour Foundation of Canada reports that 27 Canadians on average are diagnosed with a brain tumour.

Together, Team Ari and Team Daughters of Penelope merged to create Team in Memory of Ari.

“We created a campaign that emphasized fitness. Gina Capone, from GFIT. 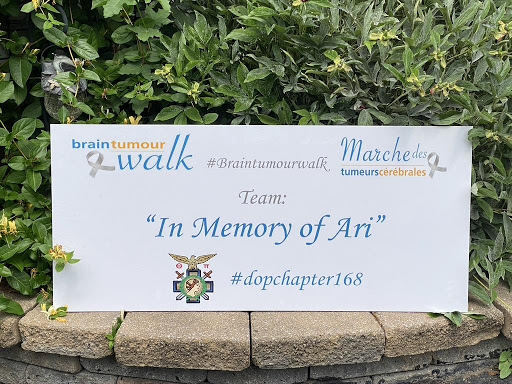 Villery gave an exercise session in the park, as well as a virtual class. On June 27, 2020, our team had a private walk in the park in honour of Ari. Friends, family, and everyone who had previously participated in the walk had attended,” says Georgia.

In 2021, the team decided to participate once again in the Montreal Brain Tumour Virtual Walk, creating a campaign spanning over several months, and hosting a virtual fundraising event on April 16, 2021.

“We had Chris Dedes, who is a Greek wine promoter, take us through a virtual wine tour around Greece. We also had a Brain Tumour Foundation of Canada volunteer, Hedy Newman, speak about her experience as a volunteer and the different services the foundation offers,” says Georgia.

As of May 23rd, 2021, Team in Memory of Ari planned to collaborate with Super Recycleur, collecting clothing and other donated items, and have their unofficial walk on June 27th, 2021. A monetary amount per kilo of the items weighed would have been donated directly to the team.