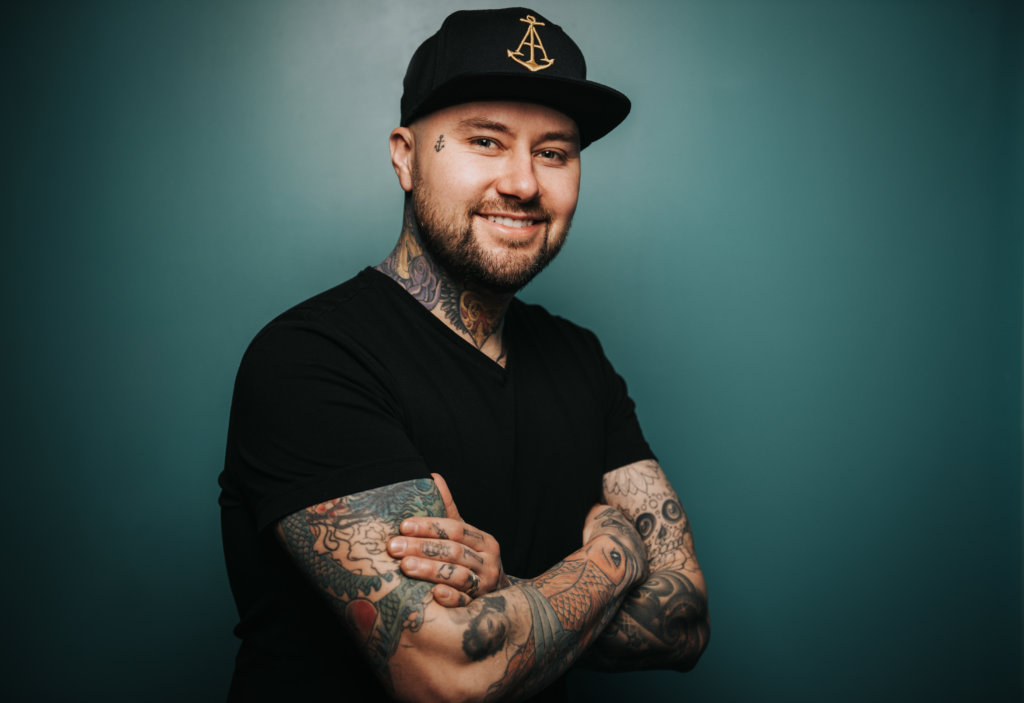 My name is Aaron Allen. I’m a husband, a father of two and a country music singer songwriter.

I always knew I wanted to be a musician. Music’s been there to see me through everything good and bad that life has thrown at me.  It’s saved my life more than a few times.

I was 13 at the time. There was something wrong with my mother. I ran into the kitchen to see what was wrong and I saw my mom laying on the ground. She was in an altered state I couldn’t comprehend.

She was extremely confused and not making any sense. Her eyes were open, but it seemed as if the person staring back at me was a stranger. I still remember the look on my brother’s face. It was a vulnerable fright like I’d never seen before. I can only assume my reflection painted the same picture for him.

Little did I know that foreign event would soon be as normal to me as brushing my teeth. My brother, age 8 at the time and our neighbour had called the ambulance to the best of my recollection. The paramedics arrived and my mom was safely on her way to the hospital.

At the hospital we learned why my mother had suffered a grand mal seizure. She had a brain tumour. Further testing showed that my mother had actually had this tumour as a child. It grew with her all those years intertwining itself around vital areas in mother’s brain making it impossible to remove. Unknown to any of us, my mother’s days we numbered long before the doctor told us so.

Our surgeon was a brilliant doctor by the name of Dr. Del-Maestro. If anyone would break the news to us that my mom had terminal cancer, I’m forever grateful it was him. Through the years he was delicate and kind, a matter of fact but compassionate and many times he was hope where there was none to be found.

We were informed my Mom would die from this affliction, but it would be another 16 years before that silent killer finally succeeded in its quest. She was strong and she fought like hell. Those next 16 years were anything but easy. There must have been a dozen surgeries or more. Too many for a young teenager to count.

The tumour would grow, and they would remove what they could. This was not to stop the inevitable, only an effort to buy her more time. After every surgery she would return home and recover only to do it all over again.

I didn’t really cope well with things at the time.

I was angry as hell at the world, and had no way to get this anger out of me. It was all bottled up inside. I started to get into trouble. It was extremely routine for me to be brought home by the cops any day of the week. Aside from my flourishing criminal career I was flunking out of high school. The only thing in life I really enjoyed was writing songs. I would lock myself in my room, away from the world and write one after the other. Thousands. I could not wait for an emotion to leave me and live on the page.

Trouble finally caught up to me. By the age of 14 I had so many criminal charges against me I was given the option to do four months in a juvenile detention centre or four months in an institution for children with various issues, in my case emotional problems.

I chose the institution, C.P.R.I. here in London, Ontario. I mention it by name because I’m grateful. The four months I spent there changed me forever. It was there where I decided to stop my destructive behaviour and try to move my life in a more positive direction.

The years went on. I tried my best to walk a straight line. I didn’t get in trouble with the police anymore and all criminal activity was in my past. But I was still angry. This led to a lot of conflict in the household. I knew I was making things worse; it was time for me to leave.

I was only 16, maybe 17 at the time but for all of our sake I needed to go. I regret not stepping up to the plate and leaving my 12-year-old brother behind to take care of our mother but I felt at the time it was my only option. I took a job at a factory to pay the bills and school fell by the wayside. I never graduated high school.

I would feel lost for many years from then on.

Although I no longer lived at home, I was still there for all the surgeries that ensued over the years. I was there to see her decline every step of the way. Even though my mom and I didn’t get along most of the time I loved her very much and it killed me to watch this happen.

I was 27 when things got really bad. We had a couple close calls and she was losing the use of the left side of her body. With my wife’s blessing I quit my job and devoted my time to taking care of my mother. We had a lot of great times together over the next 7 months. We didn’t fight. We made up for lost time, we forgave and left the past in the past.

She died two days before her 47th birthday.

What now? I felt like all those years I was just existing, just going through the motions. I was in a reality that cancer created. It was time for me to take my life back. I let cancer steal 16 years from me and I wasn’t going to let it steal a second more. I decided to write my GED. It had always bothered me that I didn’t graduate high school. After that I went to college, graduating with honours at the top of my class.

I eventually became a hairstylist, then a tattoo artist and business owner. My passion though had always been music and 2019 would prove to be a huge year for me in music. I had two singles break the Canadian top 100 at country radio and my new record Highway Mile has over 2.5 million streams since its April 3, 2020 release. I recently signed a Co-Publishing deal with Arts & Crafts Publishing. I can actually make a living at being a songwriter now.

That dream that started all those years ago is now my reality. Events in our life shape the outcome and if not for the experiences we went through I would not be where I am today. I’m happy. I’m grateful I’m living life.

To learn more about Aaron and his music, visit his website.