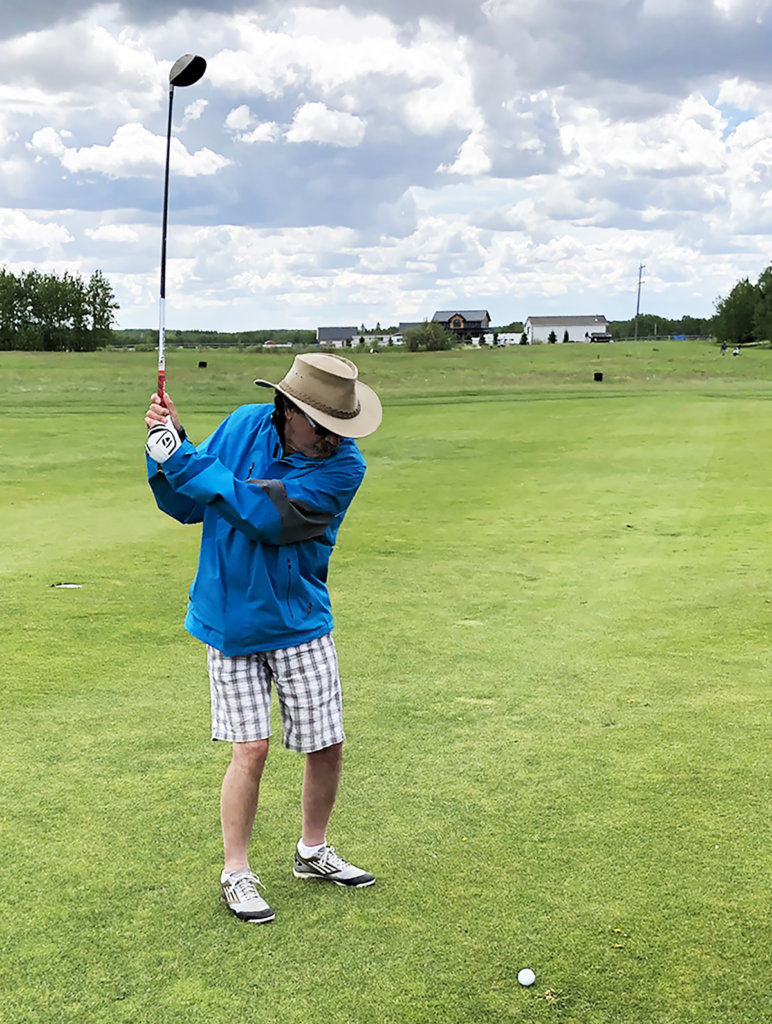 On a cool and cloudy early day in June, my friend Pete and I drove out to the Northern Bear golf course. Course openings were delayed due to the COVID-19 pandemic, but my golfing friends were all on the links in May once they opened.

My goal was to be golfing by August. But, I was getting the itch and decided why wait until August when I could be out there now?

Before we go further, I should explain…

I am a brain tumour survivor.

I was diagnosed with a hemangioblastoma tumour in February of 2019 and had it removed that March. It was about the size of a golf ball and located in my cerebellum, which controls your balance and ability to walk.

On this day, I was wearing shorts, a golf shirt, my Aussie chiller hat and a light blue rain jacket. Shorts were the choice of summer wear even though the official start of summer was still a week and a half away. The drive to the course was pleasant, light conversation about course conditions and the COVID situation.

I was excited to be getting on the links and socializing again with friends.

Following my surgery, I spent two months in intensive care and three months at the Glenrose Rehabilitation hospital where I learned how to walk again. It was time to put all that hard work to use on the course.

I could feel the chill in the air wrapping itself around my exposed legs. I zipped up my rain jacket for extra protection while Pete grabbed our golf bags from the trunk.

There is a slight incline up to the pro shop entrance that I would have to walk up to enter the building. I was determined to scale this mini-Everest and get in there to pay for my round of golf.

I firmly planted my cane on the asphalt, stood up and slowly made my way to the pro shop entrance. The cool air hung heavy over me during the assent.

I could feel my legs get heavy as I neared the door.

As a result of my operation I have ataxia in my left arm and stiffness in my leg muscles, along with compromised sight. My eyes became crossed after the operation causing double vision.

A patch over half of my glasses lens helps prevent that.

Pete held the door open for me as I crossed the threshold. I paused to let the warm air engulf me while looking at the young man behind the till. His eyes were as big as saucers as he looked back at this frail man who just walked into the pro shop.

I am sure he thought, “Is this guy going to golf?”

We greeted each other and I told him I would be playing nine holes of golf over the 18. I paid for the nine holes, but I don’t believe I told him my story. I didn’t need to – I was there to golf for the first time since my diagnosis. This was a new chapter in the making.

After paying, I made my way back outside to the cart. Pete followed carrying the blue handicap flag that would be attached to the cart. As I am still mastering the art of walking, it will now be an added requirement. 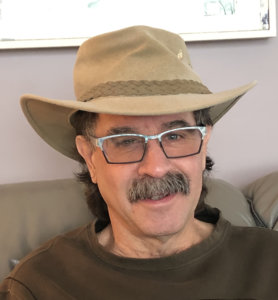 We made our way to the driving range to warm up before our tee time. I clambered out of the cart, picked out a few clubs from my golf bag and slowly walked up the small slope to a level spot at the end of the range.

The stacks of practice balls were aligned in a nice row about fifty feet from where I was standing. Pete quickly realized I required some balls to practice with, gathered a bunch up and brought them to me.

Walking too far today was not an option, I had to save my energy to hit the golf ball.

The goal for the day was to make solid contact with the ball and not much else. I grabbed my eight-iron, scooped a range ball from the pile and located it to a nice patch of green in front of me. There was a small target green about one hundred and fifty yards out.

I took a couple of practice swings. It felt good.

Time to hit a ball.

I stared down at the white orb in front of me, knowing that I could do this. I drew the club back, gave it a mighty heave forward and struck the ball. It travelled about 100 yards – 50 yards shorter than I would normally hit an eight iron. I hit a few more and they all travelled about the same distance.

I grabbed my five-iron hoping for better results. I did get more distance with the five-iron but again not as far as I could two years ago. I realized after being in hospital for five months – and losing over 30 pounds on my once 170-pound frame along with muscle mass – that I can’t hit the ball like I used to.

I would have to play the game different, and smarter now.

I could always hit my driver well. It was time to give it a go, I picked it up, yanked the head cover off and gingerly bent over and teed up a ball. I made good contact, the ball sailed in the air and rolled up to the target green in front of me.

I was chilled but happy – Happy to be doing something I love again and happy to be among my golf friends again.

Tee time was upon us so we were off to the first hole. I greeted Bob the starter, who wrote down the cart number and offered me a scorecard. I politely told him I wouldn’t need one as my goal for the day was just to make contact with the ball.

We pulled our carts up to the white tees, and I waited as the other three in the group teed off. When it was my turn, I maneuvered the cart to the forward tee, and slowly made my way to the tee box, driver in hand.

Once teed up, I stood back and took a bead down the fairway. Looking down at the ball. all the anxious thoughts of being there and the first tee jitters engulfed me.

I chased those from my mind. I could do this!

I took a deep breath, let it out and swung at the ball.

It arced through the air and landed on the right side of the fairway in the first cut of rough about 150 yards out – far from the spot I was hoping it would land near. My three golfing partners shouted some words of encouragement and we were on our way. 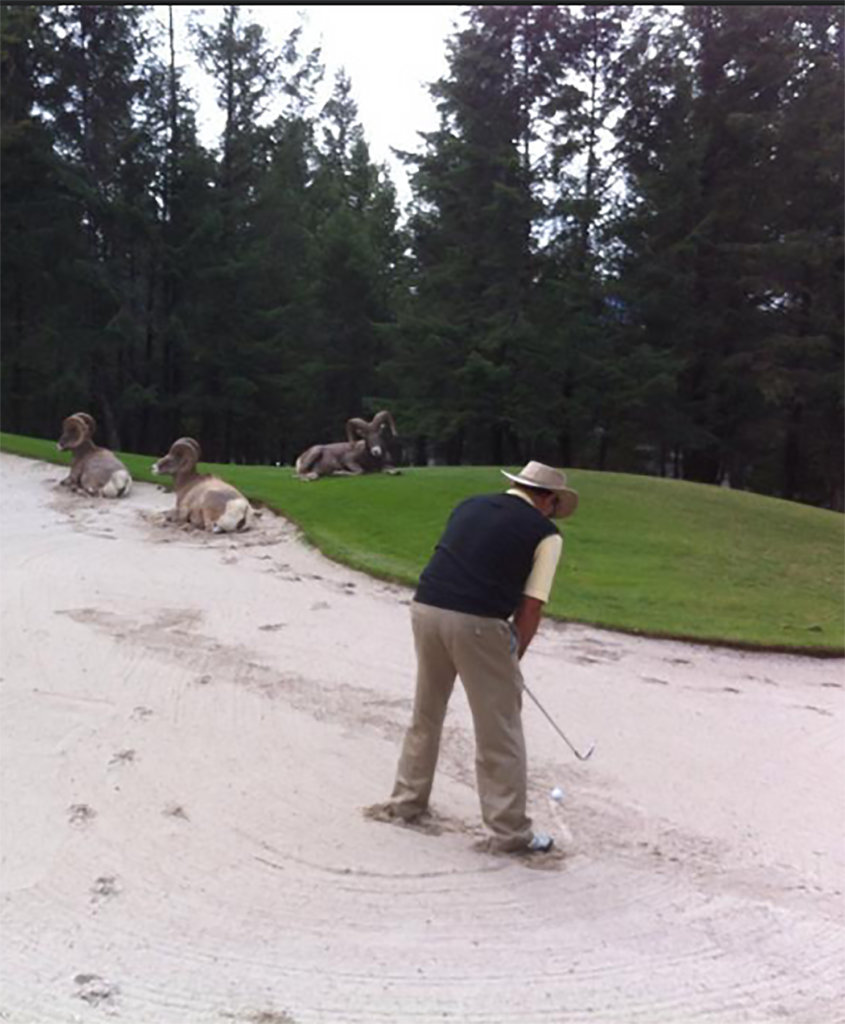 The first few holes I was just getting used to hitting the ball again, let alone hitting is straight. I adjusted my stance and began to hit them down the middle of the fairway.

Putting, I learned, would also require some fine tuning. My compromised vision caused everything to look flat. I couldn’t read the greens anymore. I relied on the other members in the group to tell me which way the putt was going to break and if I was putting up or down hill.

The day was a success, I made contact with the ball and got through nine holes of golf.

I was exhausted but happy that I was able to play.

Since that day in June I worked my way up to playing 18 holes and started playing twice a week in August. I crushed the goal I set out for myself! Golf is a mental and physical game and it has helped me in both those aspects of my recovery.

I am grateful to my father who introduced me to the game at an early age. It took a lot of courage, and I’ve had struggles and triumph’s but through it all I have gotten stronger in my walking ability and my game improves a little bit each time I get out.

Thanks Tom, Pete, Trent, Tim and the rest of the gang for helping me out on the course when I needed it. Especially getting out of the bunkers! I am a survivor and it is estimated that 55,000 Canadians are surviving with a brain tumour. Every day in Canada twenty-seven people are diagnosed with a brain tumour and there are over 120 different types of brain tumours.

To help brain tumour survivors like Mark, and the 27 Canadians diagnosed each day, please give. You can give in multiple ways, learn more.