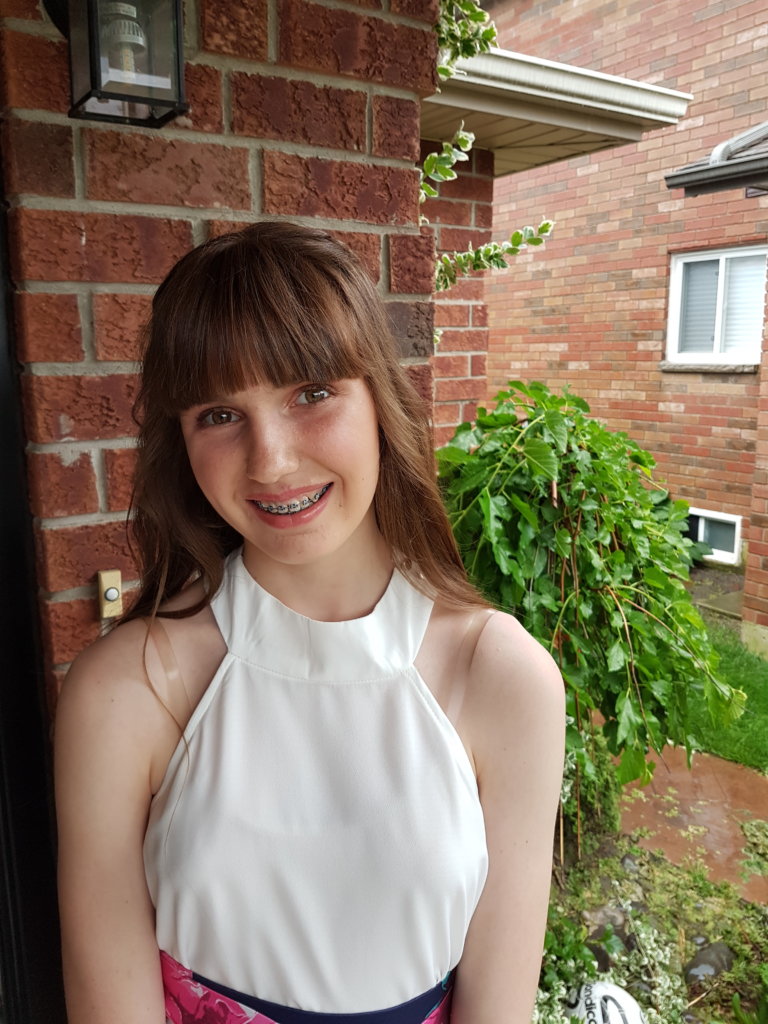 Few people hold the titles of author, spokesperson, philanthropist and businesswoman at the age of 15, but Mckenna Lumley of Windsor is all of the above. The Walkerville Collegiate Institute student has demonstrated creativity and dedication to raising awareness and funds for the brain tumour community in her writing and through her ‘Glitter Glam’ tattoos initiative.

Brain Tumour Foundation of Canada is proud of Mckenna’s hard work and leadership, and is happy to recognize her with a national Outstanding Youth Volunteer Award.

The Outstanding Youth Volunteer Award is a national honour given to a youth aged 19 or younger who has shown initiative, innovation and commitment in volunteering, and provides inspiration to the brain tumour community.

A decade of hope

Mckenna has been involved with Brain Tumour Foundation of Canada ever since her diagnosis at age four. At the time, there were no organizations that offered support specific to non-malignant tumours, which led her to the organization and a decade of hope, awareness and fundraising.

In 2018, Mckenna appeared in radio ads across Canada promoting the Brain Tumour Walk program, which she has participated in since 2010.

In 2015, she started a business with her friends called ‘Glitter Glam: Tattoos for a Cause’ at her school, donating all the proceeds to Brain Tumour Foundation of Canada. It was a venture that earned her national recognition when, in 2018, Glitter Glam exhibited at the Brain Tumour National Conference as well as the Toronto Brain Tumour Walk the following year.

Over the past few years, she has raised more than $8,000 for Brain Tumour Foundation of Canada through the support of her St. John Vianney Catholic Elementary Schools Family and her efforts have brought in over $200,000 through the BTFC walks.

Mckenna is a creative soul, and while she has trouble with writing, she has written many books in her head which she is happy to share verbally. In 2018 her story, The Secret Portal, was included in the book,  Inspiring Stories of Canada’s Heroic Youth: Awaken Your Inner Hero, Volume One – a copy of which is proudly displayed in the Northey Family Library at Brain Tumour Foundation of Canada’s head office in London, Ontario.

Mckenna’s imagination knows no bounds. Her chapter in the ‘Awaken Your Inner Hero’ book is “I am imaginative”. Her passion, drive, and focus on finding a cure for brain tumours, is inexhaustible.

As a young advocate, Mckenna has often spoken publicly about her experiences for Children’s Hospital and during Brain Tumour Awareness Month. Her reason is as simple as it is inspiring:

Brain Tumour Foundation of Canada is incredibly proud of McKenna and the leadership she demonstrates at such a young age. She embodies the spirit of the Outstanding Youth Volunteer Award in a way that inspires all ages.

She will be receiving her award virtually this year, as part of Brain Tumour Foundation of Canada’s volunteer recognition ceremony Friday, November 20. She is one of just three youth across the country selected to receive the honour.

Back to Top
Next Volunteers