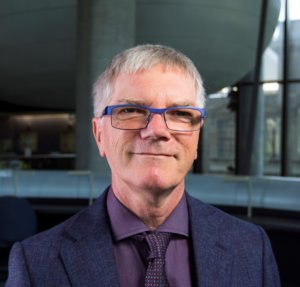 The effectiveness and normal tissue toxicity (including the normal brain) will be assessed. Our team includes neurosurgeons, Dr. James Rutka who treats GBM, thus if we are successful, we plan to advance this radiation nanomedicine to a Phase 1 clinical trial in patients with GBM.

What receiving this award means to Raymond:

“My research team is tremendously excited to receive support from Brain Tumour Foundation of Canada. This support will allow my team to test a new idea for preventing recurrence in patients with glioblastoma multiforme (GBM), which is one of the most difficult to treat and unfortunately one of the most common forms of brain cancer. Despite surgery, radiation and chemotherapy, recurrence remains a major challenge in treating GBM, contributing to the poor outcome in patients. We plan to study a new local form of radiation called a radiation nanomedicine that could be administered locally at the time of surgery to eradicate any remaining tumour and reduce the risk of recurrence. We could not study this new radiation nanomedicine without the support of Brain Tumour Foundation of Canada.”

This research project aims to develop a new radiation treatment for glioblastoma multiforme (GBM) called a radiation nanomedicine that could be infused at surgery into the brain to eradicate any tumour that the surgeon is unable to remove.

The long-term goal is to reduce the risk for recurrence of GBM and thereby improve the longterm outcome of patients with this very poor prognosis form of brain tumour. In the first year of the project, we synthesised the radiation  nanomedicine and studied its retention in human GBM tumours implanted into the
brain in mice. The radiation nanomedicine was strongly retained in the brain tumour and did not re-distribute into the normal brain or to normal organs outside the brain.

This is a very promising finding since it means that the radiation nanomedicine will deposit radiation only in the tumour and not in the normal brain or other normal
organs, which should maximize its effectiveness for treatment of GBM, while  minimizing any toxicity to the normal brain or normal organs.

The project is on track. In addition, the support of the BTFC has allowed us to be successful in obtaining additional major funding from the Canadian Cancer Society as an Innovation Grant (2020-2022) to extend the idea to another radioisotope, mercury-197 that emits a different type of radiation (Auger electrons) and combine the radiation nanomedicine with immunotherapy for treatment of GBM.